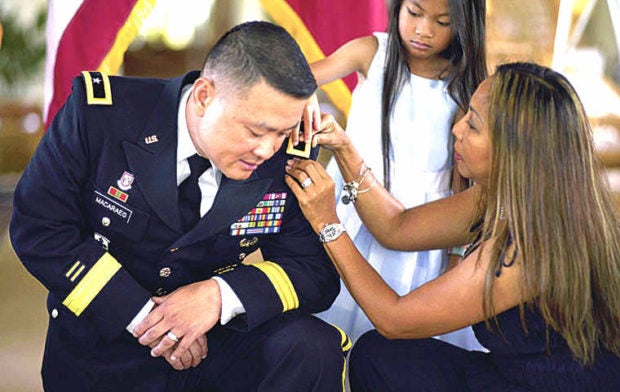 Brig. Gen. Roy Macaraeg’s wife, Bene, and daughter, Chloe Anne, pin his new rank on his shoulders during a ceremony at Washington Place, in Honolulu on Tuesday.  HAWAII, DEPARTMENT OF DEFENSE

HONOLULU – A Filipino colonel in Hawaii’s Army National Guard was promoted to brigadier general, becoming what is believed to be the first Filipino soldier to attain the rank of general officer in the history of Hawaii’s citizen soldier ranks, Gov. David Ige’s office reported.

Col. Roy J. Macaraeg was given the rank of brigadier general in the state’s Army National Guard in a ceremony on Tuesday at Washington Place.

Ige administered the oath of office to Macaraeg, who is headed to the National Guard Bureau in Washington, D.C. to be assistant director of the Army National Guard for sustainment, installation, and environmental issues.

Maj. Gen. Arthur “Joe” Logan, head of the Hawaii National Guard, Macaraeg’s family and friends, and current and retired colleagues from the Guard attended the ceremony.

Macaraeg joined the Hawaii Army National Guard in 1990. He was named soldier of the year in 1993. He commissioned as a field artillery officer in 1996 upon graduation from the Hawaii Military Academy, Officer Candidate School.

During his 29-years of service, Macaraeg has held posts at the Pentagon and had been deployed to Iraq, Kuwait, and Kosovo, the governor’s office said.

Macaraeg graduated from Farrington High School. He is married to his high school sweetheart, Bene. The couple has a 7-year-old daughter, Chloe Anne.