Joe Biden’s campaign lashed out Wednesday at Facebook for refusing to block an ad from President Donald Trump which the Democratic candidate said included “definitively debunked conspiracy theories” on Biden.

The Biden campaign responded after an exchange with Facebook over a Trump ad which accused Biden of improper dealings with Ukraine while he was vice president.

I’m about to take the stage in New Hampshire to discuss the grave threat Donald Trump poses to our democracy and the action we must take. Tune in now: https://t.co/PNjixxCxrn

“It is unacceptable for any social media company to knowingly allow deliberately misleading material to corrupt its platform,” Biden spokesman TJ Ducklo said in a statement.

“Donald Trump has demonstrated he will continue to subvert our democratic institutions for his own personal gain, but his shortcomings are no excuse for companies like Facebook to refuse to do the right thing.” 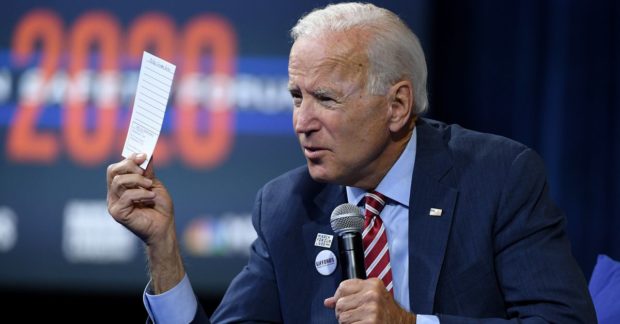 The comments from Biden highlighted a growing controversy over social platforms’ decision to steer clear of fact-checking political ads or comments by politicians.

The Trump ads state that “Biden promised Ukraine $1 billion if they fired the prosecutor investigating his son’s company.”

A letter from Biden’s campaign to Facebook, obtained by AFP, said this statement had been “demonstrated to be completely false.”

The letter said Trump and the Republican Party have used this ad “that spreads false, definitively debunked conspiracy theories regarding Vice President Joe Biden” and urged Facebook to take it down.

The ad was rejected by CNN but has aired on other cable stations and broadcast networks as well as on YouTube and Twitter, according to media reports. Facebook, which released its response to Biden’s request, said its policy requires that any claim “directly made by a politician” be “considered direct speech and ineligible for our third-party fact-checking program .”

The leading social network has said it has not changed its policy on political speech but recently clarified that it would steer clear of fact-checking in such cases.

“Our approach is grounded in Facebook’s fundamental belief in free expression, respect for the democratic process, and the belief that in mature democracies with a free press, political speech is already arguably the most scrutinized speech there is,” Facebook public policy director Katie Harbath said in the letter to Biden’s campaign.

Biden’s response was the latest criticizing social platforms for allowing false claims from political leaders amid a concerted effort to root out misinformation.

Senator Elizabeth Warren, another presidential candidate, accused Facebook earlier this week of buckling to pressure from the White House over political misinformation.