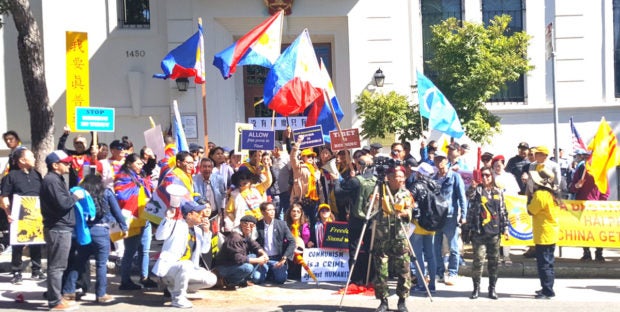 Leaders and members of the Filipino, Vietnamese, Tibetan, Hong Kong and Muslim Uyghur communities converged for the first time to denounce Beijing’s “bullying tactics” not only against its minorities, but also against neighboring smaller countries.

The protesters’ joint statement, “Unite and Oppose China’s Hegemony And Imperialist Aggression,” expressed strong opposition to “the aggressive and imperialist policy of China and its hegemony in Southeast Asian Sea (or South China Sea) as it imposes its ‘nine-dash line’ policy in clear violation of the sovereignty of its neighboring nations like the Philippines, Vietnam, Taiwan, Korea, Japan, Malaysia, Brunei and Indonesia.”

“• policy of illegally and forcibly of sending Muslim Uyghurs to internment camps for “re-education” as well as decades of occupation and repression of the people of Tibet;

FAHRA’S Ago Pedalizo reminded everyone in the rally that one of the top founding leaders of the China Communist Party Deng Hsiao Ping, in an address before the United Nations in 1974, strongly stated that, “If one day China should change her color and turn into a superpower, if she too should play the tyrant in the world, and everywhere subject others to her bullying, aggression and exploitation, the people of the world should identify her as social-imperialism, expose it, oppose it and work together with the Chinese people to overthrow it.”

“It is remarkable that countries oppose to China have come together for this protest rally in accordance with what Hsiao Ping told the UN,” he noted. 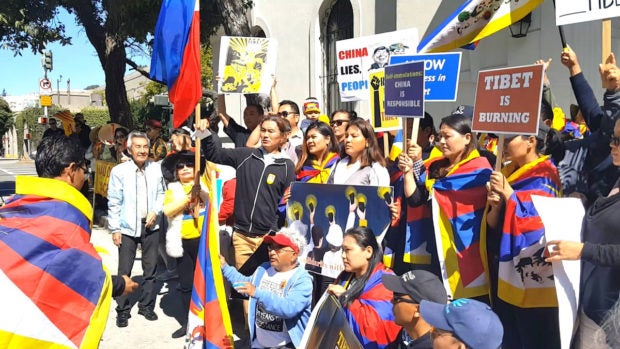 Protesters from different countries opposed to China vow to meet and stage another protest rally at the Chinese Consulate on December for the International Day of Human Rights. INQUIRER/Jun Nucum

Another FAHRA leader, Donny de Leon, thanked Vietnam whose fishermen “saved the lives of Filipino fishermen whose fishing boat was rammed by a Chinese fishing vessel and were left to fend for themselves.”

De Leon also denounced China’s ploy to extend a helping hand even in Africa but charging countries high interests and then taking territory for these countries’ failure to pay.

A Hong Kong protester wearing a mask to hide his face introduced himself as John Smith and spoke as “an individual who cares about individual freedoms and liberties which the Chinese government is not granting.”

“In coming here, I want to make people realize that what is happening in Hong Kong is very important to the world within the next coming years. We need to stand as united front to defend democracy and freedom,” Smith stressed.

Hong Kong protesters want the U.S. to pass the Hong Kong Human Rights Democracy Act to assert and keep strong the one-country two-system policy and ensure that the Chinese Communist Party cannot infringe on the rights of the Hong Kong people.

The Hong Kong Human Rights and Democracy Act of 2019 is a bipartisan legislation reintroduced in the light of the 2019 Hong Kong extradition bill proposal and the ensuing protests against China.

Representatives of Hong Kong protesters Denise Ho and Joshua Wong urged members of the U.S. Congressional-Executive Commission on China in September 2019 to ask support for the bill, which is not “an inappropriate U.S. involvement in another country’s affairs.”

Dorji argued that China is slowly globalizing its policies on Hong Kong and Tibet. He urged “the people of the world to stand united so we can stay happy and peaceful enjoying basic human rights.”

Vietnamese rally leader Jeff Doan likewise condemned Beijing for its occupation of neighboring islands in the South China Sea that belong to Vietnam and Philippines.

“They harass the fishermen, they grab, rob, kill (the resources) and occupy lands. They disturb the countries. We ask them to stop that and we will stand up and defend our countries,” Doan stated. “We will boycott them, we will not buy their products.”

Doan, whose Vietnamese delegation was the biggest in the protest, with participants coming  all the way from Sacramento, vowed to come back to the Chinese consulate and hold a similar protest rally in observance of International Human Rights Day on December 10.