Faith that endures for 500 years and beyond

Faith that endures for 500 years and beyond 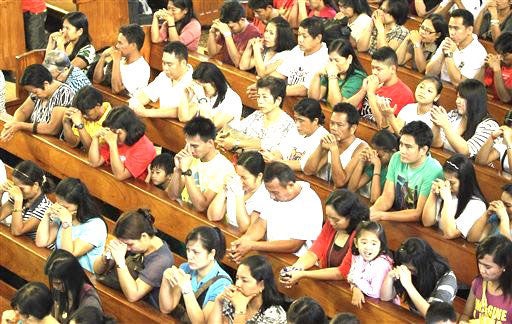 What made us strong as a people when not-so-good events like the Martial Law and Marcos’ human rights violations occurred? When “the whirlwind of transformations,” like the Cavite Mutiny and the execution of the Gomburza in 1872, affected us in the most despicable manner?

Enduring Christian Faith, that’s what. It’s the same Faith that makes us cling to the idea that Bathalang Maykapal (ancient Filipino name for God Almighty) can write straight despite twists and turns.

Enduring Faith make us believe in God’s providence even in the midst of persistently tenacious phenomena such as typhoons, EJK, traffic, frailocracia, cronyism, vote-selling, and religious fanaticism. Faith in God sustained us when, in 1521, after Datu Lapu-Lapu and his men killed Magellan, the newly baptized Rajah Humabon of Cebu poisoned the Spanish soldiers and literally wiped out almost all the remnants of the Magellan expedition.

During one of the sessions of the Second Vatican Council in Rome (1962-65), French Bishop Paul Gouyon recognized the reality of God speaking to humankind through events, adding that “an event is certainly the voice of God if its nature and effects are good”; that is, only when the effects are positive and constructive.

Likewise, French theologian Marie-Dominique Chenu, OP, declined to talk particularly of atheism, a phenomenon certainly of the evil type, as a God-bearing sign of the times. In their profound reflections on history, theologians like Gouyon and Chenu were inclined to think God was effectively not present if the effects of the historical signs of the times were abominable: Ateismo. Clericalismo. Massive poverty. Or the rise of tyrants and political dynasts.

Gouyon and Chenu’s belief could be applied to the rise of Freemasonry, definitely a not-so-good trend in Rizal’s time, when a host of our bright young men walked away from the Church and mocked the friars. Likewise, it could be applied to the 2016 election of Catholic-educated Rodrigo Roa Duterte, who mindlessly lambastes the Vicar of Christ and the Holy Trinity, and calls the saints drunkards, the Catholic Church the most hypocritical institution, the bishop thieves, and the priests gays.

Au contraire, Faith helps us, Filipinos, to consider all historical events, the good ones and the bad ones, as signs of the times that manifest God’s message to us. Why? Because, more than our natural resiliency, we believe in the deepest recesses of our souls that Bathalang Maykapal can really make a zigzag line as straight as an arrow, that his Divine Providence is sovereign above all, and that His Divine Will is always accomplished, one way or the other. It’s this kind of Faith in Mahal na Nazareno that makes us wear a genuine smile even in our agony or suffering.

Despite all human blunders and natural catastrophes, despite the disgraceful leadership of some flawed Churchmen, despite of the tittle-tattles triggered off by some imperfect politicians, and despite the shocking controversies of government agencies like BuCor and the PNP, among others, we have believed for 500 years that God accomplishes His plan of salvation just the same.

Faith sustains us and reminds us that, in essence, Bathalang Maykapal is omnipotent, omnipresent, omniscient, and omnibenevolent, and that His Divine Providence happens in His time, God’s favorable time, known among the Greeks as Kairos, when “He makes all things beautiful, in His time” (a contemporary song derived from the Old Testament, Ecclesiastes 3:11).

It is this Faith that transforms us into a people “gifted to give,” a Faith that gives us all the reasons to mark and celebrate in 2021 the 5th centenary of the arrival of Christianity to the Philippines, and be ever grateful to the Spanish missionaries who brought such grace to our noble nation.