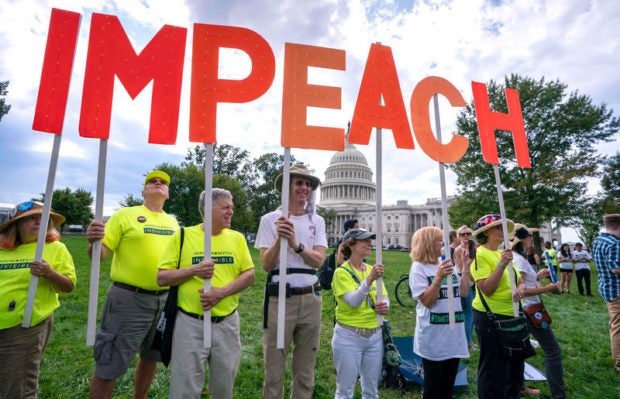 After all the whistleblower revelations in the Trump-Ukraine Affair, are you sticking with your guy and swallowing your own whistle? Or are you blowing it hard. It’s time to care about democracy.

If you came to the U.S.  as an immigrant, seeking a better life, think about what you were leaving. And what America is becoming.

In the case of my father, he left a Philippines wrecked by the Philippine-U.S. war, the adjunct to the Spanish American War. In the case of many Filipinos able to immigrate because of the Immigration Act of 1965, it meant escape from the autocratic and dictatorial rule of Ferdinand Marcos. Martial law in the Philippines saw an end to free speech, civil liberties, and press freedoms. And it was jarring to see the U.S. back Marcos create his dictatorship, while knowing he was distorting an American template.

Did Trump sound like Marcos this week when he left the UN and spoke to members of the U.S. mission at a private breakfast? Trump sent this chilling message to anyone who dared to be as patriotic as the Whistleblower:

“Who’s the person who gave the Whistleblower the information, because that’s close to a spy. You know what we used to do in the old days when we were smart, right, to spies and treason. We used to handle it a little differently than we do now.”

That’s the threat of a lawless man, who in 2016 infamously revealed his character and said at an Iowa campaign rally, “I could stand in the middle of 5th Avenue and shoot somebody and I wouldn’t lose voters.”

That’s a man who believes he’s above the law.

Time to blow your whistles hard, folks. All together now. Forget the partisanship. This is about love of country and what’s right.

All good patriots must unite behind the Constitution before Trump turns it into a MAGA-style paper hat. And it’s urgent because the impeachment inquiry in Congress is moving like Trump on laxatives.

From the breaking story about a Ukraine phone call, to Pelosi’s announcement of an impeachment inquiry, to secret documents revealed, it’s all coming out now.

Speaker Pelosi wants the investigation all wrapped up by Thanksgiving. (For nice dinner conversation, no doubt).

The whistleblower documents are that damning. They’re simple to understand. And they’re enough on their own. It makes the Mueller Report seem like “Moby Dick.”

You didn’t read the Mueller Report. But you can and should read the Whistleblower documents. But will you see them as urgent cries to save our democracy?

The rough transcript/memo of the call between Trump and President Volodymyr Zelensky of Ukraine shows Trump with the upper hand. Ukraine is desperately trying to ward off Russia and needs weapons. The U.S. has withheld nearly $400 million in military aid. Zelensky says he’s ready to continue to cooperate in order to buy more Javelins (anti-tank missiles) from the United States for defense purposes.

Then Trump dangles the first of two key words or phrases to look for in all this. Phrase that pays No. 1: “I would like you to do us a favor though because our country has been through a lot and Ukraine knows a lot about it.”

Trump wants Zelensky to look into a group, CrowdStrike, that hacked the DNC, likely because he’s still hung up about Hillary Clinton’s emails. That the conversation took place after Robert Mueller’s testimony shows you what was on Trump’s mind.

But Trump also suggests that his personal attorney, Rudy Giuliani, and the Attorney General William Barr call Zelensky look into another matter: a conspiracy theory spread around the internet about Joe Biden’s son and his dealings in Ukraine that’s been totally debunked. But it serves as opposition research on Trump’s main challenger for re-election.

That’s not how things are supposed to work.

Most people, especially Republicans, are willing to play along. Disruption is a virtue in these modern times. But Trump as a disruptor of the Constitution and democracy doesn’t play.

It took a Whistleblower, reported to be a CIA person assigned to the White House, to put it in a letter to Congress:

“In the course of my official duties, I have received information from multiple U.S. government officials that the President of the United States is using the power of his office to solicit interference from a foreign country in the 2020 U.S. election. This interference includes, among other things, pressuring a foreign country to investigate one of the president’s main domestic political rivals. The President’s personal lawyer, Mr. Rudolph Giuliani, is a central figure in this effort. Attorney General Barr appears to be involved as well.”

The acts described would be reason to consider the U.S. in full-blown constitutional crisis when the president shoves America aside and puts his own interests first.

That the nation’s chief law enforcer is in on this and making decisions on how this is handled is also troubling. And then there’s Rudy Giuliani, a private citizen, not a U.S. official, who has no right to be involved. It’s not a good look. And everyone knew it. And that leads to the cover up.

That people knew better is shown on page 3 of the Whistleblower document, “Efforts to restrict access to records related to the call.”

The Whistleblower said senior White House officials had intervened to “lock down” the call and place it into a computer system reserved for classified and highly sensitive information.

But the Whistleblower said one White House official described this act as an abuse of the electronic system because the call did not contain anything remotely sensitive from a national security perspective.

It did, however, show a patented abuse of power by Trump, a man who doesn’t seem to care about the constitutional restraints on the presidency.

The “lockdown” on the document was the cover up. And there’s our phrase that pays No. 2, the time-honored word in all slam-dunk political scandals. It’s the admission of guilt. In this case, you “lock down” or “cover up” when gaslighting is not enough.

But the gaslighter-in-chief doesn’t play that game. He’s above it all. So, of course, Trump chose to release the documents.

Hard to believe, but Trump and his cohorts actually believe they could release the damning documents and no one would care. Indeed, how you react to them may be indicative of whether Trump survives the impeachment onslaught–or finally gets caught by his own actions.

Maybe you don’t care, you don’t know, or are so alienated by politics that everything out of Washington seems like noise. That’s how Trump survives.

His “base” is thought to be largely racist male white supremacists. But a good number of them are just ordinary people—including Asian Americans— who just don’t care.

A phone call to Ukraine? So what? Ukraine? Who cares? That’s what Trump says. (He actually described the phone call as a “beautiful call,” a “perfect call.”)

And if he doesn’t care, a growing number of people—not involved in the media and political world— don’t care as well.

Trump’s their guy no matter what. They play follow the leader, and act like dedicated lemmings marching into the rising sea.

And that threatens to make 2020 seem like it’s 2016 all over again. Trump wins. Truth, democracy and the Constitution lose.

Ladies and gentleman, time to blow your whistles  harder.

Emil Guillermo is a veteran journalist and commentator. He writes a column for the Inquirer North American bureau. Follow on Twitter @emilamok.  Hear him on Apple podcasts.