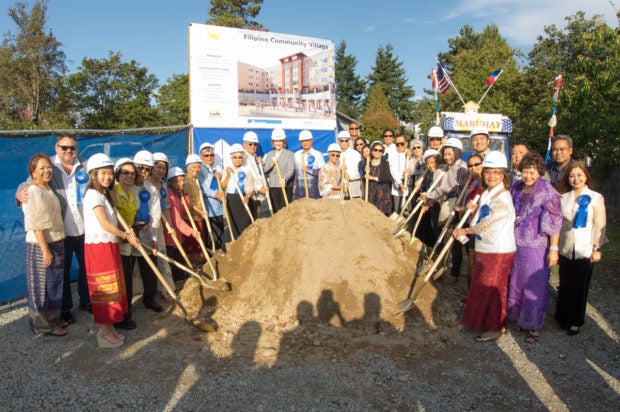 SEATTLE– A dream from more than 80 years ago finally became a reality in Seattle on Sept. 18 as more than 200 Filipino community members, elected officials, and donors celebrated the groundbreaking for The Filipino Community Village.

The $30-million plus Village, located adjacent to the longstanding Filipino Community Center, will have 95 units of affordable housing for seniors and house the Innovation Learning Center, a state-of-the-art computer laboratory providing technological access to young people.

Alma Kern, Co-chair of the Advisory Committee of the Capital Campaign for the Village and former Filipino Community Center president, opened the program by tracing the dream of Pio DeCano, Sr. and other Filipino cannery workers who pooled their money together to buy a small house in Seattle in the mid-1930s to have a safe place for Filipinos to gather.

It was a time when signs stating “Filipinos not allowed” were posted in public places and discrimination left the Filipino men isolated from the general society.  The workers donated part of their salaries to purchase what became their first community center.

Eventually, Kern said, in 1965 the Filipino community in Seattle built off the Filipino cannery workers initiative by purchasing an old bowling alley and turning it into the current Filipino Community Center of Seattle.  In 1975 the community paid off the mortgage and owned the center free and clear.  Today, it has become the center of diverse communities in Seattle. Co-chairs of the Advisory Committee of the Capital Campaign for the Village Alma Kern (left) and Velma Veloria “wouldn’t take no for an answer” say public officials they lobbied. MEL PONDER PHOTOGRAPHY

However, the dream was also about providing the Filipino seniors a safe place to live, and as gentrification and displacement began occurring in Seattle, the urgency to provide housing rose to the forefront.  Velma Veloria, the other Co-chair of the Advisory Committee, stated that this project was a ten-year effort but that many contributed their “blood, sweat and tears” to make it a reality.

Speaker after speaker including officials from the state, county and city lauded both Kern and Veloria for their great determination and unwillingness to take “no” for an answer.

The Filipino Community Village is designed by Seattle-based Filipino American Alex Rolluda and Bob Hall of Rolluda Architects.   Rolluda emotionally remembered that his father was one of those cannery workers who regularly contributed part of his paycheck to buy the first Filipino community center back in the 1930s.

Rolluda incorporated different aspects of Filipino architecture into his design of the Village, including a plaza connecting the Village with the Filipino Community Center, and the Filipino flag with its eight rays representing the Filipino provinces that rose up against Spanish colonization.  Art work inside and outside the Village, will also reflect Filipino culture and history.

Project creators and donors to the Village are particularly proud of the model with its safe, intergenerational concept and the co-housing of both senior housing and the Innovation Learning Center, which aims to bring young people and professionals to the Village to share and learn science, technology, engineering, arts, and math.

Veloria reminding those in attendance that there was still a need to raise $1.5 million for the completion of the Innovation Learning Center.  Completion of the Village is expected in late 2021.