‘The Steep Price of Freedom’: WWII in PH conference, Sept. 28

SAN FRANCISCO — The fifth annual Conference on World War II in the Philippines will be held on Saturday, Sept. 28, from 9:30 a.m. to 4 p.m. at Fromm Hall Conference Center at the University of San Francisco.

The conference is being co-hosted by Bataan Legacy Historical Society (BLHS), the Yuchengco Philippine Studies Program of the University of San Francisco, Memorare Manila 1945 and USF Kasamahan, 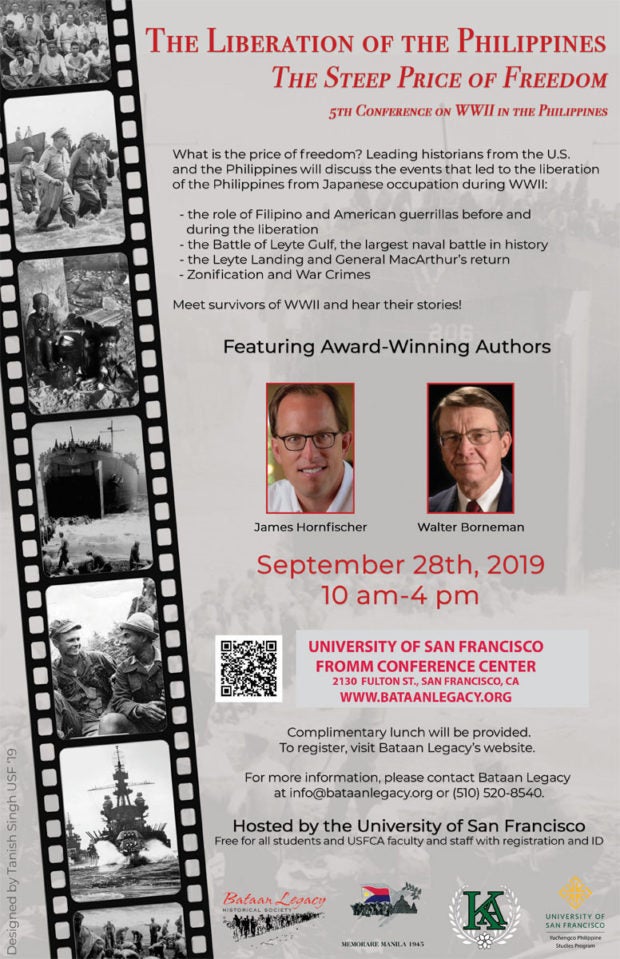 To mark the 75th Anniversary of the Battle of Leyte Gulf, the largest naval battle in history, this year’s theme is “The Liberation of the Philippines – The Steep Price of Freedom.” Admission is free for all students, military, veterans, Grade 11 history teachers and USF faculty.  Regular admission is $25 and includes a box lunch and parking.  Registration is required through www.bataanlegacy.org.

The conference will feature speakers from the Philippines and the United States.  Topics will include the Role of Filipino and American Guerrillas before and during the Liberation with Prof. Bernard Karganilla of the Univ. of the Philippines and Richard Foye, Aauthor of Foye and the Filipino Guerrillas; the Leyte Landing with Walter Borneman, author of MacArthur at War and The Admirals; the Battle of Leyte Gulf with Prof. Jose Custodio and James Hornfischer, author of the Last Stand of the Tin Can Soldiers; Zonification and War Crimes with Prof. Mark Hull of the U.S. Army Command and General Staff College and Cecilia Gaerlan of Bataan Legacy Historical Society.

The keynote speaker will be Admiral William Fallon, USN (Ret.), the current Chair of the Naval Historical Foundation and former Commander of the U.S. Pacific and U.S. Central Commands.  Maj. General Antonio Taguba, USA (Ret.) will speak about the Filipino Veterans Recognition and Education Project during the lunch hour.  Maj. General Eldon Regua, USA (Ret.), this year’s Conference Chair, will act as the Master of Ceremonies.

The conference is supported by grants from Ambassador and Mrs. Howard Leach (In Memory of the 40th Tank Battalion of Salinas, California, which made up Co. C of the 194th Tank Battalion in the Philippines); the Joseph and Mercedes McMicking Foundation, Mrs. Consuelo Hall McHugh (In Memory of the 100,000 Civilians killed during the Battle of Manila from February 2 to March 4, 1945); Wells Fargo and Philippine Airlines.