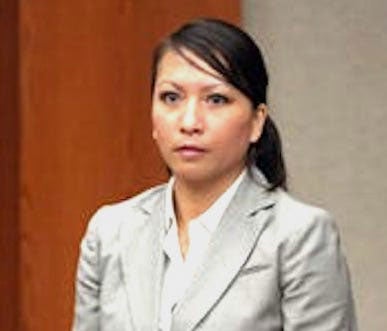 WOODBRIDGE, New Jersey – A Filipina American Superior Court judge in Middlesex County has sued the township and several police officers for allegedly retaliating and discriminating against her in a malicious conspiracy.

In the lawsuit filed in federal court, Carlia Brady claims that her case is “one of the most egregious abuses of police powers, retaliation, racism, and gender bias to be perpetuated upon an innocent law-abiding citizen.” Brady is the first Philippine-born Superior Court judge in New Jersey.

The lawsuit named as defendants Woodbridge Township, Police Director Robert Hubner, Lt. Brian Murphy, Detective Sean Grogan, Sgt. Walter Bukowski, Lt. James Mullarney and Officer Robert Bartko. Brady, a civil court judge, was accused of harboring at her Woodbridge home her then-boyfriend, Jason Prontnicki, who was wanted in connection with an armed robbery at an Old Bridge pharmacy in 2013, according to a MyCentralJersey.com report.

Woodbridge police charged her for failing to turn Prontnicki over to authorities even though she allegedly knew he was wanted in the April 29, 2013 robbery of the Woods Pharmacy. Prontnicki, who is serving a 10-year sentence at South Woods State Prison, is appealing his conviction. He will not be eligible for parole until 2022.

Brady was charged in June 2013, three months after being confirmed as a Superior Court judge. She was suspended after her arrest, but Somerset County Superior Court dismissed the charges, and she was reinstated as judge in March 2018. She is awaiting a decision on ethics charges filed against her.

Brady says her troubles began when Prontnicki borrowed her Honda Civic on June 9, 2013 telling her he was lending it to his brother, but he actually lent it to a friend in Jersey City, who reportedly refused to return the car. Brady says she broke off her relationship with Prontnicki that same day and asked him to move out of her home, according to MyCentralJersey.com.

She said she increasingly feared her car would be used in a crime or that the garage opener could be used to gain unauthorized entry to her home. Brady went to the Woodbridge Police Department around 10 a.m. June 10, 2013 seeking help in finding her missing car.

Brady claims she was not aware that Prontnicki had been on probation for using a false prescription to obtain Oxycodone in February 2013, that he was addicted to painkillers, and had outstanding warrants for second-degree armed robbery and unlawful possession of a weapon.

After learning of the warrants, Brady says she offered the police the keys to her home to do a search and asked to stay at headquarters until Prontnicki was arrested. The police officers refused,  according to the lawsuit.

Despite confirming that it was Prontnicki in the passenger seat, the officers did not arrest Prontnicki. “They sat and watched an alleged armed and dangerous fugitive enter (using her missing garage door opener) the home of an unarmed and defenseless woman they knew had just broken up with him,” according to the lawsuit. Murphy and Grogan watched as Prontnicki left Brady’s home; he was arrested by Woodbridge police officers two blocks away.

Brady says she had “no idea” that “she would lose her career and everything that she had worked so hard to achieve.” She said she was scorned by friends and colleagues and was forced to move in with her parents. She is seeking an award for punitive damages, attorney’s fees and a ruling that the defendants violated her Constitutional rights.