Ex-NFL Doctor Arrested in Georgia with Opioids and Steroids 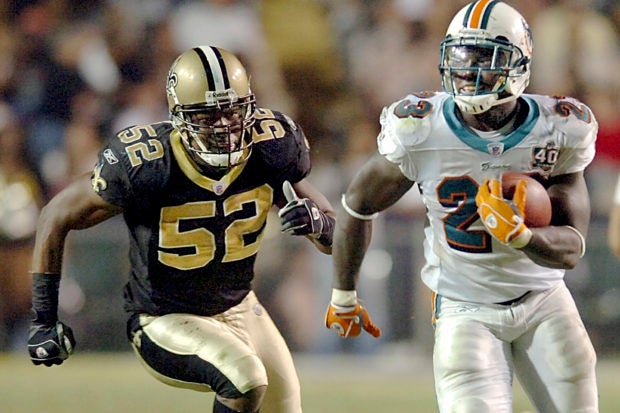 Hanson lives in the Atlanta suburb of Brookhaven and operated a weight loss clinic in nearby Sandy Springs.
He issued “numerous illegitimate prescriptions for drugs, including powerful opioid painkillers,” U.S. Attorney Byung J. Pak said in a statement Wednesday.

“While Hanson prescribed these drugs without a legitimate medical purpose, Sedrick Hodge and other associates allegedly sold these drugs in communities like Cartersville,” Pak said.

The doctor accepted only cash or checks for the drugs, and Hodge then sold them on the street for cash, prosecutors wrote in the indictment.
The drugs included oxycodone, hydrocodone, alprazolam, and others, prosecutors said.

Lawyers for Hodge didn’t immediately respond Wednesday to calls and emails requesting comment.
It wasn’t known whether the others have lawyers yet.

Hodge, a linebacker who played at the University of North Carolina, was drafted by the Saints in 2001.
He spent all five of his NFL seasons in New Orleans, appearing in 63 games and starting 43.
He signed with Miami as a free agent in 2006 but was cut before the regular season began.

This case is part of the U.S. Attorney’s Office’s Operation SCOPE, an acronym for Strategically Combatting Opioids through Prosecution and Enforcement, according to prosecutors.
It is aimed at fighting the nation’s opioid crisis by cracking down on physicians and dealers.

The opioid crisis is the “deadliest drug epidemic in American history,” the U.S. Department of Justice said in its recent budget request.
President Donald Trump has declared it a National Public Health Emergency.

Opioid overdoses claimed the lives of about 400,000 Americans from 1999-2017, according to the Centers for Disease Control and Prevention.