Fil-Am tennis player, 11, has his eyes on the prize

Fil-Am tennis player, 11, has his eyes on the prize NEW YORK — Luck may have played a role in his selection as one of the faces of the United States Tennis Association’s (USTA) new youth brand called “Net Generation,” which aims to inspire the next generation of tennis players. But 11-year-old Andre Alcantara of Las Vegas, Nevada, has a much bigger dream than being an influencer — he wants to play in the big league someday, at the Arthur Ashe Court of the National Tennis Center in Flushing, New York.

Andre was one of the few chosen among hundreds of applicants as a next-generation influencer at the US Open. He was also selected as a “reporter” or Kidcaster.

A budding tennis player himself, his role was to promote the Net Generation and influence the youth between the ages 5-18 to get into the sport. As a Kidscaster, he was given a couple of segments interviewing tennis players and celebrities like Blanco Brown, an American singer, songwriter and record producer who has produced for Chris Brown and Pitbull. He also had the opportunity to meet up with Naomi Osaka, the defending US Open champion, and Roger Federer, two of his favorite players, as well asbasketball icon Kobe Bryant, who was promoting new book Legacy and the Queen. 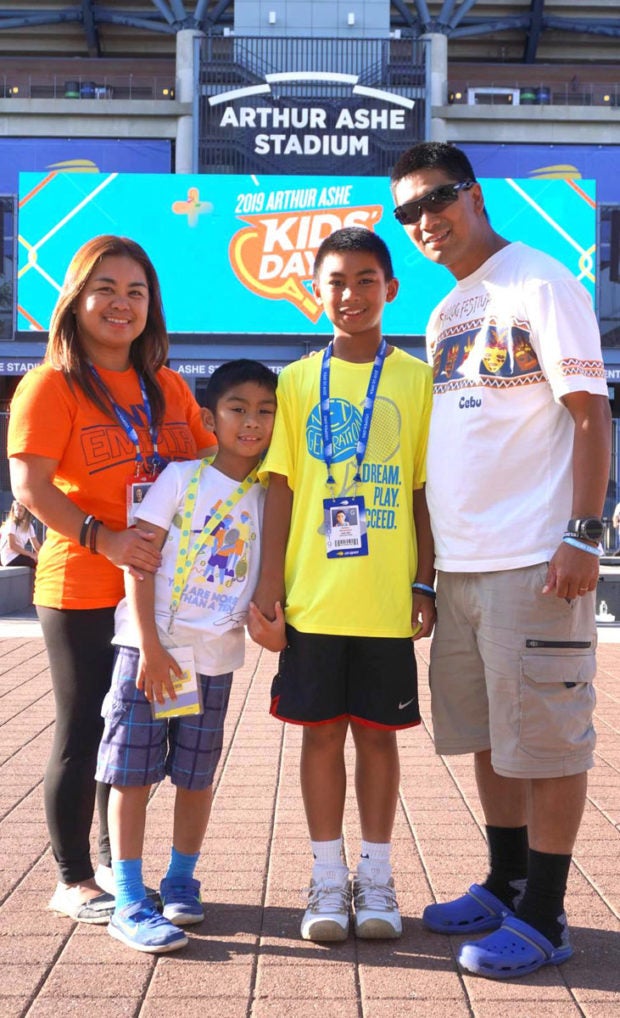 Andre Alcantara with his family at the US Open in Flushing, NY (left to right): Ana, mother; Ashton, younger brother; Andre, and Eric, father. TROI SANTOS

Andre said their segments were either scripted or impromptu interviews. The Kidcasters had to inform the public of what matches were coming up for the day and the food available at the tennis center. Two of the Kidcasters paired alternately with him for four days were from Puerto Rico and Arizona, also young tennis players.

As his visit to New York and the US Open was his first, Andrew was excited. He kept on talking about it every day after receiving a congratulatory letter, said his mother Ana, a nurse. The family attends the annual BNP Paribas Open at the Indian Wells Tennis Garden in Palm Springs, California, which is another venue for professional tennis players from around the world to compete.

Prior to the US Open, Andrew volunteered as a “ball kid” at the World Team Tennis (WTT) in Las Vegas. WTT is a mixed-gender professional tennis league founded by Billy Jean King in 1973. The league’s season normally takes place in the summer months. Players from the ATP and WTA take a break from their tour schedules to attend.

Andre began his journey at age 7, when he competed for the first time and finished in 4th place. He won his first national tournament on Boys 12 Doubles at the age of 10 and is currently competing in the local, sectional, and national levels. He was ranked #1 on two divisions in Boys 10 and Boys 12 in 2018. 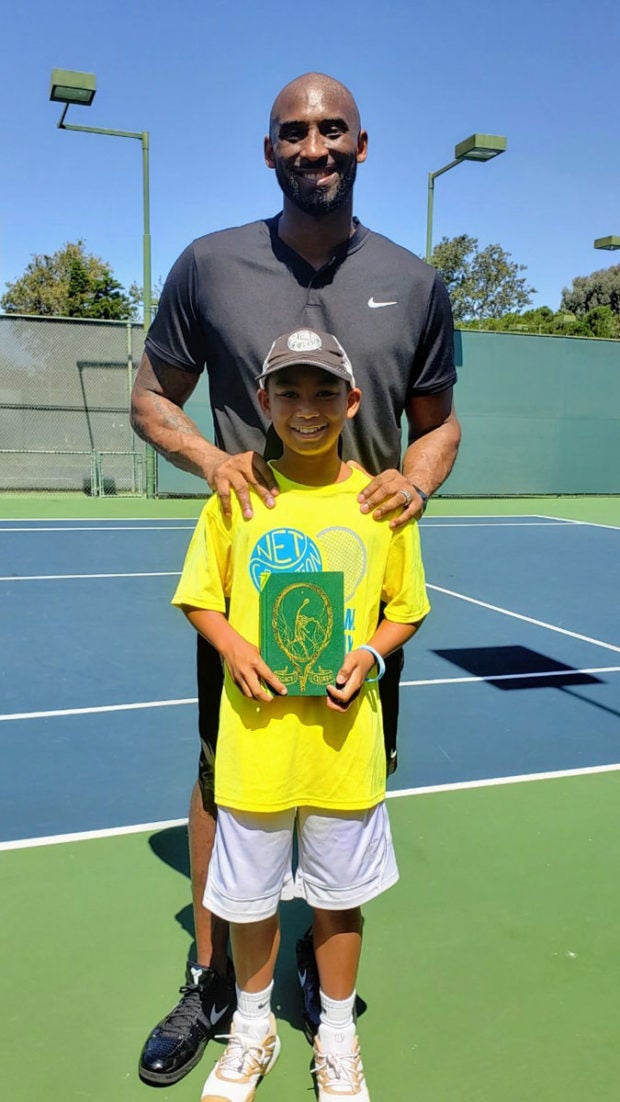 Andre with Kobe Bryant at a practice court at the US Open.  ANA ALCANTARA

Although he is right-handed in everything that he does, he plays with his left hand at tennis. “I taught him that when he was younger. Very few tennis players are lefties and I think, this gives Andre an advantage,” his father, Eric, said.

Eric, who was a former varsity tennis player with the University of the East, introduced him to tennis at age 3. He was invited to attend the No Quit Tennis Academy to be trained at age 5. At a very young age, Andre wanted to be a pilot, but as he progressed and improved his tennis skills, he now aspires to be a professional tennis player.  He believes that as he keeps on winning, he would be getting more trophies and endorsements which would lead him to achieving his dream.

Andre gets regular training from his dad and trains at the No Quit Tennis Academy where his dad works as one of the coaches. In addition, he also goes to Viatality Health & Wellness in Las Vegas for training, conditioning and recovering sessions under Fil-Am coach Dax Timbol. The facility specializes to athletes competing in triathlons.

Andre’s parents see his talent and passion for the game. “For the past two years, Andre was in homeschool,” mom Ana said. “We thought that our time for Andre’s tennis schedules and studies will be more balanced and flexible with him being homeschooled.” 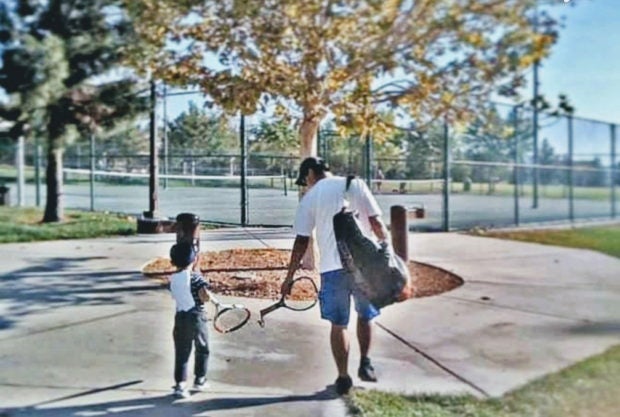 Andre at age 5 with dad Eric after a practice session.  ANA ALCANTARA

“We are confident of his potential and we will continue supporting him for as long as he loves playing,” said Eric.

“Even if we are both working full-time, we manage our time together to allow Andre pursue his passion,” his mother said. “With his dad as his coach and me, as his teacher… it’s tough.”  Ana lived in Manhattan when she first came to the U.S .and moved to Los Angeles 14 years ago to be with husband Eric. They both grew up in Quezon City.

“I was looking forward to revisit New York with the family,” Ana told the Philippine Daily Mirror. “Andre was just as excited as we were. In fact, he had his possible itinerary when he was done with his kidcasting duties,” added Ana.

Andre was recently recognized as one of the top performers in state of Nevada, in the local, sectional and national levels. He is a scholar-athlete of the Inspiring Children Foundation whose goal is to get kids out of the streets through mentoring, tennis and education. According to Ana, the foundation helps with Andre’s tournament registration fees and trainings through USTA Foundation.

Andre Alcantara poses outside the Arthur Ashe Stadium during a break from his “kidcasting” duties. TROI SANTOS

Last April, Andre signed a sponsorship agreement with Wilson Sporting Goods, manufacturer of sporting goods and sportswear. They provide equipment for various teams including golf balls and equipment, soccer, tennis, basketball and American football. “Wilson provide all of Andre’s needs for tennis,” said Eric. “They saw Andre’s achievements and I’m grateful that Andre is now on board with them.”

This year, Andre was invited to train at the USTA Regional Training Center in Carson, CA for the TEAM USA Tennis. Only 6 boys and 6 girls, 12 and under were chosen among other junior players in their age level.

With more experience and exposure, it may not be a long journey for Andre to reach his destination like Cori “Coco” Gauff has accomplished.  She was the runner-up in the girls’ single event at the 2017 US Open making her the youngest finalist at the event in the tournament’s history.

This USTA Tennis Center, site of a Grand Slam Tournament in Flushing, New York had its doors opened for him to step in the future. Meeting tennis pros inspired him more and it is just the beginning. Maybe, he would be the first Fil-Am tennis champion.  Meantime, he is content at chasing his goal.