How Trump can screw up Hong Kong 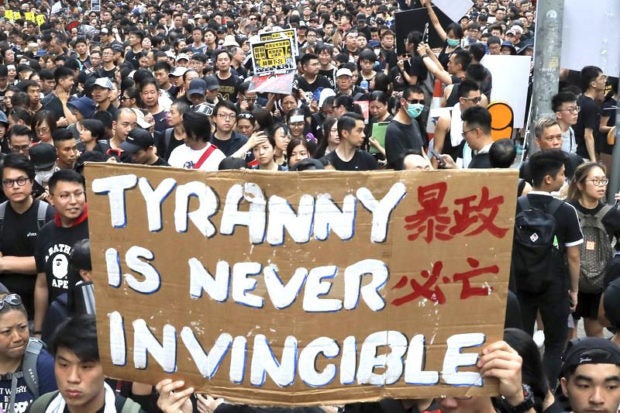 It’s a good thing Donald Trump has a real hurricane, a Sharpie, and a fake map to play with.

Yes, the man is no cartographer like Amerigo Vespucci (now there’s a guy with a brand! He put the “A” in USA).

But at least the president has something other than golf to occupy his divine passion for lying.

If he didn’t, he might have to start paying attention to what’s happening in Hong Kong, like all the rest of us.

Hong Kong is a mixed blessing for Filipinos. It is the modern diaspora. And that comes with both good and bad.

But what’s good for Hong Kongers is essentially good for Filipinos who must go there to live and work. For American Filipinos, we have relatives who are caught in all this. And as Americans, well, as you can see the U.S. has some power to intervene if it chooses. But it must be done delicately.

As the president was golfing and awaiting the hurricane over the Labor Day weekend, Hong Kong finally rose up in the headlines, but only after clashes between police and protestors grew more violent.

It was a brief window when Trump wasn’t sucking up all the news space. What else was there? People could finally see beyond a few seconds on the news what was going on in Hong Kong.

ICYMI, here’s a tally from the South China Morning Post on the numbers around the protest since June 9:

And all because people in Hong Kong want the freedoms they’ve enjoyed for years under the twin-mottos: “One country, two systems” and “Hong Kong people rule Hong Kong.”

They’re not empty sayings when people are willing to put their bodies on the line.

The increased violence made Hong Kong leader Carrie Lam finally give in on Wednesday to one of the demands of protestors—the withdrawal of a proposed extradition treaty that Beijing wants so desperately.

It’s the one thing that set off the people’s uprising this summer. Even House Speaker Nancy Pelosi cautioned that if it passed, the treaty would “legitimize and legalize” the kidnapping of executives and dissidents.

But don’t think the bill’s withdrawal ends the whole ordeal. A summer of protests allowed for more demands to fester. Lam’s “too little, too late” move this week was characterized by critics as a “band-aid on rotting flesh.”

Things are getting serious in Hong Kong. Because the key point among protestors’ demands is the desire for universal suffrage, the right to vote.

Aside from free speech and the right to assemble and protest, they want their voices to count.

Filipinos should understand this instinctively.

It’s a version of “People Power.” Remember that?

How far will it go?

Two days before Lam’s announcement, I got a sense of the feelings of Hong Kongers when I attended the Taiwanfest in Vancouver, BC.

If you ever want to take a break from America, I suggest you go to Canada for a visit. They don’t give you health care upon entry. But you’ll see what all the fuss is “aboot,” especially in Vancouver.

I am a San Francisco chauvinist, but I bow to the natural beauty of Vancouver, set like a jewel in a ring of mountainous ancient forests and waterways. Talk to the people and the Canadian accent is just as likely to be Chinese, Korean, Filipino, Indian, or Pakistani.

Canada’s diversity is astonishing. And on top of it, there’s a sense of respect for the original hosts of the land, the indigenous, or at least there was in Vancouver.

It seemed to be more the American ideal than America.

One of the storytellers was a performer named Harmony, 27.

Dressed in black with a corresponding mask, she told the story of a Hong Kong friend, 22, whom she did not identify. The friend’s story is one of struggle and courage. Despite protests from her parents to be safe and prudent, the friend defies them and shows her love for Hong Kong and her freedom by joining the protestors for a tenth time.

Afterwards, I talked to Harmony, who had changed out of her black protest garb into a yellow dress. The art of storytelling had emboldened her to tell her truth. But I had a few questions too. She confirmed her friend was not giving up amid the growing violence of the protests. She says young people especially are concerned about the future. She talks about the lack of housing, jobs, and opportunity. At some point, as in the story she told on stage, Harmony and the friend are one.

I ask her if it seems inevitable that there will be a crackdown by Beijing.

She says it does, but that won’t stop her.

It seems hopeless, suicidal, I say.

Without hesitation she answered: “We are prepared to die.”

So, while many of us in these United States idly watch our freedoms erode like a melting ice sheet, there is a core group of Hong Kongers who desperately want to be like us. Free. Democratic. And willing to die for their ideals.

And what does the leader of the free world say to that?

Offer asylum? In your dreams.

But who knows what Trump would do if he knew he actually had the power to create a whole new mess to distract the world?

A truly Trumpian move could be to change the U.S-Hong Kong Policy Act of 1992 (which gives Hong Kong special status for things like U.S. technology with dual consumer and military use). In other words, he could start treating Hong Kong like any other city on the mainland.

Can he do that? He’s done worse.

If Trump could mis-map Alabama, it’s likely he thinks HK, Shanghai, Beijing, are all the same.

Of course, they’re not. It’s not seen one, seen them all.

And that in part helps explain why Hong Kongers are so zealously protesting to protect the unique city that they love.

By messing with the 1992 law by executive order, Trump could wreak all sorts of havoc– as is his diplomatic specialty—sending mixed messages throughout the world.

A sop to Beijing, a stab in the heart of Hong Kong, all while slapping tariffs to the entire country like his own personal sales tax.

Emil Guillermo is an award-winning journalist and commentator. He writes a column for the Inquirer’s North American Bureau. Twitter @emilamok. Catch him wherever you listen to podcasts.