China’s aid is a Trojan horse 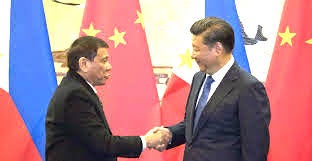 NEW YORK—There is no such thing as a free lunch.

President Duterte decries aid from the European Union that he says would be premised on the EU assuming it would have the right to interfere with the Philippines’ sovereignty. Once again, he sounds nationalist notes and comes across as the country’s stoutest defender—big man unafraid to stand up to the West and its overbearing ways.

But what’s wrong with this picture?

There is his bromance with China’s Xi Jinping, one that carries the promise of a lot more aid. When he informed Jinping that the Philippines would drill for oil in one of the islands well within its economic zone—in all likelihood, Recto Bank—the Chinese president responded by warning Duterte that there could be war.

Did the tough-talking, macho leader of the nation stand up to him? Not at all.

At the same time, his administration touts the $1 billion aid package promised by China at the recently concluded Beijing-sponsored “Belt and Road Summit.” Yet the potential revenue from the tremendous mineral deposits in Recto Bank would render a billion dollars small change. As would that from Benham Rise, off Luzon’s Pacific-facing coast and thus not in the West Philippine Sea, and in which Chinese ships were spotted not too long ago making exploratory runs.

And the president’s reaction? He basically shrugged.

It’s no coincidence then that the president has soft-pedaled the People’s Republic of China’s baseless claim to and aggressive island building in the West Philippine Sea. Duterte keeps giving ground (and water), literally and figuratively.

And yet, as many others and I have pointed out, as a candidate Duterte pledged last year to go to one of the disputed islands, on a jet ski no less, and plant the Philippine flag there.

This just reinforces my contention, raised in a previous column, that in the world of bullies, a hierarchy obtains. Right now, in Asia, top dog, or top don, whatever term one chooses to use, is China. President Duterte has willingly played the part of subaltern, along with the Association of Southeast Asian Nations: both have proven to have no teeth at all when it comes to Chinese interference and bullying.

So how can Duterte reconcile his stance against aid from the EU that he describes comes with strings attached, with accepting aid from China? Does he really believe the PRC is doing this out of the goodness of its heart, motivated by sheer altruism? That at some point China won’t use its aid to influence policies in the Philippines that could be detrimental to its own interests?

Supreme Court Associate Justice Antonio Carpio, who has been in the forefront of the legal tussle regarding China’s colossal sea grab, pointed out the obvious, that the president of the Philippines has a “constitutional duty” to employ all legal means under international law to safeguard the country’s territory.

For Duterte to simply fold due to a verbal warning is inexcusable. His passivity—strange to behold in a man so enamored of action—endangers the integrity of the nation’s territory. Justice Carpio remarked that “acquiescence means the Philippines will lose forever its EEZ [Exclusive Economic Zone] in the West Philippine Sea to China.” It is a warning echoed by scholars and legal experts who have studied this matter.

The Philippines’ accommodation of the Chinese weakens its negotiating stance with regard to the contested waters. In the photos of Jinping and Duterte, the Chinese leader’s smile is that of the cat about to devour the canary. How can a supposedly savvy lawyer now president believe that aid from China won’t come at a cost?

Is this what he believes is an independent foreign policy, that simply because China doesn’t object to his vicious anti-poor campaign, which the drug war really is, that therefore all is sweetness and light?

China has bigger fish to fry. Besides, our neighbor to the north is itself a notorious violator of human rights. It couldn’t care less.

Could it be that Duterte’s harsh dismissal of critics of his government’s human-rights record is simply a case of aping the biggest bully on the block?