USA Basketball coach Gregg Popovich doesn’t have many rules for his World Cup team. They’re more like suggestions, such as the one about limiting phone usage when the team is having breakfast together.

He doesn’t mind if guys are talking.

He just wants them talking to one another.

Part of the challenge the U.S. faces in the road to this FIBA World Cup the tournament opener for the Americans in Shanghai against the Czech Republic is just a little over two weeks away is taking individuals who know one another and turning them into a real team.

It’s been a top priority for Popovich since the national team assembled for camp last week, and players say they feel bonds being forged.

The bus rides, the breakfast meetings when there are no phones, just getting to know each other to see what they’re all about, see how they are, just get to know them.”

So off-court matters are coming together.

The on-court product is still a work in progress.

The World Cup candidates played a team of mostly G League players in practice scrimmages on Wednesday and struggled mightily, losing one of those short games 36-17.

The first real dress rehearsal for the Americans in advance of the tournament comes Friday night in Anaheim against Spain. 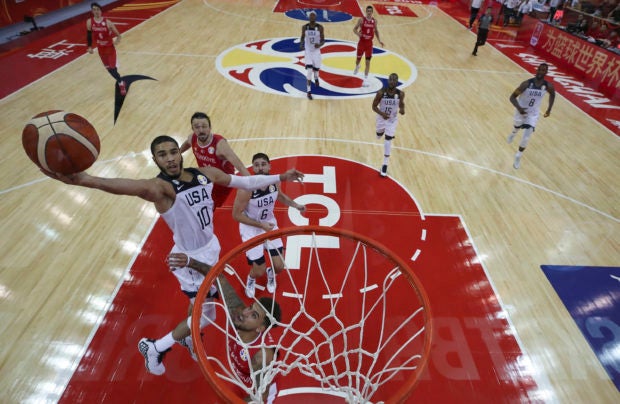 Jayson Tatum of USA drives during the 1st round Group E match between USA and Turkey of 2019 FIBA World Cup at the Oriental Sports Center on Tuesday, Sept. 3, 2019, in Shanghai, China. (Lintao Zhang/Pool via AP)

Results in practice shouldn’t be read into that much, and for what it’s worth Popovich wasn’t exactly putting his team on blast afterward.

“Every day’s an opportunity to work on execution and put a year’s worth of business into a couple of weeks,” Popovich said. “Every day’s a little bit better.”

Brooklyn’s Joe Harris said facing adversity in camp will only help the Americans when adversity strikes for real when games count in China.

“This is where you figure it out,” Harris said. “You don’t want everything to be seamless right now.

These are the moments right now in practice where you want it to be difficult, take your licks a little bit, and figure it out.

It’s making us come together. You can’t do it alone and this is helping us become a collective unit.”

The team had the weekend off after an intrasquad scrimmage in Las Vegas last Friday, then reassembled at the Los Angeles Lakers’ practice facility on Tuesday.

If the Americans â€” the two-time defending World Cup champions â€” make the gold medal game in Beijing on Sept. 15, that means Tuesday was the start of 34 consecutive days together for a group currently composed of 15 players from 10 different NBA franchises. The roster will be pared to 12 before the World Cup begins.

A lot of players knew each other relatively well before last week, but Popovich wants them to get very close very fast.

“I agree with Pop,” Boston’s Kemba Walker said. “Cell phones, you don’t need them, not all the time. There’s definitely time to be on your cell phones but now, right now, in the situation that we’re in we have to gain some camaraderie pretty fast.”

Warriors Star Kevin Durant out for Rest of West Semifinals

For his part, Walker thinks that camaraderie is building.