A delegation of the Seattle APALA chapter, whose members unanimously co-sponsored with the San Diego chapter a resolution calling for active solidarity with the labor movement in the Philippines. CONTRIBUTED

OAKLAND, California – Asian American labor leaders, organizers and supporters condemned Philippine President Duterte’s war on drugs that has resulted in the “continued increase in victims of extrajudicial killings” and unwillingness to stop the exploitative “contractualization” of employees. 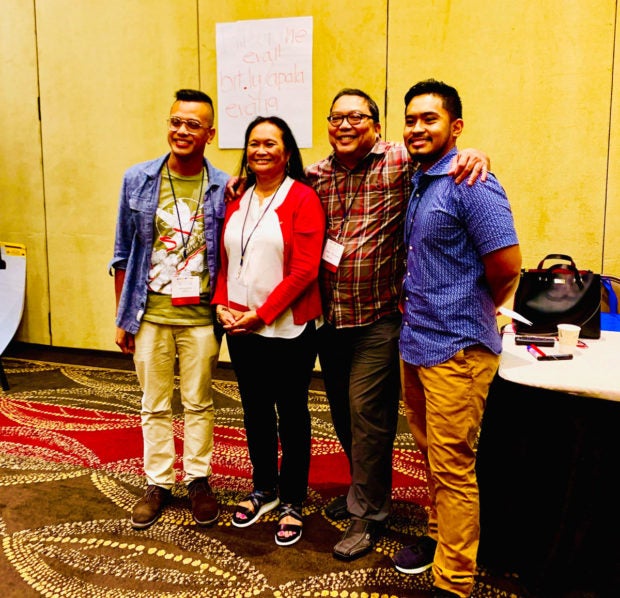 Panelists on the labor situation in the Philippines, from left to right, Adrian Bonifacio of Anakbayan, Cindy Domingo and Edwin Batongbacal of Friends of Akbayan USA, and Nap Pempena of Migrante USA. CONTRIBUTED

The tradition of solidarity, explained Domingo, dates to the 1930s when Filipino labor leaders (who were organizing agricultural and Alaska cannery workers on the West Coast) and carried on to the ‘70s and ‘80s when FilipinoAmerican labor leaders, Silme Domingo (Cindy Domingo’s brother) and Gene Viernes, who were both reforming Local 37 in Seattle, Washington, linked their organizing among racially discriminated wage workers, to militant labor groups in the Philippines under the Marcos dictatorship.

Domingo and Viernes successfully lobbied the powerful International Longshore and Warehouse Union to investigate labor conditions in the Philippines, leading to their assassination in Seattle in 1981. A federal court later held Marcos responsible for the murders and ordered the dictator’s estate to pay millions in damages to the union leaders’ survivors.

At the APALA convention, a workshop on international workers’ solidarity moderated by Cindy Domingo, with presenters Edwin Batongbacal of Friends of Akbayan USA, Nap Pempena of Migrante USA, and Adrian Bonifacio of Anakbayan discussed exploitative working conditions, the repression of labor activists, and notably, the practice of contractualization, in which workers are never given permanent employee status so that employers can avoid legally mandated rights and benefits. President Duterte recently killed a bill that would end the practice, contrary to his election campaign promise.

The International Trade Union Confederation (ITUC) – the world’s largest trade union – named the Philippines, for the third year in a row, among the ten worst countries for workers’ rights. ITUC’s 2019 Global Rights Index reports that Philippine workers faced violent attacks and intimidation, with protests brutally repressed by police forces. It noted that 10 trade unionists were assassinated in the Philippines in 2018.

The panelists called for support for the efforts of workers and trade unionists in the Philippine to organize and fight back in the face of repression and violence.

APALA, founded in 1992, is the national organization of AAPI workers, union members, and allies, advocating for worker, immigrant, and civil rights. It is supported by the American Federation of Labor – Congress of Industrial Organizations – the federation of 55 national and international labor unions representing 12.5 million workers.