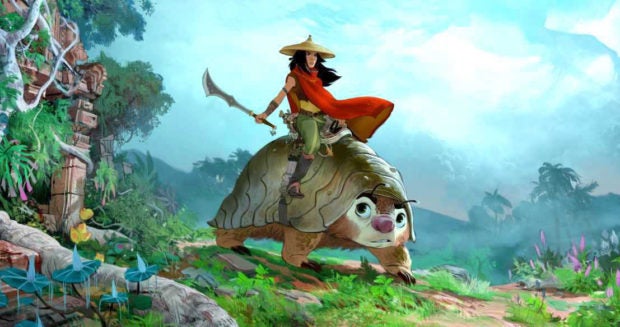 LOS ANGELES — Disney’s new animated movie “Raya and the Last Dragon” will feature Filipino Canadian actress Cassandra “Cassie” Steele as the voice of its main character, the company announced August 24 at the D23 Expo in Anaheim.

Steele will be the voice of Raya, a lone warrior in the fictional land of Kumandra, on a quest to save her land by finding the world’s last dragon. Voicing the last dragon, Sisu, is actress and rapper Awkwafina (Nora Lum).

Born in Canada to a British father and Filipina mother, Steele gained much success after first being seen on a commercial for the electronic board game, Fib Finder, in 2001.

That same year, the now 29-year-old appeared in an episode of Canadian television series, “Relic Hunter,” before becoming a regular cast member on the hit Canadian show “Degrassi: The Next Generation” where she played the character of Manny Santos.

Other roles include the character of Abby Vargas in the Canadian television series “The L.A. Complex,” that was picked by the CW before being cancelled in 2012; Valerie Vont in the Lifetime film “Sorority Surrogate;” and characters Tammy Gueterman and Tricia in the American adult cartoon series “Rick and Morty” among others.

Also a singer, Steele has released a number of her own EPs and albums, some of which had songs featured in the Degrassi television films. Following the announcement of “Raya and the Last Dragon,” Steele posted a screenshot of the press release on Instagram with the caption, “So excited to finally share this!!!”

She added that she was “so grateful to be working alongside the incredibly talented and hilarious” “Crazy Rich Asians” actress Awkwafina.

“Raya and the Last Dragon” takes place in the lush fictional land of Kumandra — a “reimagined earth inhabited by an ancient civilization that venerated the mythical dragons for their power and their wisdom.”

In Kumandra, the Land of the Dragon is formed by five distinct clans, but dragons have disappeared due a dark sinister force. In comes Raya to find the last dragon who she believes has the power to save Kumandra.

“Raya is ready to meet a magical water being who breathes fog through her nose, flies by riding the raindrops, and has a gem that channels this amazing huge power,” Steele said on the D23 Expo stage.

The catch though is that, “When Raya first meets [Sisu], she’s in human form and needs Raya’s help to reclaim her power to become her true dragon self.”

In an industry that calls for more diversity and representation, the film has already been praised for bringing to the big screen characters and landscapes familiar to Southeast Asia.

One Twitter user @idkaila expressed crying during the Raya and the Last Dragon announcement and tweeted, “I was just so excited to have asian representation and turns out the voice actress cassie steele is filipino!!!”

The film’s producer Osnat Shurer, who also made the Disney animation “Moana,” said that “Raya and the Last Dragon” was “inspired by Southeast Asia, both in its themes of community and hope, and in its design.”

Part of that process was getting Los Angeles-based, Malaysian-born writer, Adele Lim, as a screenwriter for the film. She was also the co-screenwriter for box-office hit, “Crazy Rich Asians.”

Working on the storyboard for “Raya and the Last Dragon” is Thai storyboard artist and story supervisor at Walt Disney Animation Studios, Fawn Veerasunthorn. Her previous films include “Frozen,” “Zootopia,” and “Moana.”

The heart of the theme, Lim said, is about “the transformative power of community and having hope even in the face of overwhelming darkness.”

Raya and the Last Dragon will be released in theaters next November 26, 2020.