Young dancers started learning their native dance and proudly show it on main stage to the delight of the crowd. INQUIRER/Jun Nucum

SAN FRANCISCO – The 26th Pistahan had to contend with the very important security considerations in the aftermath of the recent active shooter incidents in Gilroy, California, El Paso, Texas and Dayton, Ohio.

Organizers admitted that there was more anxiety and focus on event security, prompting several meetings to address public safety and emergency protocols.

Nevertheless, the annual festivity pushed through with the same enthusiasm and excitement participants expected this time of the year. 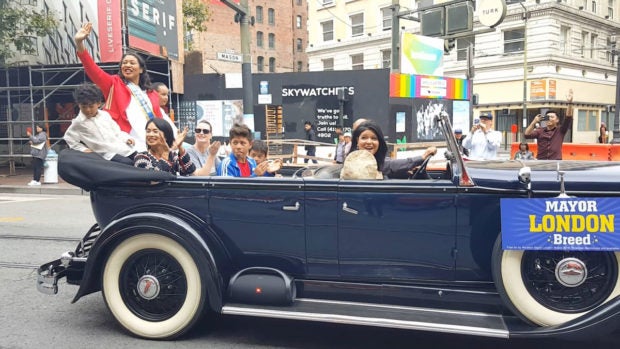 Not to be outdone were celebrities in ABS-CBN The Filipino Channel (TFC) float Morisette Amon and Billy Crawford, the biggest featured stars that wowed the TFC family Sunday afternoon entertainment at the Yerba Buena Gardens stage with their top chart Filipino and English songs

After the parade, everyone assembled at the Yerba Buena Gardens, the venue proper where nonstop entertainment numbers were performed aside from the features that booths in seven different pavilions offered. The pavilions that spread all over Yerba Buena– art, food, dance, innovation, leadership, health, and sports–catered to participants with different interests and ages.

“Being with fellow Filipinos, I feel like I am home. I kind of miss the Philippines all the time. I was born here in America but my grandmother taught me everything about Philippine culture. Watching people dance, hearing people speak in Tagalog brings me a sense of warmth.”

Unfortunately, the good vibes at the 26th Pistahan Parade and Festival at Yerba Buena Gardens in downtown San Francisco were dampened by a dismissive feature article in the San Francisco Chronicle following the celebration.

The usually jubilant Filipino American Arts and Exposition President Al Perez, key organizer of the festival, fumed about the August 10 article by the Chronicle’s Steve Rubenstein, describing the piece as “offensive, dismissive, disrespectful and insulting not only to Pistahan organizers but also to the entire Filipino American community.”

The article entitled Filipinos celebrate annual Pistahan festival in SF by Rubenstein, an SF Chronicle staff reporter since 1976, had controversial portions that included:

“The scent of fresh lumpia wafted through downtown San Francisco as thousands of Filipinos and Filipinos-for-a-day banged drums, danced, twirled sticks, threw candy, decked themselves out in colorful garb and tried, unsuccessfully, to make themselves as numerous as the folks who turned out for the Pride and St. Patrick’s Day parades…

…The Saturday parade down Market Street from Civic Center to Yerba Buena Gardens was not short of energy but it was, at times, short of eyeballs watching it. In many spots along the sidewalk, spectators stood zero deep.”

The Chronicle has since then published an updated online version two days later with an editor’s note: “Portions of this story were reworded after initial publication to more appropriately characterize the annual Pistahan festival.” 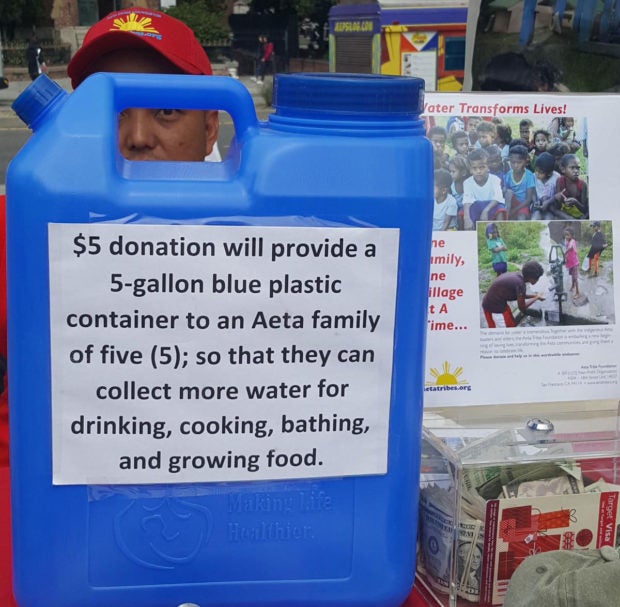 An appeal for water containers for Aeta families in Luzon in one of the booths in Pistahan. INQUIRER/Jun Nucum

Longtime Pistahan Parade director and currently Pistahan planning advisor John Espiritu branded the article as ”simply disheartening and disappointing.” “For the majority of us volunteers, success is seeing our fellow countrymen who have not been back home to the Philippines, smile and feel nostalgic of the combination of food, art and music of the motherland that this 2-day event offers,” explained Espiritu.

Echoing the sentiments of volunteers, Espiritu added that the article not only personally hurts him (but also) that the hard work that his predecessors gave and the blood, sweat and tears that his own parade team provided were simply seen as unsuccessful by a metric that is not even internally one of our determining factors of success.

Stephanie Herrera: They DO owe us an apology, and that “revision” was pointless. It still held the same ignorant and condescending tone.

Dave Guingona: Wow that article was tainted, wasn’t the point to just report on the event and celebration? It felt like he went out of his way to find bad things to say ….

Lyndon Delago: Yup, I knew the dude was shady when he interviewed me. Then what’s music had to do with Duterte and Trump!

Irene Townsend: What an unhappy human being. Bet a raincloud follows this guy. What a sad soul!

Iya Molina: This article sounded like it was written by someone bored, bitter and uninterested. Like he was given an assignment he didn’t want to do and just wrote whatever to get it over with.