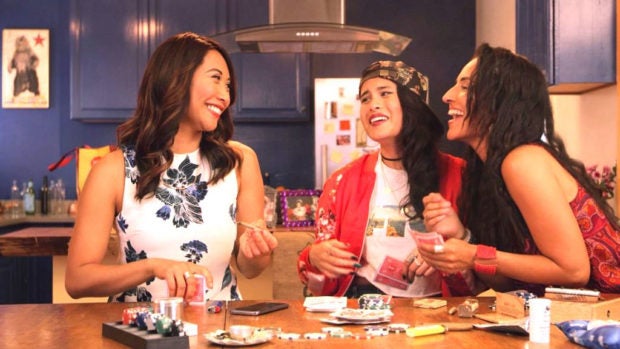 “Good Vibes”: A sisterhood based on love of cannabis. CONTRIBUTED

“I am thrilled ‘Good Vibes’ was selected to represent another facet of Asian American life,” Maxali said. “’Crazy Rich Asians’ proved to Hollywood executives that Asian American stories are worth telling, but to have a female-driven cannabis series selected in such a respected festival is a ground-breaking moment.”

“Good Vibes” follows four Bay Area cannabis female aficionados – starring Maxali together with Kristine Alyssa Gerolaga, Elena Estér, and Sarita Ocón — who are rooted in their sisterhood, their Filipino communities, and their love for cannabis.

Mentored by matriarchal Latina Mama Tee—who dispenses much-needed wisdom, woke-ness, and weed—the three lifelong friends search to find out if the 30s can genuinely be the new 20s.

In 2018, revenue from legal cannabis sales, both recreational and medical, was estimated to be between $8.6 billion and $10 billion, according to a report from MJBizDaily. Women are entering the cannabis industry at a record rate according to Entrepreneur Magazine and it is about time we see a slew of shows that encourage an upward trend of female-run businesses. “Good Vibes marries the love of cannabis with strong, female minority comedians against the backdrop of a quintessential Bay Area neighborhood – the best of all worlds and a truly unique take on this sought-after genre,” said Maxali.

Creator Maxali is a third-generation Filipino American from the S.F. Bay Area who now  lives in Queens, New York.  Her family immigrated to the U.S. in the ‘40s and ‘50s, and both her Filipino parents were born in San Francisco. In New York for seven years now, she has worked as an actor, writer and international motivational speaker, and is “very grateful for the opportunities that NYC has provided for me.”

After her father passed away eight years ago, she remembers what he used to tell her: “Follow your heart, follow your karma.  Move to New York and never stop doing your art!” She left a good-paying job with an events management company in the Bay Area and moved East.

“I always dreamed I would be a full-time creative in New York City.  Which led to me to work for a cannabis creative agency and magazine,” she said.

She began acting other people’s scripts at Bindlestiff Studio, the only Filipino American Theater in the nation. During her years as a stand-up comedian, Maxali had the honor to open for comic genius Dave Chappelle a dozen times at the San Francisco Punchline and The New Parish in Oakland, California. She then began writing, producing and performing solo shows under the tutelage of W. Kamau Bell.

Director Joslyn Rose Lyons has directed and produced a diverse range of work for more than a decade in film and television, including shows for HBO, BET, OWN, Discovery Channel and Vh1.

Her films have debuted at the HBO Urbanworld Film Festival, London Raindance, Black International Cinema Berlin, and Los Angeles International. She won Best Music Documentary for her first feature documentary film “Soundz of Spirit” (Common, Andre 3000, Cee-Lo Green) at the New York International, and her work has been recognized by The International Museum of Women and FOX Studios. © The FilAm 2019