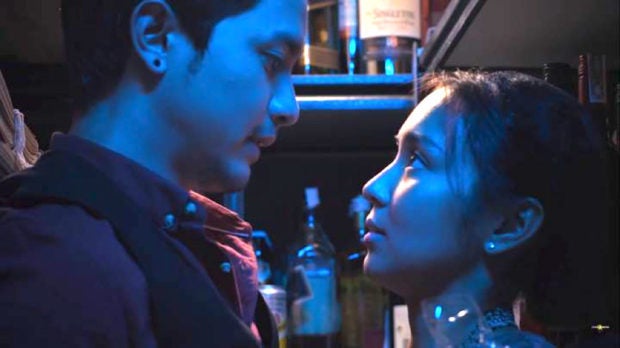 A scene from “Hello, Love Goodbye” with Alden Richards and Kathryn Bernardo. TFC

“Hello, Love Goodbye,” a Love story or socio-political commentary on the Filipino diaspora? A private U.S. screening on Monday, Aug. 5, delivered the story, set in Hong Kong, centering on the life of newly arrived OFW, Joy Fabregas who has a nursing degree in the Philippines but has taken a job as a domestic helper in Hong Kong to help support her family.

The film opens with a shot of the departures and arrivals at HK International Airport. In the background is a female voice presumably that of Joy Fabregas, the lead character, expressing the thoughts of the new arrival, describing places like Hong Kong, as just stopovers: “You arrive, stay a while, then leave.” The sentence encapsulates Joy’s mindset regarding her 2-year contract. She meets Ethan, a charismatic playboy who works as a bartender to help support his invalid father and younger brothers while waiting for his permanent residency in Hong Kong. Ethan arduously courts Joy, who resists his charms despite finding herself slowly but inevitably drawn closer to a romantic relationship with him.

Even as the screenplay establishes the romantic tension between Joy and Ethan, the movie takes the viewers into the world of the Filipino OFWs in Hong Kong, depicting their regular Sunday day-off gathering in Hong Kong Central, a park where the Filipino domestic helpers are able to connect with their kababayans, talk in Tagalog or their native dialect, prepare and share and eat Filipino food,  and generally assuage their homesickness and separation anxieties from their homeland and  families. Here, in this park, they are back home, if only for the few hours of the day. They even have their own beauty-and-talent contest and engage in commerce—buy and sell goods—something that temporary workers are expressly forbidden from doing.

Because of the backdrop of the plight of OFWs in Hong Kong, this love story rises from the trite and ordinary to something relevant and relatable to Filipinos. The choices the lovers struggle with are not the typical struggles of lovers coming from different economic strata, as in the prince and Cinderella or in countless Filipino movies (e.g., Annie Batungbakal) or from feuding families, as in Romeo and Juliet. This is the story of two lovers, each of whom must escape from the emotional chains of past mistakes (Ethan’s lost love) or promises made (the commitment of both to helping support their respective families)  or goals of self-fulfillment (Joy’s determination to be the person she believes she can be, to finally pursue her own dreams).

The lead actors—Kathryn Bernardo and Alden Richards—give what can only be described as tour de force performances, completely obliterating the lines between where their own identities end and where their movie roles begin. Kathryn and Alden are awesomely able to communicate conflicting emotions without saying anything. Kudos to the director, Cathy Garcia Molina, for recognizing the talents she was working with and getting all the cinematic mileage from them. Applause as well to the musical editor for the musical thread through each of the non-speaking sequences between Alden and Kathryn. The close ups are pure art as executed by the actors and captured by the director. This movie earned P250 million in five days in the Philippines, and for good reason.

This is a date movie if ever there’s one. As they say back home, “just feel the feeling.” Sit back, secretly dab the tears away… resistance is futile.

Included in the invitation to preview the movie was the opportunity to interview the lead actress, Kathryn Bernardo.  After watching her for one hour in her role of struggling Hong Kong domestic helper it was almost shocking to the senses to see when she walked to the front of the screening room in a simple backless lilac halter topped softly flowing gown and looking like the head-turning movie ingenue that she is; that was how convincing her performance was. 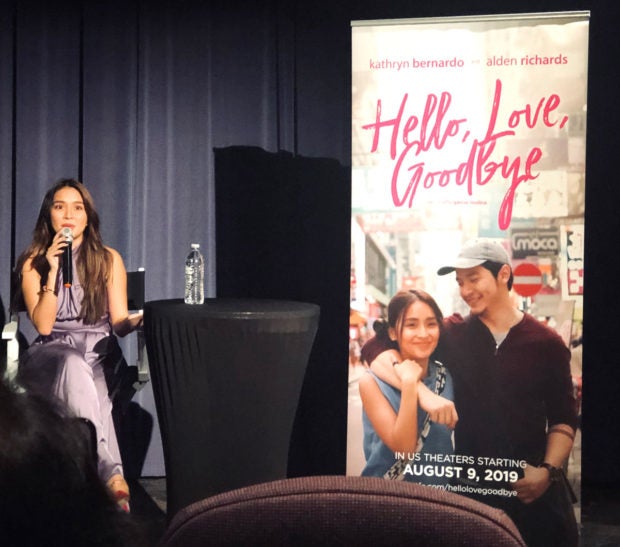 It took me a few moments to accept that this striking beauty with the girlish voice and co-ed laugh in front of me was the Joy Fabregas in the movie. That’s how amazing the transformation was.  When I asked how she prepared for her role, her reply was “Total immersion.” She mixed in among the domestic helpers that gathered regularly in the park. She did not interact with her (Kathryn’s) circle of friends for the duration of the project. In other words, she became Joy Fabregas, the domestic helper even before they started the shooting.

If one is to see only one Filipino movie this year and the next few years, this is the one. But be warned. Bring a whole packet of tissues. Even the super hunk who thinks of himself as super macho will find tears welling in his eyes at several points in the movie, if he has just the least bit of a romantic in him. And if one has ever been in love, this movie will tug at his or her heartstrings.

Kathryn Bernardo’s performance in this movie has “Best Actress” written all over it. And the producers might even think international, perhaps submitting it to international film festivals, maybe even vying for the Oscars in the foreign film category.  With this movie cementing her name as a dramatic actress, I asked her, what role she would want next if it were up to her. With only the slightest hesitation, she replied, “Action,” explaining that she wanted to expand her comfort zone and that the only way to grow is to take risks.

For US Theater Schedule visit: https://usa.mytfc.com/theaters/#scroll_Hello-Love-Goodbye