When Jackie Narkiewicz switched careers and became a librarian, she thought she’d spend her workdays “drinking hot beverages and discussing literature with people. “But during her 16 years as a librarian on New York’s Long Island.

Narkiewicz has also faced a man threatening to kill her and a patron screaming while cutting her own hair in the bathroom. For her job, Narkiewicz has been trained in CPR and mental health crisis response and carries the opioid overdose antidote naloxone with her.

As libraries nationwide contend with a surge in patrons seeking refuge in the stacks because of poverty, drug addiction or mental illness, a growing number of institutions have social workers on staff. 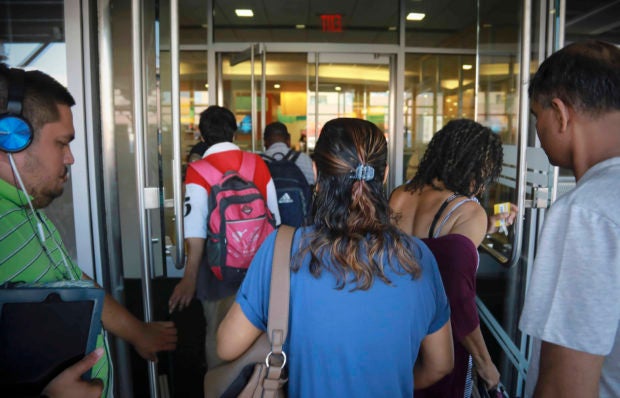 Patrons enter Queens Central Library just as doors open to start the day, Monday, July 29, 2019, in Queens borough of New York. The library has a full-time social worker assisting patrons who take refuge during the day, who may need help with various crises including, homelessness, unemployment, health. “We’re the living room for the community,” said Dennis Walcott, president, and CEO of the Queens library system. “Our doors are just open to everyone.” (AP Photo/Bebeto Matthews)

It’s the latest step in an evolution that libraries have been dealing with for years as homelessness and the opioid crisis reach emergency levels and patrons have come to rely on libraries as free, safe spaces open to all.

Though homelessness has seen some declines in the U.S. since the recession, it has surged in cities like Seattle, where a homelessness state of emergency and a spike in questions from library patrons about things like housing, transportation, and food led the public library system to hire its first full-time social worker in 2018.

Other libraries, unable to afford such a step, have trained librarians to handle certain emergencies themselves. That’s caused some debate among library workers about whether they’re being asked to adapt to an evolving job or to do work that goes too far beyond their expertise. 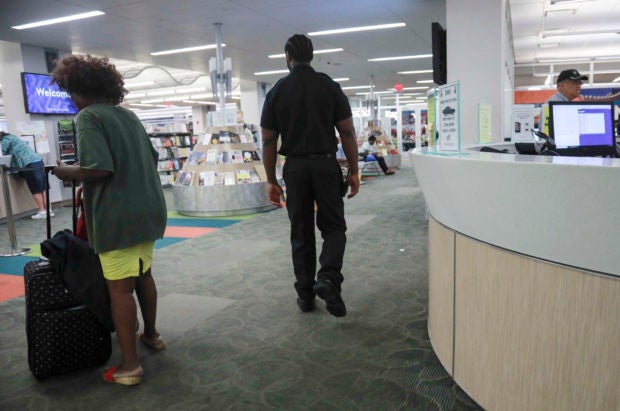 Security guard Reginald Rudolph, center, makes his rounds at Queens Central Library, Monday, July 29, 2019, in Queens borough of New York. Security personnel often become frontline contact between patrons and library social workers. “We can make good conversation with them, they get used to us, they know we’re on their side,” said Rudolph. (AP Photo/Bebeto Matthews)

“I can get you a phone number, I can get you a book you want … but when you’re dealing with mental health issues, I don’t feel appropriately trained for it,” Narkiewicz said.

A few master’s degree programs for aspiring librarians have classes on mental health, but most don’t. To help fill in the gaps, estimated 40-plus library systems have full-time social workers on staff, according to Whole Person Librarianship, an organization that tracks such partnerships. 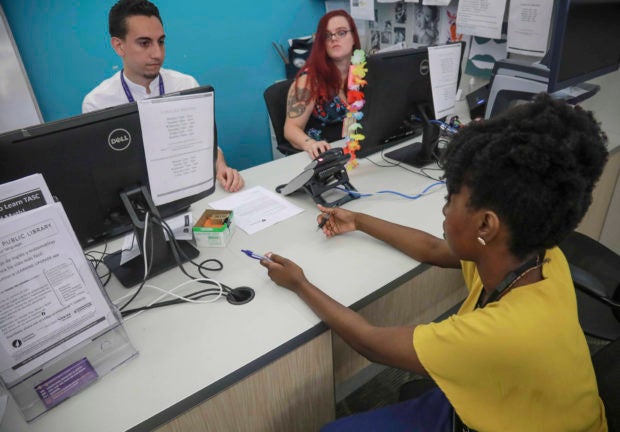 Shantel Johnson, right, a full-time social worker at Queens Central Library, and Michael Montero left, a social work summer intern from NYU, meet at the library’s coordinating desk for adult services, Monday, July 29, 2019, in Queens borough of New York. Johnson oversees a team of case managers and helps librarians connect visitors to social services. “You change with the times. I think every organization needs to do that in order to thrive,” said Johnson. (AP Photo/Bebeto Matthews)

“They’ll open up to staff, and staff is doing 14 different things,” Johnson said. She says she regularly helps patrons who are homeless, experiencing abuse or having trouble applying for jobs.

The Queens Public Library also started stationing New York University social work interns in some branches last year, as does the New York Public Library, which got its first interns two years ago.

Library patron Sofia Ciniglio was meeting twice weekly with an intern at a Manhattan branch last year for career advice.

But their conversations eventually involved her family, feelings and personal life. The intern introduced Ciniglio to a library where she could learn Braille, which she’d been curious about. 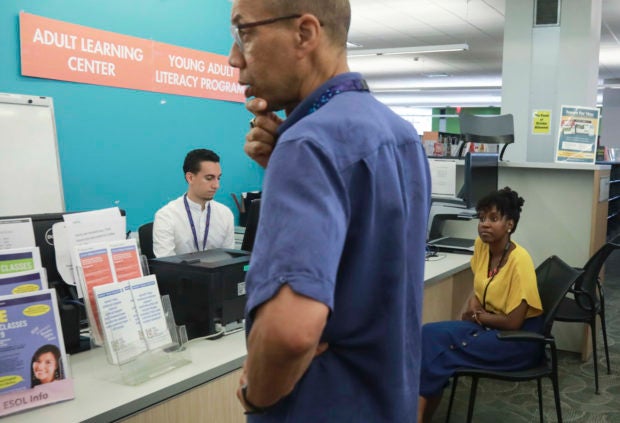 Dennis Walcott, center, president and CEO of Queens library system, Shantel Johnson, right, a full-time social worker at Queens Central Library, and Michael Montero, left, social work summer intern from NYU, meet in the coordinating section for adult services at Queens Central Libray, Monday, July 29, 2019, in Queens borough of New York. “We have a library we have to run, and we have to maintain our core services,” said Walcott, “but quite frankly, our core services have expanded.” (AP Photo/Bebeto Matthews)

“She was very much a good listener, very attentive, and she knew who I was and the nuances of how I go about things,” Ciniglio said.

The NYPL’s librarians, meanwhile, are trained to de-escalate conflicts but aren’t asked to do more in-depth mental health crisis training.

Spokeswoman Amy Geduldig notes that the library “is not a social services organization, and its staff is not medical or mental health professionals.” The NYPL, the nation’s busiest library system, still hasn’t hired a full-time licensed social worker, though Brooklyn did in 2015 and Queens did in 2018. 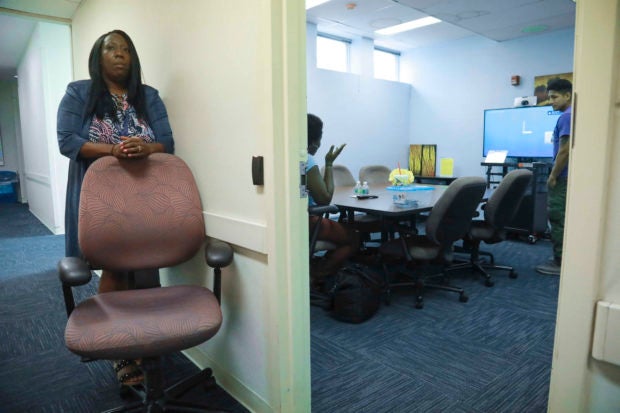 Kim McNeil-Capers, left, head of outreach programs at Queens Central Library, wait outside a room during the setup of a videoconference between an incarcerated individual and a family member, Monday, July 29, 2019, in Queens borough of New York. The video visitation program has an average of 20 families coming to the library each week. (AP Photo/Bebeto Matthews)

In some libraries without professional social work help, employees are being asked to take on new tasks.

At the San Diego Public Library, a state library grant has funded employee training in mental health first aid since 2016. Librarian Joseph Miesner says the training helped him personally when he came across a suicidal patron.

In small-town, Titusville, Pennsylvania, library director Justin Hoenke recently agreed with his library’s board that all staffers should be trained to administer naloxone if needed. 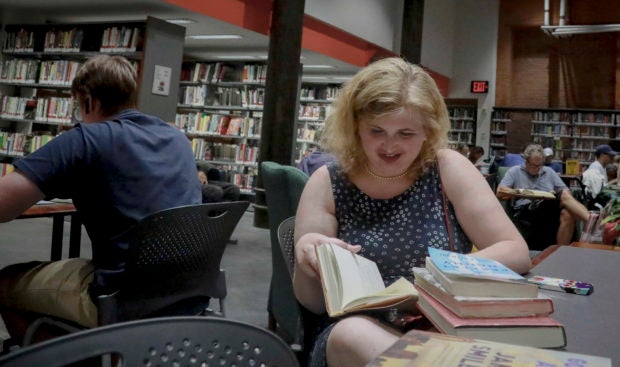 Sofia Ciniglio pulls a few of her literary favorites during a visit to Mulberry Street Library, Friday, Aug. 2, 2019, in New York. Ciniglio met twice weekly with an intern at a Manhattan branch last year for career advice, which leads to her learning Braille translation through library programs. (AP Photo/Bebeto Matthews)

“This is a new requirement of the job,” Hoenke said. “If they’re not comfortable with it, they kind of have to reevaluate their life and their job. You have to change with the times.”

Fobazi Ettarh doesn’t see it that way. An academic librarian at Rutgers University in Newark, she says too many expectations can distract librarians from their work, and she personally wouldn’t feel comfortable as a first responder to an overdose.

“It would just be a lot for my mental health,” she said. 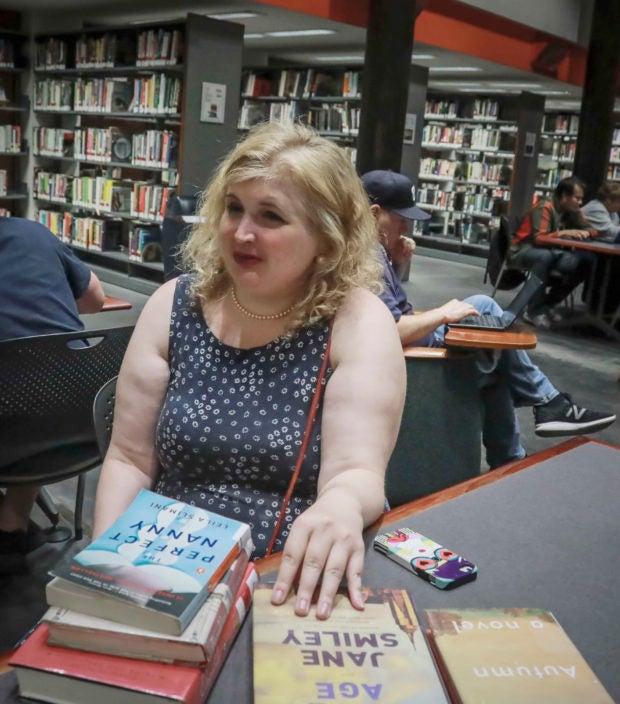 Sofia Ciniglio pulls a few of her literary favorites during a visit to Mulberry Street Library, Friday, Aug. 2, 2019, in New York. Ciniglio met twice weekly with an intern at a Manhattan branch last year for career advice, which leads to her learning Braille translation through library programs. (AP Photo/Bebeto Matthews)

Research suggests other librarians feel the same way. A 2018 survey of librarians in Pennsylvania found many reported they already felt stressed from trying to answer questions from patrons about mental health and social services, even without handling acute emergencies in the library.

Puzzling Number of Men Tied to Ferguson Protests Have Died

Meanwhile, some librarians, like Amanda Oliver, have begged in vain for more preparation. Oliver said she quit her public library job in Washington when she asked supervisors for more training and “was largely ignored.” 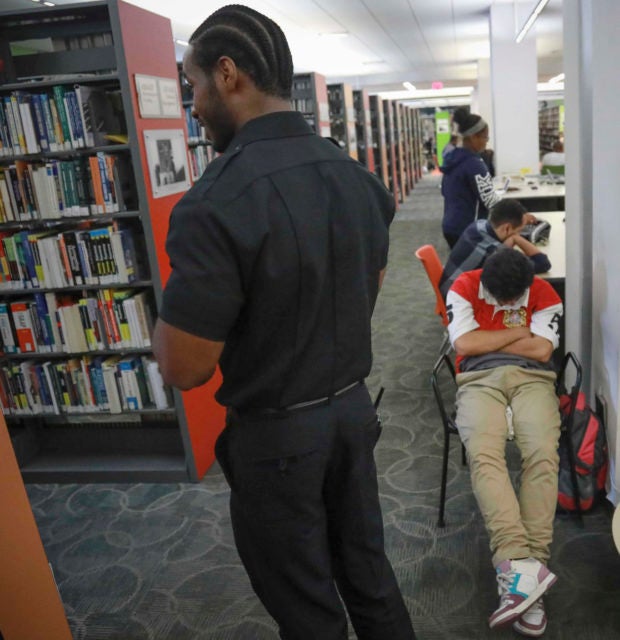 Security guard Reginald Rudolph, left, makes his rounds at Queens Central Library, Monday, July 29, 2019, in Queens borough of New York. Security personnel often become frontline contact between patrons and library social workers. “We can make good conversation with them, they get used to us, they know we’re on their side,” said Rudolph. (AP Photo/Bebeto Matthews)

Despite fraught encounters with people in crisis, Narkiewicz, who works part-time right now, still hopes to find a full-time job in the library field.

“Some days are really difficult. Some days are amazing and terrific,” she says. “It’s quite an eye-opening, but an amazing, wonderful career.”