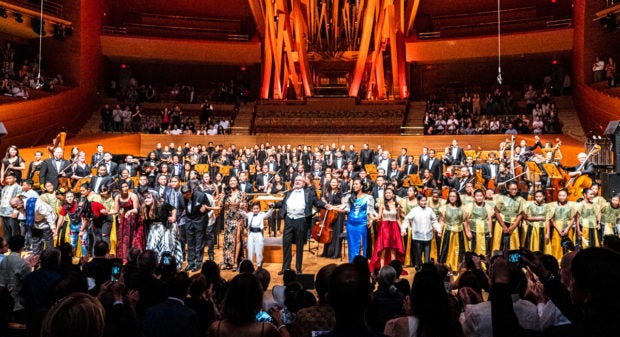 The Filipino American Symphony Orchestra and its guest performers take a bow to a standing ovation at the end of its concert at the iconic Walt Disney Concert Hall in Los Angeles. RICK GAVINO

LOS ANGELES — In the summer heat of downtown Los Angeles, it was so cool to be with many Filipino families proudly listening to the songs of composer George Canseco interpreted by the University of Santo Tomas Singers Alumni and the Fil-Am children, which showcased in the 11th anniversary concert of the Filipino American Symphony Orchestra (FASO) in iconic Walt Disney Concert Hall.

Sure enough, the youth is the future. FASO believes that music enriches the musical potential of aspiring children. So, on August 3, the FASO kids (soloists Mikaela Bautista, Zachlewis Maravilla, Stazy Reoma) together with the youth string ensemble led by Erica de los Santos performed a medley of Filipino folk songs and lullabies.

Yes, how can one not almost cry when you hear the heart rending Ugoy ng Duyan composed by Lucio San Pedro and lyrics by Levi Celerio and the Ilonggo lullaby Ili Ili Tulog Anay, which speaks of a mother’s love?

FASO conductor and musical director Robert “Bob” Schroder faced the audience and said, “Because of donations, these kids are here. Before September 2018, these children were not able to play a violin. Today, they are here at the Walt Disney Concert Hall. It is part of your investment to FASO. Thank you. If you know of anyone interested, you can go to www.fasofoundation.org.” 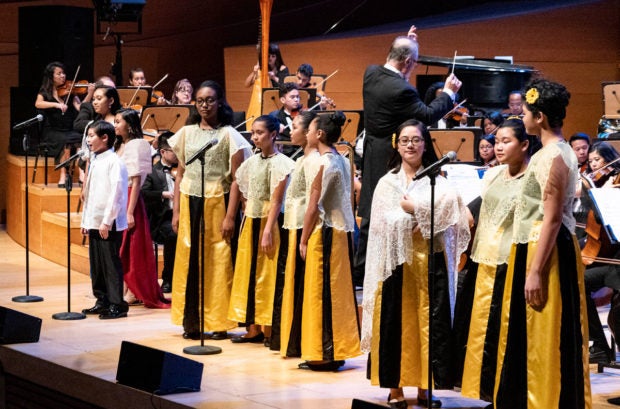 Among the new violin players were the two sisters Raelyn, 12 and Angela, 13, both of whom are also with the St. Philomena youth choir in Carson.

“It was really cool to perform in the Disney Concert Hall,” Raelyn excitedly said after the FASO concert. “I didn’t plan to learn to play the violin. I joined because my sister wanted to. In the beginning, you make mistakes and you do it again and again. I’d like to continue playing the violin. You have to keep on practicing. Violin is not a common instrument played by the youth. When I tell my friends that I play the violin, they say, ‘For real?’ It is so cool to be good at playing the violin.”

Angela, who will be a freshman at Carson High and plans to major in marine biology in college, is grateful to learn a new skill. “You capture that opportunity to hone a talent.” Angela said. “When they told us that we will perform at the Disney Concert Hall, I was slightly nervous. So many great artists performed there. What if I mess up? But all those who trained us were very patient. I like the violin because it calms my nerves and relaxes me.”

Giving an outstanding performance on the violin was Nichole Aye who has been playing the violin since she was five. Since 2017, Nicole has been studying violin at the Colburn School.

Those in the audience who love watching films were thrilled with the talents who performed music from the movies. An outstanding example is Brycen Hall, only eight years old, who sang with his mother and father, Deedee Magno Hall and Cliffton Hall, both Broadway performers. They delighted the audience with their rendition of “A Million Dreams” from the film, The Greatest Showman. Sixteen-year-old recording artist and songwriter from Sacramento, Carly Rhoades, honored the audience with “Never Enough” from the same film.

Conductor Bob Shroder displayed his excellence with two songs, “Bohemian Rhapsody” and the music from The Gladiator.

The exemplary choral music of the world-renowned UST Singers Alumni and the Los Angeles Vocal Artists (LAVA) blended with the violins in a majestic interpretation of Freddie Mercury’s “Bohemian Rhapsody.” FASO conductor Maestro Robert “Bob” Shroder gets loud bravos for his musical leadership of the only Filipino symphony orchestra outside of the Philippines. RICK GAVINO

But there was the climactic music from The Gladiator which was gripping, with the sharp playing of the drums and the trumpets. Its energy transported one to Rome’s Colosseum to witness the fights of gladiators.

Music director Bob Shroder took a bow and the audience gave him a resounding standing ovation and loud, appreciative of yells of “Bravo!” filled the air.

As I left the concert hall, I ran into Ted Benito, executive director of Apl.de.Ap Foundation, and a producer of musical concerts, and Dulce Capadocia, a talented dancer and director of the Silayan Dance Troupe. Yes, FASO is beautiful, they raved.

I told Dulce, “Bitin na bitin pa ako. I want more songs!” Dulce smiled and said, “I know. FASO is so good that you don’t want the musical experience to end.”

Indeed, we are proud of our artistic heritage which is being kept vibrantly alive in the FASO concerts.