Daly City to officially welcome all immigrants after ‘isolated incident’ 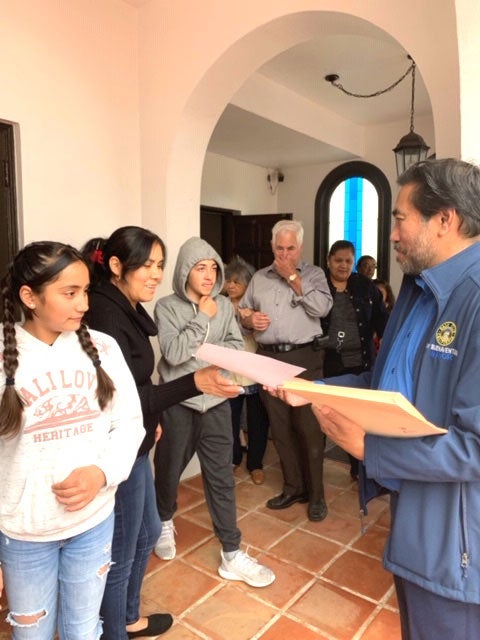 Daly City Mayor Ray Buenaventura passes out copies of resolution on immigrant protection at a parish in Daly City.  CONTRIBUTED

DALY CITY, California – This town has been known as a safe harbor for those fleeing calamity, be it the 1906 earthquake in San Francisco or the Marcos dictatorship in the Philippines, among geo-political temblors.

Now more than ever — with avowed white supremacists targeting people of color at mass shootings — the town leadership wants to dispel any doubt that the city remains open to all, especially people seeking safety from adversity.

When the City Council meets on August 12, the biggest item on the agenda is a resolution declaring Daly City as a “Welcoming City” to residents, workers and visitors.

The proposed resolution comes as the city’s tolerance of immigrants came into question when recently police allegedly stopped an undocumented immigrant from El Salvador, questioned him on his immigration status and then turned him over to Immigration and Customs Enforcement (ICE). 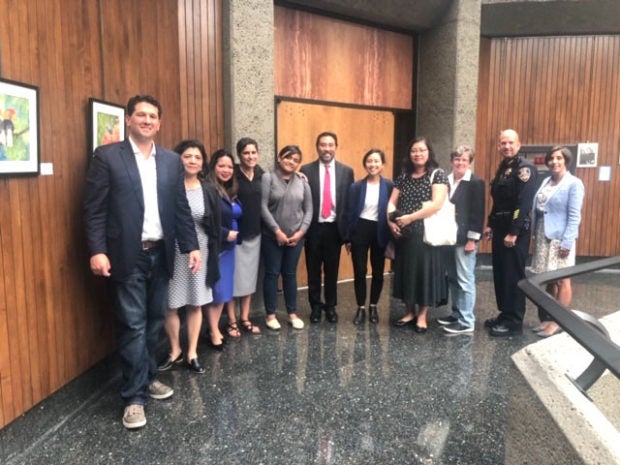 District 5 Supervisor David Canepa with Mayor Ray Buenaventura and Council Member Juslyn Manalo, City Manager Shawna Maltbie and DCPD Chief Patrick Hensley meet with Angela Chan of Advancing Legal Justice – Asian Law Caucus, members of Faith in Action and the girlfriend of the undocumented immigrant turned over to ICE to discuss the case that prompted a claim against the City.   CONTRIBUTED

“A Welcoming City is the main program in the U.S. for cities that resolve to welcome refugees,” said Mayor Ray Buenaventura.  “Given the current anti-immigrant sentiment that has been spreading across the country, I thought it was time Daly City took action to address the issue and help stem the tide.  I thought what better way than to extend a welcome to the people that need it most, who have no place to go.”

Member cities commit to issue a welcoming resolution, hold an annual Welcoming Week event, and conduct the annual State of the Welcoming survey.  Application for membership is annual basis and entails associated fees.

San Francisco and San Diego are the major member cities in California along with Anaheim, Chula Vista, Oakley and Santa Clara.  San Jose is in the process of certification.

The Welcoming City Program differs from the Refugee City special status for displaced people which involves infrastructure development to build settlement for settlers and other intricacies, said Buenaventura.  He urged the public to participate in ongoing discussion of the subject.

Attendees at the meeting in Council Chambers on 333 90th St, Daly City, CA 94015 are invited to express their concerns and opinions in 2-minute allocations before the five officials they elected to represent them take the crucial vote.

In early spring, Buenaventura was already exploring city programs to identify his city’s position amid anti-immigrant and racial resentment stoked by pronouncements primarily from the White House.  The Filipino American head of the 4 FilAm-member City Council had disclosed in April to Inquirer.net that the town leadership was poised to send an unequivocal message supporting immigrants. 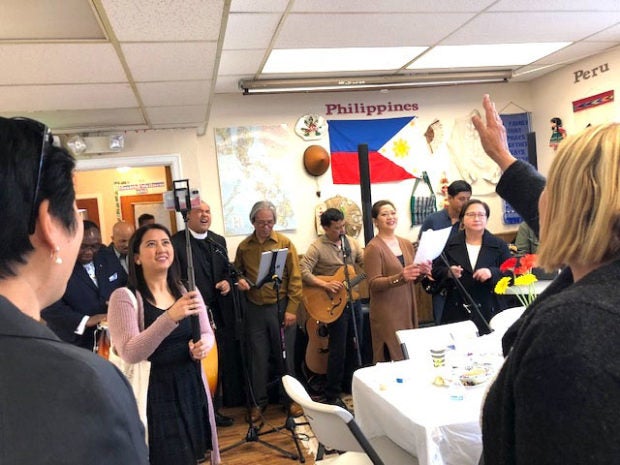 Tagalog reverberates over Chinese and Spanish as the most spoken language after English at community and commercial centers here. CHERIE M. QUEROL MORENO

Empathy, the trait often cited as lacking from statements by the U.S. president, abounds in the northern tip of San Mateo County.  The ability to understand and share the feelings of people from different origins arises from common beginnings.

Buenaventura himself was born in the Philippines.  Newest City Council Member Rod Daus-Magbual was born in Canada.  They represent the city on the United States mainland with the highest concentration of Filipinos per capita, including Vice Mayor Glenn Sylvester, who was born in Brooklyn, New York, and Juslyn Manalo, a San Francisco native.  (Lone non-Filipino Council Member Pamela DiGiovanni said she was born in the East Coast.)

Until the Daughters of Charity of the Society of Saint Vincent de Paul  in 1965 opened what is now Seton Hospital, Daly City residents were all born elsewhere.

“Daly City has always been a Welcoming City ever since I knew, having been raised here at the age of 8,” Manalo said in endorsing the proposed resolution.  “This step to formalize and have staff dedicated to this endeavor celebrates and honors that Daly City welcomes everyone.”

According to current updates of the 2010 US Census, Daly City’s over 107, 000 population is 52% foreign-born.  Females make up 50.3 %.  Asians – predominantly Filipino – make up over half the residents and Hispanics compose 24%.  Tagalog, Chinese and Spanish mingle with Burmese, Russian, Portuguese, Korean, Ilocano, Vietnamese and Farsi in community and commercial centers here.

People who identify as white compose 23% of the population of the city named after the dairy farmer who gave shelter to survivors of the Great Earthquake 113 years ago.

Daly City’s tradition as a safe haven recently came to question when Asian Americans Advancing Justice – Asian Law Caucus (ALC) filed a Government Code Claim against the City of Daly City for the May arrest and subsequent turnover to Immigration and Customs Enforcement (ICE) of a 21-year-old resident from El Salvador, who is undocumented.  The complaint filed last month alleges that the city had violated the defendant’s civil rights and State law.

The defendant was driving home from church May 11 when he was stopped by police, his attorney Angela Chan, ALC policy director, told reporters July 22 at the City Council meeting. She said he was not given a reason for being stopped and instead was questioned about his immigration status.

The complaint requests remedies including compensation, a U visa certification that protects victims of crime who cooperate with authorities to seek justice, amendments to the police department’s policy and training for officers in compliance with California Values Act or SB 54.

The City Council of Daly City responded to the complaint by reiterating assurance to uphold sanctity of SB54 in a resolution July 22 affirming “support and respect for all community members irrespective of immigration status and supporting SB54.”

“Although this is an isolated incident, the City is nonetheless conducting a thorough investigation into all aspects of what led to the arrest and eventual transfer to ICE.  If the investigation uncovers a violation of law or City policy, the City will take appropriate action,” Buenaventura told INQUIRER.Net.

Officials led by San Mateo County Supervisor David Canepa met with the defendant’s girlfriend and supporters, representatives of Faith in Action, a national community organizing network, and ALC to “re-establish trust and assure the safety of our community from unlawful interactions with Federal immigration authorities.” 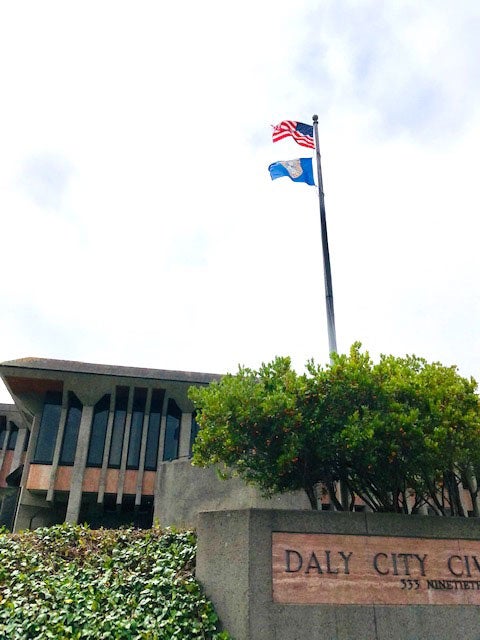 Despite a recent incident, Daly City officials affirmed commitment to SB54 and the protection of all individuals in the community.  CHERIE M. QUEROL MORENO

“At that meeting, the Police Chief, the City Manager, and the City Attorney confirmed staff’s commitment to review and revise the Police Department’s policies and their explicit alignment with the California Values Act (SB 54). The City will welcome the input from ALC and other immigrant rights advocate groups on the City’s updated policy. The commitment to immediate action will include trainings on the updated policies that reflect the California Values Act and the values of the City,” said a statement issued by the office of City Manager Shawna Maltbie.

The statement gave “no comment” on the complaint’s other recommended remedies.

“California law requires that we file an administrative complaint with a city or county before we are allowed to file a lawsuit alleging certain state law claims,” Chan said. “Once we receive the city’s response to our complaint, we can then bring a lawsuit in court.”

Policy rather than a resolution is imperative in upholding SB54, Chan emphasized.

Council members concurred, with a caveat.

“I’m about policy change as well,” Daus Magbual told INQUIRER.Net. “I think our strategy has been multiple fronts from resolution, training, adopting policy change, as well as strengthening our relationships with our diverse community.”

“We are working diligently to create policy and are in the process of doing so,” Manalo assured. “It’s our responsibility to look at everything and this is one of our top priorities.”

Vice Mayor Sylvester reminded: “All facts must be obtained before change.”

Like its colorful composition, Daly City residents espouse diverse views.  Popular neighborhood platform Next Door buzzed with multiple reactions to the DCPD turnover of the undocumented immigrant to ICE.  Some called for compassion for the defendant and people from troubled countries, while some defended police who “were only doing their work.”  Others berated those who have no legal authority to live or work here.

While impassioned, none echoed Trump’s invective to four U.S. Congress women of color to “go back” to their country.

Canepa, a former Mayor of Daly City which his District covers, said succinctly: “This should never, ever happen again. Period.”