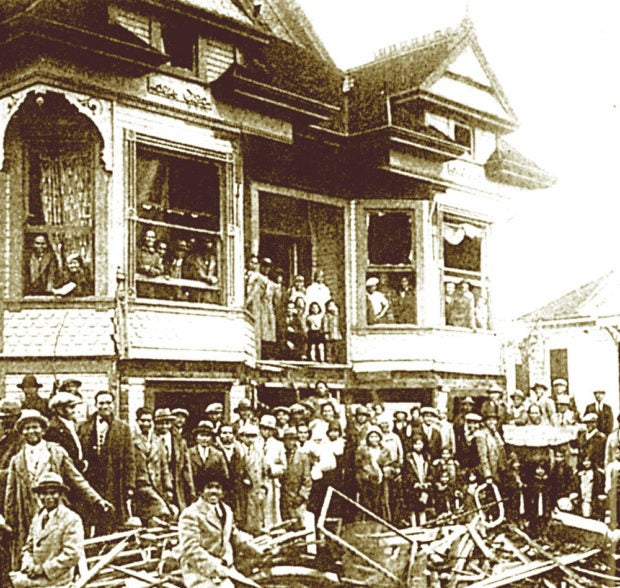 The evil that’s gripping the country, the deadly mix of guns and white supremacy, American Filipinos have seen it before.

In the 1930s, when Filipinos were brought to America as 100 percent legal, colonized U.S. nationals primarily to work the fields in California, they routinely mixed with white women in dance halls to the chagrin of white males.

Among nativist whites, it was known as the “Filipino problem.” It spawned a virulent ethnic white purity movement that targeted Filipino men, who were seen as the precursors to the villains we know as “Mexican rapists,” “MS-13 gang members,” or “invaders.”

On Jan. 19, 1930, after a night when Filipino men were seen with white women in a dance hall in Watsonville, California, a mob of 500 attacked the Filipinos in the town and rioted for five days.

On January 22, Tobera was shot and killed in his farmhouse bunk. No one was charged for his murder.

Instead of sympathy for the Filipino workers, the violence fueled more anti-Filipino sentiment throughout the farm communities of Northern California. Laws prevented intermarriage between Filipinos and whites in 1933. And in 1934, Congress gave in to calls to repatriate the Filipinos, installing a de facto immigration ban—50 people a year.

Asian Americans aren’t above the fray in any of the gun violence happening today. We were targeted before. We can be targeted again.

I felt the pain of history this past weekend and was not reassured by our president as the week began. We just had the most hellish July ever, with temperatures rising almost as high as the racist presidential rhetoric to which we’ve been subjected.

Add to that the gun violence of Gilroy, El Paso, and Dayton, and you get the feeling America is about to combust–251 mass shootings in 216 days? We all should weep at America’s “war within.”

Trump to the rescue?
After spending the weekend failing to rise to his role as consoler-in-chief, Trump finally figured out what to read on the teleprompter Monday morning.

“In one voice our nation must condemn racism, bigotry and white supremacy,” Trump said at the White House. “These sinister ideologies must be defeated.”

So is he going to do us a favor and resign? Wishful thinking.

For Trump, a teleprompter is like a lie detector. Its mere presence indicates a lack of truthfulness. He’s reading some hired gun’s words.

Sure didn’t mesh with an earlier tweet Monday, when Trump mixed gun legislation with immigration reform. Like the two go together?

For how Trump really feels, you have to go to a rally and see him riff before his fan base, as in the May 5 clip in Florida when he wondered aloud about what to do with immigrants at the border, and someone in the crowd yelled, “Shoot them.”

No denunciation from the hater-in-chief, just a smile and a joke to reflect it all. Then he blamed the shootings on everything from the fake news media to video games, everything but his own hateful rhetoric.

As he exited the podium on Monday, Trump said “Toledo” instead of Dayton, missing only by about 150 miles. Suddenly you see the wide berth of Trump truth. Enough to span 10K lies and misleading statements.

Fighting the persistence of hate

So it’s not just a gun problem. We have a leadership problem. And a general humanity problem.

Fortunately for Trump, America also has an attention deficit problem when it comes to a news cycle that assures a different set of problems 24 hours a day.

How many of you felt when the Gilroy shooting happened on July 28 and three people died, including six-year old Stephen Romero, that it was just a normal occurrence in America? A six-year old boy shot dead?

Well, we did have Sandy Hook and look what resulted. Nothing.

The fact that the perp, Santino William Legan, made an Instagram post referring to “Might is Right,” a 19th century book popular among white supremacists, was a bit unnerving. But the story died as the Democratic debates came on. At least several candidates knew it was time to call Gilroy what it was: an act of domestic terrorism. 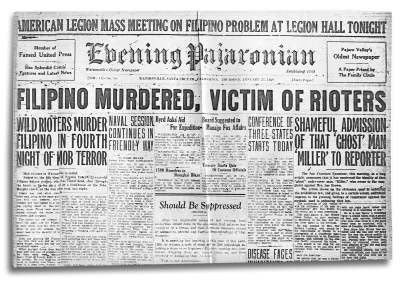 News report on the Watsonville anti-Filipino riots in 1930.

By the way, I don’t mind at all mentioning each and every alleged perp by name. They were enabled by the anonymity of the internet. And then given the green light for their actions when they saw Trump take off the hood and challenge people of color so vigorously.

They were just following the signs.

But in Gilroy, we didn’t even get loud strident calls for gun safety laws. The House passed them. The Senate, led by Sen. Mitch McConnell, husband of one of the most powerful Asian Americans in the Trump administration, Transportation Secretary Elaine Chao, just doesn’t see fit to make them into law.

#MassacreMitch is too beholden to the NRA. Or at least the parts of him that aren’t reserved for Russian election hackers, who know him as #MoscowMitch.

And with all that, Congress adjourned for its August recess.

Then Saturday in El Paso happened.

Patrick Crusius, 21, of Allen, Texas (near Dallas), drove to the Walmart in El Paso and fired into the crowd, killing 22 and injuring 24. He also left a manifesto like the Christchurch shooter earlier this year, Brenton Tarrant. The white supremacy is undeniable. Crusius’ manifesto speaks of Hispanics as “invaders,” the same hate rhetoric used by Trump.

The president, who previously went after the four women of of color in Congress known as “The Squad,” as well as Rep. Elijah Cummings’ Baltimore, is not just on the record about his hate rhetoric; he revels in it as a political tactic.

And now it comes back to haunt. I began to feel it. I was up at 1a.m. ET, but had turned off all media.

If I hadn’t, I would have been stunned by Connor Betts, 24, who opened fire in Dayton’s entertainment district. His sister was killed, along with eight other people; 26 were injured.

I didn’t hear the news until driving to a Catholic church Sunday morning. I was a visitor, late to mass, and a sign at the door said “NOTICE: Effective immediately, exterior doors will be locked prior to the start of each mass.”

I had to circle around to the main entrance to enter. I asked them why the signs.

“All the church shootings,” the deacon said, referring to the mosques, synagogues, and temples shot up in recent memory around the nation. They had been up a while.

Once in the church, I didn’t feel safe. I was one of four or five brown people in a congregation of 500 people who were not overly friendly to a stranger.

I was told I was in a mission of the main church, which was in the next town and was all-Hispanic. This mission was all-white. This is the way segregation works in America today.

I left the church apart from the congregation, isolated, and immersed in the Dayton and El Paso developments. The new shootings had eclipsed Gilroy, but were just part of the same problem. In an entertainment district, at a food festival, at a Walmart. All Americans can relate.

In public, people of color are under the gun. As America becomes more diverse, the country has a white people problem. Still.

It had been in remission. But it’s out now, encouraged by the divider-in-chief, the most racist president of modern times.

Republicans of color are coming to their senses. But others are sticking with him, as are the most hateful members of his base.

The FBI warns that many more may be inspired by the recent attacks. In a country of 330 million, even if one/one-millionth are so moved, that’s 330 white supremacists in the mix. And they can do a lot of damage.

Remember Fermin Tobera. Time to stand tall. United against hate. With or without the president and his hollow words.

Emil Guillermo is a veteran journalist and commentator. He writes a column for the Inquirer.net’s North American Bureau. Twitter @emilamok