It was the last morning of the workweek, and Scott Bremner, a popular talk-radio host here, found himself again in the role of an accidental referee on the issue of race. And again, the discussion was inspired by racial provocations from President Donald Trump ‘White America’. For one caller, critics of Trump had things upside-down.

“It has nothing to do with race, and those who suggest that it does, they are the real racists,” the caller said.

“We’re getting angry again, and I’m telling you we’re going to step up again and vote for Trump because we are not racist, Trump is not a racist and you guys are fomenting this stuff.” 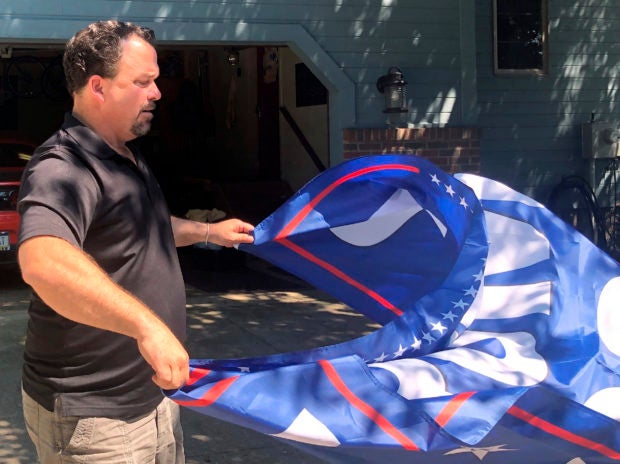 In this July 31, 2019, photo, Jim Noland unspools a Trump flag near Erie, Pa. He cheered Trump on when he tweeted about Rep. Elijah Cummings district anchored in Baltimore. Through Nolan’s lens, Trump’s message wasn’t racist, it was truth. (AP Photo/Claire Galofaro)

Before Bremner could respond, the man hung up. “Make your point and run,” Bremner said. “That’s a good way to have a discussion.” Yet that is the way many Americans seem to be discussing the nation’s roiling racial discord.

The next morning, a young man 2,000 miles (3,220 kilometers) away posted a hateful, anti-immigrant screed on the internet.

Walked into a Walmart in El Paso, Texas, with a gun and shot 22 people dead. By the time Bremner signed on again Monday morning, another man with a gun had stormed an entertainment district in Dayton, Ohio, killing nine, though his motive remains unknown.

Bremner’s show carries just one current of the heated national debate on race that has been fanned by Trump’s unrepentant use of white identity politics and inflamed by white supremacist violence like the shooting in El Paso.

In interviews with The Associated Press across a half-dozen states, voters see a country riven by racial animus better than a generation ago, but worse than before Trump’s presidency, with little choice but to confront the long national struggle anew. 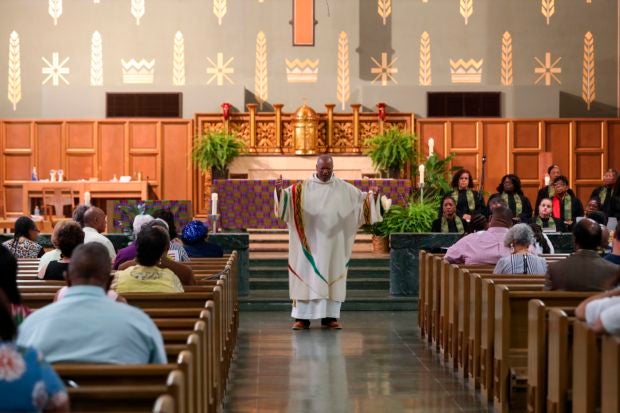 In this May 27, 2019, Royce Winters, a former police officer and the director of African-American Ministries for the Catholic Archdiocese of Cincinnati, preaches the homily during Mass at the Church of the Resurrection in Cincinnati. Winters said that the fight for equality continues. “We have to do this together,” he said. “If we don’t have our white friends, our white counterparts, to advocate for doing what is right, we won’t get past this. (David Gifreda/The Cincinnati Enquirer via AP)

Months ago, Bremner, who considers himself a moderate, “a lone voice in the wilderness,” wondered if the Republican president’s comments offered an opportunity to address the racism that has been long-simmering.

He tried to establish whether his listeners could agree on a fundamental question: What is racism? The answer, he realized, is no, they don’t even agree on that.

“One of the byproducts of having a president this polarizing, all this stuff starts to come out, which you could argue might be a good thing in the long term,” Bremner said. “Will it lead us to a better day? I can’t tell you yet.”

Racial and ethnic polarization has been a hallmark of Trump’s political rise and is central to his reelection.

He’s warned of an “invasion” at the southern border, posted racist tweets about four women of color in Congress and attacked Democratic Rep. Elijah Cummings’ largely black district as a “rat and rodent-infested mess.”

Trump needs to maximize support from white voters in places like Erie County, a former Democratic stronghold with withering manufacturing industry and a declining population.

The county chose President Barack Obama twice, then flipped for Trump and helped narrowly deliver him the key state of Pennsylvania.

The churn over Trump’s racial polarization has largely taken shape along ideological lines: Those on the right root for him more, as those on the left see their own anger rise.

Jim Noland unfurled a Trump flag as big as a minivan in a rural town near Erie. He cheered Trump on when he tweeted about Cummings’ Baltimore-area district. Through Noland’s lens, Trump’s message wasn’t racist, it was the truth.

“Before, you just wouldn’t disagree with (Democrats) because you were afraid of being called a racist,” he said. “And now you disagree with them because their ideas are bad, and that’s enough. When they call you a racist back, you can laugh.”

He dismissed any link between Trump’s rhetoric and the El Paso’s shooting suspect’s post. The problem was one deranged man, he said.

Lucinda Rodriguez, the daughter of a Mexican immigrant, has a colleague who was killed and a friend who was seriously wounded by the El Paso gunfire. She said the killings affirm for her a rising hatred toward Latinos. Yet Trump’s rhetoric, she said, didn’t load any gun or pull any trigger. 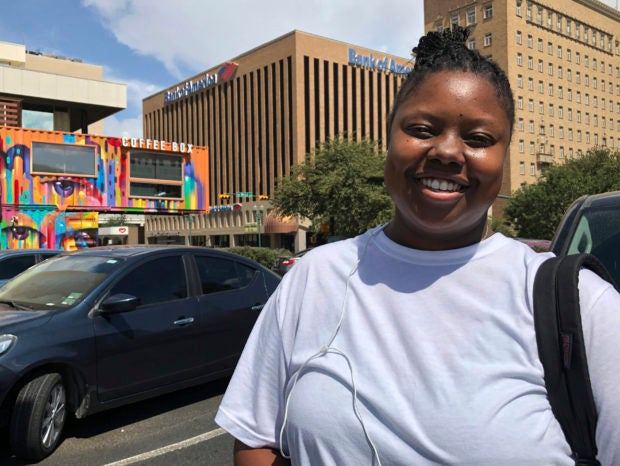 In this Aug. 4, 2019, photo, Infinity Tucker poses in El Paso, Texas. Tucker, an El Paso native who identifies as Afro-Latina, spoke about Sunday’s shooting in El Paso. “He’s a grown man,” the 23-year-old said of the suspected killer. “He’s able to make his own choices.” (AP Photo/Astrid Galván)

At a vigil mourning those killed in Dayton, attendees echoed the reluctance to assign fault to the president. A 74-year-old black woman, Rickie Myles, said she’s increasingly fearful in an environment where “people spew hate” with ease. But Myles sees no way to understand his motives. “All we can do is speculate,” she said.

Away from the visceral responses of El Paso and Dayton, the response has largely cleaved along politically polarized lines.

Lucretia Hughes, a black conservative activist and former tea party leader in Georgia, points to the nation’s long history of racism and calls it “ludicrous” to blame the current flare-up on Trump.

She sees a president who fights aggressively, if unconventionally, for an undervalued part of the electorate  “the real majority, the real middle class and working class” that’s made up of all races and creeds. Trump delivers a brand of populism “that isn’t about color.”

Talina Massey in New Bern, North Carolina, has little problem steering responsibility to the Oval Office and an occupant she sees as deliberately indulging the worst human instincts.

Massey, who is a black 35-year-old retired Marine, said that the environment could be so toxic that ousting Trump in 2020 might not be enough to calm the water.

“It’s not a matter of party lines anymore,” Massey said. “It’s a matter of good vs. evil, the ultimate conflict.”

And it’s certainly a reminder that Trump’s approach whether strategic or intuitive or some combination doesn’t just energize voters inclined to his rhetoric.

It emboldens his critics, particularly nonwhites, younger whites who value diversity and moderate older whites uncomfortable with Trump’s values. All of those groups will influence Election Day outcomes as much as Trump’s white base in the key states whose narrow 2016 margins delivered his Electoral College victory.

Trump “allows what’s been under the surface to bubble up,” says Catherine Meeks, a 73-year-old black woman who leads a race reconciliation ministry for the Episcopal Church in Atlanta. But long-term progress, she said, depends on whites who aren’t usually at the center of open racial conflict. In this Friday, Aug. 2, 2019, photo, Scott Bremner, talk radio host, works in Erie, Pa. Months ago, Bremner had tried to establish if his listeners could agree on a fundamental question: what is racism? The answer, he realized, is no, we don’t even agree on that. (AP Photo/Claire Galofaro)

“We are still in a place where there are too many white people who think the world belongs to them, and they don’t want to share it with anybody,” she said, noting projections that the U.S. could become majority nonwhite sometime around the mid-21st century.

“I don’t care if we have an amazing president, we still have this work to do, bringing along white people who feel like they’re losing ground with too many black people, too many brown people.”

In Cincinnati, Royce Winters, a former police officer and the director of African American ministries for the Roman Catholic Archdiocese of Cincinnati, said the fight for equality continues. “We have to do this together,” he said. “If we don’t have our white friends, our white counterparts, to advocate for doing what is right, we won’t get past this.”

A couple of months ago, a young white man, D.J. Smith, wandered into a Democratic political meeting in Erie and said he was sorry. He voted for Trump because he’d always been Republican, hadn’t paid much attention to politics and never thought much about race or privilege.

But then suddenly he did. The question presented itself at an unusual moment: He was a software engineer and dumbfounded by the repeal of net neutrality. It occurred to him suddenly that he had not needed to pay heed before because he was white and male and the country generally worked in his favor.

It’s no mistake—U.S. president is racist and un-American

“I had an ‘Am I the bad guy?’ moment. I realized that I was, and I started to open up my eyes,” the 29-year-old said. He probably made racist jokes in the past, he thought and said insensitive things.

He was consumed by remorse for his thoughts and comments and found himself “freaking out.” He quit his job. He could not conceive of going on as normal as the nation convulses, he said and started searching for a way to help bring the county back together.

When Bremner returned to his show Monday to discuss the weekend shootings, the lights on the phones blinked red with callers.

One apologized for being emotional. The El Paso shooting suspect had used language that mirrored the president’s own remarks, the caller noted. He had written that the massacre was a response to the “invasion” of immigrants coming over the southern border. At a recent rally in Florida, the president asked rhetorically how to stop migration. “Shoot them!” one person in the audience shouted. The crowd cheered; Trump chuckled.

“We’re going to see more and more and more of this,” Bremner’s caller said. “Because they think the president is on their side because they hear him saying the things they’re thinking. So there have been plenty of red flags and plenty of warnings, and we need to wake up. When a terrorist is using the exact same language as the president, it’s time to make a change.”

The next caller said he disagreed.