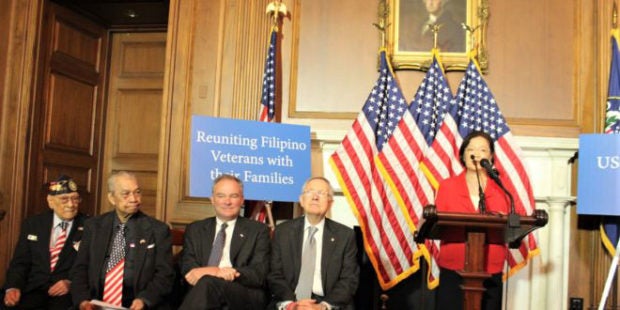 US Citizenship and Immigration Services announced Friday that it will terminate the Haitian Family Reunification Parole program and the Filipino World War II Veterans Parole program, which were designed to promote family reunification.

“Parole” programs allow certain family members of US citizens or Green Card holders to temporarily enter or remain in the United States, even if they would otherwise not be allowed entry.

The administration argues that these should be done on a “case-by-case” basis, rather than as a category, CNN reported.

The Filipino World War II program went into effect in 2016, allowing some veterans and their spouses to request certain family members be allowed into the US.

Last month, Sen. Mazie Hirono, who lobbied for the program during the Obama administration, encouraged eligible veterans last month to apply for the program, which was set to expire in June 2021.

“Facing a decades-long visa backlog, thousands of our aging Filipino World War II Veterans have been unable to reunite with their family members still living in the Philippines,” Hirono, a Hawaii Democrat, said in a statement at the time. “But thanks to the Filipino World War II Veterans Parole Program, nearly 300 families have been reunited in America.”

Brendan Flores, national chairman of the National Federation of Filipino American Associations, criticized the White House’s move: “Ending this program now diminishes the legacy of our proud Filipino American WWII veterans, and is an unfortunate rebuke to the very few remaining veterans, who’s opportunity to reunite with their families will end with this action.”

“It’s senseless and totally unacceptable to terminate the parole program for family members of Filipino veterans who have waited for the opportunity to have their families join them in the US legally,” FilVetREP National Chairman Maj. Gen. Antonio Taguba (ret) said in a press statement.

The Haitian program was created in 2014 to “promote family unity” and support Haiti’s long term reconstruction and development through potential remittances, according to USCIS.

At the start of the program, the immigration agency estimated it would conduct approximately 5,000 Haitian program interviews a year.

The issue of parole has gotten increased attention recently, after reports that the administration was moving to scale back similar benefits that are offered to military families.

“Under these categorical parole programs, individuals have been able to skip the line and bypass the proper channels established by Congress. With the termination of these programs, these individuals will no longer be permitted to wait in the United States for their family-based green card to become available, consistent with the rules that apply to the rest of the world,” said USCIS Acting Director Ken Cuccinelli.