Trump gets Nixonian, fires FBI director who was investigating him 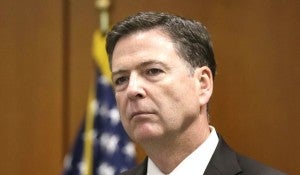 May 9 was a good day for Rodrigo Duterte. South Korea elected a new president Moon Jae-in, who is open to talks with North Korea, potentially putting the country at odds with the U.S.

Who do you think Donald Trump will count on more as an Asian ally?  The former “little brown brother”?

On the very same day, Donald Trump made his latest autocratic move by firing FBI director James Comey, who happens to be conducting a probe looking into collusion between the Trump campaign and Russia.

Trump said the firing was for Comey’s handling of the Hillary Clinton e-mail investigation. But don’t buy it. It’s Donald Trump at his autocratic and strongman best.

The significance of that?

It was while Nixon was in power that the green light was on for Ferdinand Marcos to begin his reign as the oppressive and corrupt dictator under martial law.

That was later augmented further with Reagan and the first Bush administration. But Marcos rose under Nixon. And with the Comey firing, the one word to emerge for Trump is “Nixonian.”

Nixon’s the one who also tried to cover up the Watergate scandal by firing special prosecutor Archibald Cox on October 20, 1973, a day known as the “Saturday Night Massacre.”

I remember that night as a college freshman walking through Harvard Yard wondering what was happening to our country. And now the parallels are striking.

Firing the man who is investigating you and your administration? Just like Nixon did?

Using the political “N” word to cast Trump’s villainy may have been premature before this week.

A few months back, Trump went to Twitter one Saturday morning and suggested that then-President Obama had wiretapped Trump Tower. Former Nixon lawyer John Dean, the former White House counsel who was charged with obstruction of justice for his role in Watergate, went on MSNBC in March, talking about how the Trump administration seemed Nixonian.

“In fact, they are in a cover-up mode. There’s just never been any question in my mind about that,” Dean said. “I’ve been inside a cover-up. I know how they look and feel. And every signal they’re sending is ‘we’re covering this up.'”

“This White House is not showing their innocence,” he said. “They’re showing how damn guilty they are, is what we’re seeing.”

Comey has shown his unwillingness to help Trump by declaring there was no evidence to back a claim that Trump Tower was wiretapped. And then there was his recent testimony before Congress, which coincided with reports that he asked for more money and resources for the FBI investigation into the Trump-Russia links.

It must have finally triggered Trump’s infamous phrase: “You’re fired.” Great for a reality show. Lousy for a democracy.

Even the way Trump did it was a bit odd. He didn’t talk directly to Comey, who was in Los Angeles speaking at a field agent function. Reportedly, Comey got the dagger while TV monitors, tuned in to news stations, heralded the news on the lower third of the screen.

Comey thought it was a prank. But it was just the way Trump does the presidency. And America.

This is why those who say they want the government run like a business will eat their words.

Because Trump is running things like a capitalist authoritarian who puts his interests above all. It’s in his letter firing Comey.

“While I greatly appreciate you informing me, on three separate occasions, that I am not under investigation, I nevertheless concur with the judgment of the Department of Justice that you are not able to effectively lead the bureau,” Trump said in a letter dated May 9, asserting his innocence as he threw Comey under the bus.

The White House also released another letter by Attorney General Jeff Sessions (the guy who recused himself on all things Russia) and deputy attorney general Rod Rosenstein that gave his Trump “cover.” That provided the pretext—the reason that’s not the reason– that it wasn’t the Russian investigation, it was the handling of the Clinton emails that caused the firing.

Almost plausible? But no Clinton supporters or Democrats were pushing for  Comey’s head, not now.

Clinton’s emails are old news. Candidate Trump liked the ruckus Comey caused when it helped him win the presidency. But this Russian investigation is another matter.

Even the day-after news conference, spokesperson Sarah Huckabee Sanders, only made the swamp talk murkier, when she pointed out that Trump was actually upset with Comey back in July.

How about this: Getting rid of Comey allows Trump to “fix” things at the FBI with a Trump “loyalist” who will do exactly what he’s told.

That’s more credible than Sanders, or even Kellyanne Conway, who resurfaced on TV to defend Trump and say it wasn’t about Russia. Conway is good on pretext though short on truth.

Even the Justice Department has come out saying that reports of Comey’s firing, following his request for more resources for the Russia probe, are false.

But it’s too late. Comey’s firing is about Russia, even if just by coincidence.

And now Trump has lost all credibility by firing the man investigating his approach to power and the presidency.

Even moderate Republicans are questioning Trump’s timing of the Comey firing. Why didn’t Trump do it in January, they ask? Well, he liked Comey then. But once  the FBI began to move in and work for the American people, not so much.

Now Democrats, caught by surprise, have new life. They’re demanding a special prosecutor to be appointed to assure fairness and strict adherence to the rule of law. They didn’t mind Comey as long as he was going after Trump.

In the meantime, the optics just aren’t working for Trump who manages either wittingly or unwittingly to make things worse for himself.

Maybe not for Trump.

It wasn’t Nixon saying “I am not a crook.” But the historical echo was clear as  Trump gave his answer while sitting  next to Henry Kissinger, the former Secretary of State under Nixon during Watergate.

It was the first statement on Comey for the ethically challenged Trump–the New Nixon.

What he’s done is far worse than the Saturday Night Massacre. And as the probe  plays out, with issues of treason and abuse of power, a far greater threat to  democracy  than even Watergate.

If you’re an American Filipino, this isn’t good news. But if you’re Rodrigo Duterte, who just got an invite from Trump, who himself has business interests in the Philippines, I’d say it’s a good day.

A Nixonian Trump sadly will mean a Duterte can do no wrong. Seven thousand extrajudicial killings? Skies the limit.

Just like Nixon gave Marcos his tacit approval, the confluence of events in South Korea and at the FBI, means we should expect Duterte to assert more and more authority. And all of it is likely to go unchecked from the New Nixon, Donald Trump.

Emil Guillermo is an award-winning journalist and commentator. Follow him at http://www.twitter.com/emilamok