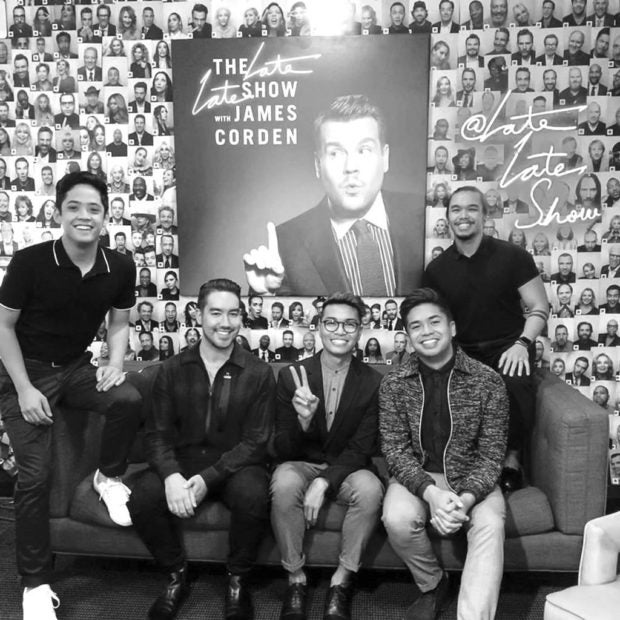 LOS ANGELES– Filipino American a cappella group The Filharmonic on Tuesday night, July 30, showcased its talents by performing famed ballads and bops on the “Late Late Show with James Corden.”

“Whenever I turn the radio on now all I’m getting on the radio are like slow boring ballads — do you know what I mean? I want to roll down the windows. I want to jam out. No one wants to hear some guy on the guitar crying about his girlfriend in the middle of the summer. It just feels wrong,” Corden told his audience.

Grammy winner John Legend rebutted, “For me…summer’s a time to slow things down.”

Corden and Legend settled their argument with a “ballads versus bops” riff-off, with the help of The Filharmonic. Among the songs they performed were All-4-One’s “I Swear,” Jonas Brothers’ “Sucker,” and Billie Eilish’s “Bad Guy.”

Legend settled the score with his hit, “All of Me,” which the Fil-Am group called “an unreal, full circle moment” in an Instagram post.

“All of Me was one of our first music videos we put out as a group back in June 2014. Singing it last night [email protected] on @latelateshow was such an honor,” they added.

The Filharmonic gained popularity after being featured on NBC’S hit musical competition, “The Sing-Off.” From there, they appeared in the Universal Pictures hit movie, “Pitch Perfect 2,” and set off to become viral sensations after their appearance on the “Late Late Show” appearance.