Williamson, not wonks, was angel of Dem debate 2 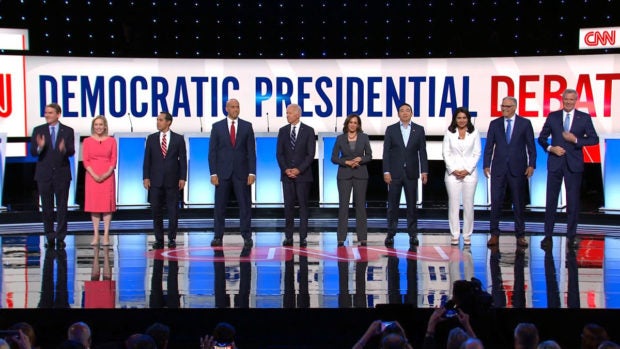 Vincent Chin, the most famous of all Asian American hate crime victims, was murdered in the Detroit area, so maybe that was our way of being present at CNN’s Democratic presidential debate 2019, night one.

I listened for us. I didn’t hear Asian Americans mentioned once. Not even in what I call the “litany of diversity,” when a candidate lists all the ethnic groups in America, i.e, “Blacks, Latinos, Asians, LGBTQ…etc.”

But that didn’t even happen during night one, the whitest group of Democrats you could wrangle up in Montana or anywhere.

Night two was better. We showed up with Andrew Yang, Mr. Guaranteed Income.

But as Corey Booker said that night about Biden, I’d apply to Yang: “He’s dipping into the Kool-Aid and he doesn’t know what flavor.”

Yang’s the rich Asian with a quite brilliant idea. Give everyone $1,000 a month. Don’t call it welfare. Because like a true entrepreneur thinks, Yang feels we can all start businesses!

He’s turned welfare from socialism into capitalism! That’s the tech disruption for you.

To that Yang got the biggest applause of his political career, something that will either be the turning point in his campaign or the best campaign memory to tell his Asian American grandchildren.

“So, let me share the math,” he continued. “A thousand dollars a month for every adult would be $461 million every month, right here in Detroit alone. The automation of our jobs is the central challenge facing us today. It is why Donald Trump is our president, and any politician not addressing it is failing the American people.”

And that is Yang in a nutshell. It’s a new idea that’s embraced by those on the right and the left. It’s not race, it’s class. And it’s generational. It speaks to a lot of his support, many of them reading this in their sweat pants while playing video games with Dorito stained fingers on Twitch and all while commenting on Reddit.

That’s the voter who sees Joe Biden and sees not the former vice president, good enough for Barack Obama. They see the high school principal. No pal.

Yang has captured the young on the left and right. And maybe a few others.

But he’s also riding the model minority train. He had a chance to show compassion in immigration for the border crossers, those in cages, DACA recipients, asylum seekers.”

Instead he wants to tell the story of immigrants like his father, responsible for over 65 patents for G.E,  and IBM.

He’s all entrepreneur all the time. Passion, yes. Compassion, not quite.

A new idea fueled by an old stereotype. But he’s not calcified nor corrupted by a career in traditional politics like Biden and Harris.

Biden and Harris got so much baggage, they should be president of Samsonite.

Harris, I want to like, but I have a history with her going back to Asian American politics in San Francisco when she was the DA.  Harris has appeal but her record exposes the sliminess of a politico as worrisome as Biden.

Tulsi Gabbard went after Harris for grinning about marijuana use after all those years she locked up marijuana users. And that’s not even Harris’ biggest problem as a former prosecutor.

I was surprised that it was Hawaii’s Gabbard the NH in the AANHPI who chose to clash with Harris a fellow Asian American.

It’s a thin sisterhood. In the strange CNN format, Gabbard didn’t hesitate to pounce on Harris.

But aside from that moment, Gabbard didn’t really pop. And even Harris, who had a great MSNBC debate, was flat throughout on Wednesday.  No little girl busing revelations. No “my mother is an Indian vivisector who experiments on animals” story. No mention of her brown-Asianness.  She did try a “my parents were civil rights activists” beat, but it didn’t stick. Not with me.

The debate was really about beating up on the front-runner Biden with an occasional jab at the invisible opponent Trump.

And all of them did. Well. Julian Castro was the best saying Biden hadn’t learned his lessons. On what? Everything. And Biden, the statesman, seemed ineffective to parry the strikes well.

I was really expecting race to be a bigger issue in the second debate flight with more people of color.

But oddly, it was the first debate where race made an impact.

The 2020 campaign agenda was set the last few days by that twittering nabob of Pennsylvania Avenue, who went off on rants that were both racist and speciest. Trump dumped on rats in Baltimore, then went after that city’s congressman, Rep. Elijah Cummings, as well as civil rights activist Al Sharpton. But he didn’t gaslight afterwards. Trump owned it all by declaring himself the “least racist person there is anywhere in the world.”

It’s evident that Trump wants this campaign to be about race, white grievance, and American identity. It’s all the explosive issues that intentionally divide an electorate. There’s no middle ground. And now all the secret racists have a person to be their public racist.

With Trump, you can shamelessly lie to pollsters and, under cloak of secret ballot, turn the voting booth into the most despicable hood of all.

That’s how Trump is hoping all the voting marbles will funnel down into his camp.

Public racists have run in our representative democracy before. George Wallace was Governor of Alabama and ran for president.

But this is 2019, in an America that has never been more diverse.

And Trump is betting that it is time for a new kind of politics. Open, out-front modern representative racism.

So, of course, the set of white Democrats in Tuesday’s debate weren’t the best group to deal with this. Bernie Sanders and Elizabeth Warren were the presumptive leaders in the first batch.

Bernie went after the racial gaps in economic injustice. He mentioned South Carolina Congressman Jim Clyburn’s 10-20-30 approach to ending poverty in the black community and backed a Thurgood Marshall Plan for education. (Marshall, the late Supreme Court justice, was married to a Filipina, and they had a son who bears his name. A hidden Asian American reference?) But somehow all his talk didn’t offset the hate put out by Trump.

Warren was a bit better. She was asked about the recent Gilroy Garlic Festival shooter’s advocacy of a 19th century White Supremacist, and was quick to point out that we need to expose it and fight it as “domestic terrorism.” But then she dealt with racism in her wonky way, talking about ending the black/white wealth gap with education, Pell grants, and funding to HBCUs (Historically Black Colleges and Universities). Good, but again, platform pamphlet stuff.

Debates are for fire and passion. Moments that pop.

In the first go-round, no one popped. Not on race. Except for Marianne Williamson.

She’s way out ahead of everyone as a truth teller on race. Few have realized that the way to fight and beat Trump is not by being a traditional politician. No one touched reparations in the last debate on NBC. Not like Williamson did on Tuesday.

She was challenged by CNN’s Don Lemon on her position to provide $500 billion in financial assistance to descendants of slaves. What made her qualified to determine how much is owed in reparations?

Williamson: Well, first of all, it’s not $500 billion in financial assistance. It’s a $200 to $500 billion payment of a debt that is owed. That is what reparations is. We need some deep truth telling when it comes. We don’t need another commission to look at evidence. I appreciate what Congressman O’Rourke has said. It is time for us to simply realize that this country will not heal. All that a country is is a collection of people. People heal when there is some deep truth telling. We need to realize that when it comes to the economic gap between blacks and whites in America, it does come from a great injustice that has never been dealt with.

That great injustice has to do with the fact there were 250 years of slavery followed by another 100 years of domestic terrorism. What makes me qualified to say $200 to $500 billion? I’ll tell you what makes me qualified. If you did the math of the 40 acres and a mule, given that there were 4 to 5 million slaves at the end of the Civil War—they were all promised 40 acres and a mule for a family of four. If you did the math today it would be trillions of dollars. I believe that anything less than $100 billion is an insult, and I believe that $200 to $500 billion is politically feasible today, because so many Americans realize there is an injustice that continues to form a toxicity underneath the surface.

That was Trump’s secret in 2016. Only Williamson doesn’t lie like Trump, the non-traditional business person who won the “fed-up” voter. The anti-politician vote.

Williamson’s the only non-traditional Democrat–the anti-politician for the good guys.

And she’s the purest anti-Trump. He’s all wolf-y hate. She’s all lamb-y love.

When Williamson talks love and truth telling, she soars where politicians usually don’t. Because when the others go wonky, they don’t address the heart. They don’t hit the emotional buttons that show they care for the voters. It’s not enough to say, “I will fight for you.”

You won’t fight if you don’t care.

In a room of policy nerds, Williamson shows she cares and isn’t afraid to show her heart.

Bernie loved to talk numbers. All the millions who will lose insurance, etc. etc. It keeps fact checkers busy. But the facts don’t sell like the emotional pitch.

Can’t vote for someone who can be logical on reparations and be so loving and truthful? Well, Filipino Americans voted for someone hateful and deceitful, plus racist, sexist, and homophobic.

Time to consider the alternative?

Democratic wonks should pay heed to the non-traditional voices this campaign.  It’s where the all the energy to defeat Trump is stored. And it’s the voices that are cutting through the same-old, same-old.

But beware. The anti-Trump is not Andrew Yang and his love for math. It’s Marianne Williamson and her love math.