The U.S. has recorded nearly 20 mass killings so far this year, the majority of the domestic violence attacks that receive scant national attention compared to high-profile public shootings in recent years at schools, churches, and concerts.

A database compiled by The Associated Press, Northeastern University and USA Today shows that the number of mass killings has held steady in 2019 compared with past years. But if the trend continues, the year could end with a lower death count because there have been fewer mass-casualty attacks such as those in Las Vegas, Parkland, Florida, and the Pulse Nightclub in Orlando.

Four mass shootings happened in public places so far this year, compared with 10 in 2018 and seven in 2017. But 2019 saw a big increase in the number of mass killings in domestic disputes, helping to keep this year’s overall numbers similar to past years.

There have been 10 family mass killings this year; there were 10 during all of 2017.

In July alone, 13 people were slain in three killings involving domestic violence or drugs in Missouri, Wisconsin and Washington state, but those stories drew little attention. Meanwhile, a gunman killed three people and wounded 12 at a garlic festival in California, with smartphones and social media quickly spreading the word.

“There were more people killed in Wisconsin than in California,” said Northeastern University professor James Alan Fox, referring to five family members killed Sunday in Wisconsin. “Three of the four were family members, so it doesn’t get the same attention because people don’t feel at risk.” 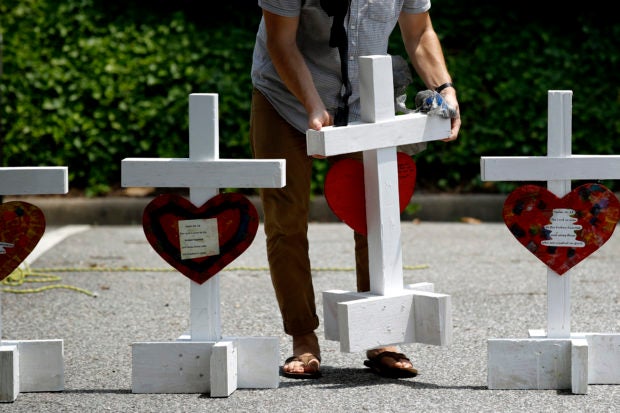 FILE – In this June 2, 2019, file photo, a volunteer prepares to place crosses for victims of a mass shooting at a municipal building in Virginia Beach, Va., at a nearby makeshift memorial. The U.S. has recorded nearly 20 mass killings so far this year, including the one in Virginia Beach, the majority of the domestic violence massacres that receive scant national attention compared to high-profile public shootings at schools, churches, and concerts in recent years. (AP Photo/Patrick Semansky, File)

The database examines every mass killing dating back to 2006 and tracks the number of variables for each. It counts killings involving four or more fatalities, not including the killer, the same standard used by the FBI.

Part of the problem with determining whether there are trends in mass shootings is “everyone has a different way of counting the data,” said Adam Winkler, a law professor at the University of California, Los Angeles.

While the FBI defines a mass shooting as four or more dead, others use a standard of three dead, and some count injuries, he said. 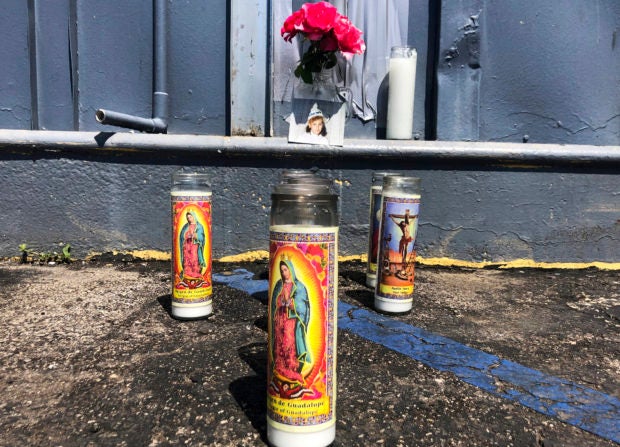 FILE – In this July 26, 2019, file photo, candles, a flower and a photograph of Azucena Lepe are displayed at the Shell gas station where Lepe was killed by a man who went on a shooting spree in the North Hollywood district of Los Angeles. The U.S. has recorded nearly 20 mass killings so far this year, the majority of the domestic violence massacres that receive scant national attention compared to high-profile public shootings at schools, churches, and concerts in recent years. (AP Photo/Stefanie Dazio, File)

“It’s hard to imagine that you can shoot 12 people but it’s not considered a mass shooting,” Winkler said, referring to the attack Sunday at the Gilroy Garlic Festival that left three dead, not including the shooter, and 12 people wounded. That shooting is not included in the AP database.

Seven months into 2019, there have been 19 mass killings in the U.S., and all but three of them were carried out with guns.

The deadliest attack occurred May 31 at a government office in Virginia Beach, where a 40-year-old city employee walked through his office building with two .45-caliber pistols, killing 12 people before being fatally shot by police. 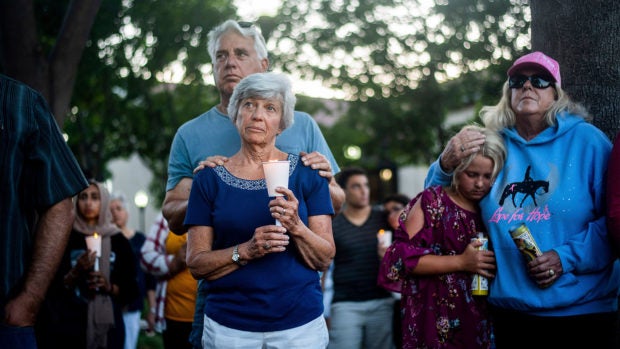 Susan Meyers and husband Michael Oshan listen to a hymn during a vigil for victims of a Sunday evening shooting that left three people dead at the Gilroy Garlic Festival, Monday, July 29, 2019, in Gilroy, Calif. (AP Photo/Noah Berger)

Many other shootings occurred under the radar.

A 26-year-old man went on a shooting spree in Southern California last week, killing his father, brother, a former girlfriend and a man at a gas station.

A man in Port Angeles, Washington, was charged with murder and arson after killing his wife and three children ages 9, 6 and 5 on July 6. He then set fire to their home.

And federal prosecutors say four suspects are responsible for the shooting deaths of five people near Yakima, Washington.

Those shootings shocked the nation especially in an era of social media and cellphone video that instantly captured the panic and mayhem.

“The ready availability of video does make mass shootings more poignant and powerful,” said Adam Winkler, a law professor at the University of California, Los Angeles. “We are much more attuned to these mass shootings. They seem more prevalent.”

Fox said the public mass shootings do not happen “all that often, but they certainly do shock us.”

“The sound of gunfire replayed over and over has an impact,” Fox said. “There hasn’t been an increase except in fear.”

MORE STORIES
Filipinos in Edmonton trying to raise $3M for a community center
Satirical play by Fil-Am on beauty, aging, cosmetic surgery, social media, selfies
Filipina nurses say why they back Sanders and ‘Medicare for All’
Don't miss out on the latest news and information.