Director Ridley Scott is back in his element with ’Alien: Covenant’

Director Ridley Scott is back in his element with ’Alien: Covenant’ 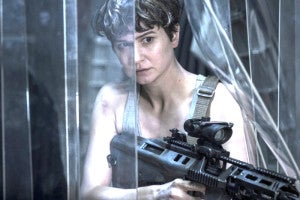 In space, no one can hear you scream. After nearly four decades, those words remain synonymous with the sheer, relentless intensity of Ridley Scott’s futuristic horror, “Alien.” Now, the father of the iconic franchise returns once more to the world he created to explore it’s darkest corners with “Alien Covenant,” a pulse-pounding new adventure that pushes the boundaries of R-rated terror.

All is quiet aboard the spaceship Covenant. The crew and the rest of the 2,000 souls aboard the pioneering vessel are deep in hyper-sleep, leaving the synthetic Walter (Michael Fassbender) to walk the corridors alone. The ship is en route to the remote planet Origae-6, where, on the far side of the galaxy, the settlers hope to establish a new outpost for humanity. The tranquility is shattered when a nearby stellar ignition shreds Covenant’s energy-collection sails, resulting in dozens of casualties and throwing the mission off course.

Soon, the surviving crew members discover what appears to be an uncharted paradise, an undisturbed Eden of cloud-capped mountains and immense, soaring trees far closer than Origae-6 and potentially just as viable as a home. What they’ve found, however, is actually a dark and deadly world full of unexpected twists and turns. Facing a terrible threat beyond their imagination, the embattled explorers must attempt a harrowing escape. Set ten years after the events depicted in “Prometheus” (2012), Scott’s “Alien Covenant” returns to the roots of the director’s groundbreaking saga with a uniquely terrifying tale filled with white-knuckle adventure and monstrous new creatures. With this, the sixth installment in the blockbuster series, Scott edges ever closer toward revealing the mysterious origins of the mother of all aliens, the lethal Xenomorph from the original film.

The film opens with a peaceful mission designed to take humanity beyond the confines of Earth into a settlement among the stars. On the manifest of Covenant are couples who will populate Origae-6, along with dozens of embryos to help establish the new colony. Charged with their protection is the ship’s crew; Captain Jacob TK (James Franco); his wife Daniels (Katherine Waterston), head of terraforming operations; second-in-command Christopher Oram (Billy Crudup); his biologist wife Karine (Carmen Ejogo); boisterous pilots Tennessee (Danny McBride) and Faris (Amy Seimetz); head of security Sergeant Lope (Demián Bichir) and his second-in-command Sergeant Hallett (Nathaniel Dean). With them is one non-human, Walter (Michael Fassbender), the Covenant’s loyal synthetic, keeping watch as the passengers remain locked away in cryosleep until they reach their destination.

This is a hard R-rated film, which is a term for film blood. If anyone knows how to terrify audiences with smart, sophisticated storytelling, it’s Scott. His original “Alien” remains a standard bearer for the horror genre, a psychologically taut, uncomfortably claustrophobic film, as lean and effective as the sleek, vicious beast that first stalked Ellen Ripley and the crew of the starship Nostromo back in 1979. The subtext is pretty basic; it’s seven people locked in the old dark house and who’s going to die first and who’s going to survive. For “Alien Covenant” Scott recaptures the same foreboding atmosphere of constant danger and dread while also offering new insights that would add richness and depth to the larger “Alien“ mythology. That approach is necessary, to keep the storytelling fresh and surprising. You can’t keep being chased down a corridor by a monster; it gets boring. You could say monsters from outer space, gods from outer space, engineers from outer space invented it. “Alien: Covenant” is going to flip that around.

“Alien: Covenant” is in a lot of ways like the first “Alien.” It’s gritty and dark, and from the get-go, when the “Covenant” hits the space storm, it sets a series of events in motion that don’t stop until the final frame. Ten minutes into the film, it becomes relentless. This is going to be the scariest one of all the films. With “Alien Covenant,” there’s no question that Scott returns to his element, crafting a bold, uniquely terrifying, visceral experience flush with the attitude and swagger of a classic Alien movie. Expect nothing less than relentless, heart-stopping, R-rated terror.  The film gets people very uneasy, helps your arteries start pumping, sets hearts pounding. You’ve a very dry throat but can’t take your eyes off the screen. To really scare the shit out of people is quite difficult, but his might give them nightmares. And that’s a good thing.