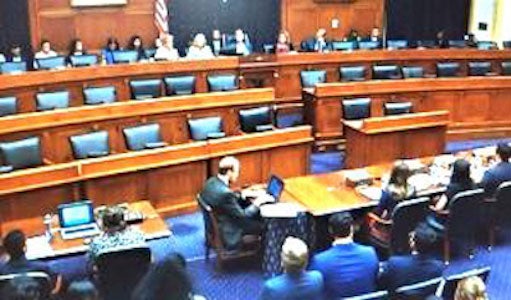 WASHINGTON, D.C. — Citing the “thousands of persons who have been killed extrajudicially by authorities pretty much at the urging of President Duterte,” House Foreign Affairs subcommittee Chairman Brad Sherman (Dem-Calif.) noted that “the Philippines has yet to hold anyone accountable for these extrajudicial killings or at least announce the policy that they are opposed to them.”

At a July 25 hearing on “Human Rights in Southeast Asia: A Regional Overview” by the House Foreign Affairs subcommittee on Asia, the Pacific and Non Proliferation, U.S. representatives and a witness from Amnesty International expressed concern that President Donald Trump himself has not spoken out against the Duterte administration’s human rights abuses.

“President Duterte has expressively embraced vigilantism and as a result thousands of people have been murdered in the hands of sanctioned-police groups,” said Rep. Gerry Connolly (Dem.-Virginia). “President Trump has a unique role in human rights advocacy, but by not speaking out he has in fact sadly encouraged Duterte and his vigilantes to persist, if not expand, their gross violations of human rights.” Rep. Abigail Anne Davis Spanberger (Dem.-Virginia) also expressed concern about the increased number of arbitrary arrests and executions. But, noting the widespread approval for Duterte’s policies among a large portion of the population, she wondered “how the United States can incentivize the Philippines to move away from these policies.”

Francisco Bencosme, Asia Pacific Advocacy Manager at Amnesty International USA, responded by saying that the “large support for the war on drugs is troubling. But that’s irrelevant because the Philippines made a commitment to observe human rights. We need to hold those responsible and condemn the killings.  Getting at the level of impunity is at the core of how we resolve this issue.” The hearing comes just two weeks after the passage of a resolution by the United Nations Human Rights Council during its 41st session in Geneva to investigate and produce a comprehensive country report on the Philippines by 2020. It comes at the behest of advocates, targets and survivors of human rights atrocities committed under the administration of President Duterte.

In his testimony as one of the witnesses, Bencosme mentioned the anti-drug operation that recently killed 3-year-old Myca Ulpina, “the latest casualty of Duterte’s war on drugs.” Bencosme pointed out that to date, of the thousands of executions carried out over the past three years, only one case of extrajudicial killing has been brought to justice, resulting in the conviction of three police officers who murdered 17-year-old Kian delos Santos in August 2017. Bencosme also testified on the “climate of attacks” on journalists and human rights defenders, notably Senator Leila de Lima, who has been in jail for three years on politically motivated charges; Rappler publisher Maria Ressa for relentless reporting of killings and human rights abuses; and Karapatan activists Ryan Hubilla and Nelly Bagasala, who were killed in June by unidentified gunmen in Sorsogon City.

More recently, Bencosme reported, the Philippine National Police has filed sedition and related complaints against 36 high-profile individuals, including Vice President Leni Robredo, for allegedly “spreading lies” that the President and his family are involved in the illegal drug trade.

“Despite international condemnation, the Duterte administration remains defiant,” warning that the second half of his term “will only be harsher,” Bencosme said, adding that these government-orchestrated attacks against poor people suspected of drugs “may amount to crimes against humanity.” At the end of the two-hour hearing, the Chairman repeated his earlier statement to “ramp up our engagement with the Philippines” and ensure that a major non-NATO ally, which receives $150 million foreign aid annually, upholds basic human rights.

Before the hearing started, Sherman acknowledged the presence of Beverly L. Longid, coordinator of Indigenous Peoples Movement for Self-Determination and Liberation (IPMSDL) of the Philippines. “The Philippines must also uphold the rights of indigenous people,” Sherman said. He commended Longid for her longstanding advocacy and work with the United Nations on behalf of indigenous peoples.

Although Longid did not testify, Rep. Ann Wagner (GOP-Missouri) brought up the plight of indigenous people under martial law in Mindanao and the constant harassment of human rights defenders and attacks on their schools. To her concern about protecting them, Bencosme emphasized the need for the U.S. to use its leverage in strengthening human rights protections.

“The hardliners who loom large in this region are set to continue abusing rights and shattering human lives without consequences,” he concluded. “The world is watching to see whether and how the United States promotes universal rights abroad. Failure to do so will undermine the United States’ credibility and its ability to demonstrate leadership.”