Lea Salonga reaches a new peak at Feinstein’s/54 Below

Lea Salonga reaches a new peak at Feinstein’s/54 Below 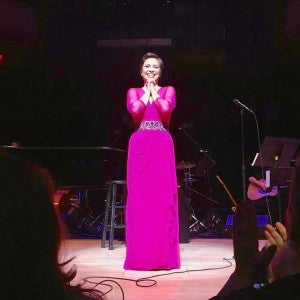 NEW YORK—Lea Salonga is back in the Big Apple this month for a record-breaking 15 performances at Feinstein’s/54 Below. Running from May 9 to 22, this will be the longest continuous engagement in cabaret history.

“It always feels fantastic to come back to New York to perform, whether it’s a Broadway show or an intimate cabaret,” Salonga told INQUIRER.net.

Described as “one of the year’s most satisfying cabaret shows” by The New York Times, the show is an encore from last year that would include the Broadway diva’s favorite standards, pop tunes and Broadway ballads.

The Philippines’ pride, who released a live album called “Blurred Lines” on May 5, talks to INQUIRER about her show and more, here:

How does it feel to be coming back to New York and doing a concert while the “Miss Saigon” revival is also playing literally a block away from your venue? Do you feel nostalgic?

“It always feels fantastic to come back to New York to perform, whether it’s a Broadway show or an intimate cabaret. It never gets old. It’s also great that I’ll be a stone’s throw away from my old home, the Broadway. I don’t know about nostalgic, but it does feel wonderful to be in close proximity.”

You’re breaking a record by doing 15 performances at Feinstein’s. What is your motivation?

“For the same reason people climb Mount Everest—because it’s there. Right now, the record belongs to Patti LuPone. So, my motivation? Because Patti’s there.”

We know that New York is your second home; what do you look forward to doing this year? Anything unusual, something that you haven’t done in the past?

“Is there such a thing as unusual in New York City? And no, nothing’s planned that’s different. I won’t be walking any tightropes anytime soon.”

Tell us about this concert, what can Lea diehards expect?

“It’s a repeat engagement, so it’ll be the exact same concert we did last year at Feinstein’s/54 Below. Same songs, same pattern—more or less. Even the same red pantsuit.”

“Nothing actually, I like it quiet before I go to bed. But I do like some Erykah Badu or India Arie to relax.”

You’re widely known to be original. Do you ever get inspiration from other singers?

“I listen to a lot of people, and steal liberally from them. How one singer does a riff will be different from how I will, even if note for note, on paper, it’s exactly the same riff.”

Name three singers who’ve had the most influence on your Broadway/singing career.

“Karen Carpenter, Olivia Newton-John, Ella Fitzgerald, Julie Andrews, and many others whose names escape me now. Oh, and ABBA, for their signature clarity.”

Salonga’s upcoming concert performances will take place at Feinstein’s/54 Below, 254 West 54th Street, Manhattan. Tickets cost $95–$190, plus a $25 food and beverage minimum. Doors open at 5:15 p.m. for the concerts, which begin at 7 p.m.. Tickets and more information are available at 54below.com.