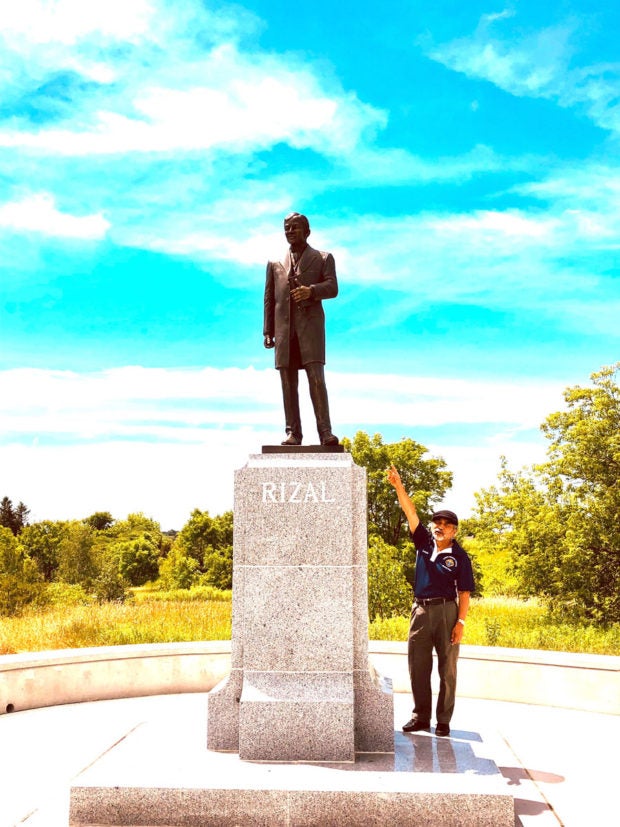 Sculptor Ignacio “Mogi” Mogado provides scale to height of the monument he created.  Park and around monument will have picnic and play areas. INQUIRER/Marisa Roque

MARKHAM, Ontario — To mark the very first Filipino Heritage month on June 2019, the city of Markham

Made of half-inch thick bronze cast over a base of molded plaster of paris, the statue rests on a plinth of top grade granite.  The monument, located in Boxgrove Community Park, has Rizal positioned just across the street where Rizal Avenue begins.  Ignacio “Mogi” Mogado Jr., the sculptor, said “Rizal Avenue is the longest residential street in the area.”

“The statue too is perfectly positioned with Rizal directly looking east at the sunrise…recalling his words in Noli Me Tangere– ‘I die without seeing the dawn of my native land’…you who are left behind remember those who have fallen during the night’,” Mogado adds. 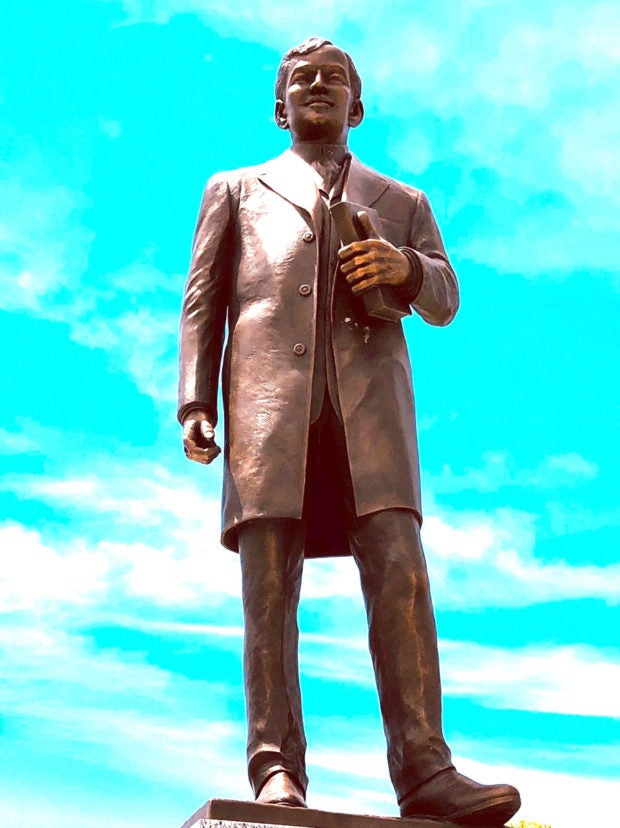 Queried on how the monument and park came to be, Mogado credits “Filipino pride and the patriotic spirit, strong in every kababayan, the force that drives our causes and events as a community. By the late ‘80s, we organized Markham Federation of Filipino Canadians (MFFC), acquired a community center, started celebrating Filipino heritage, held Independence Day flag-raising and community picnics, participated in elections.”

Mogado continues: “With Alex Chiu (born and raised in Baliuag, Bulacan) elected as (Markham) councillor in 1985, we had a foothold in the process of putting Philippine landmarks on the Markham map.”

Chiu got a street named in honor of Dr. Jose Rizal [Rizal Avenue], then Manila Avenue. “We aspired to have a Rizal monument, but it was daunting financially, and the political climate was not yet suitable. In a few more years Councillor Chiu became good at fundraising, and my sculpturing skills got better. Between the two of us, our common dream of a Rizal project inched closer to reality every time we got together, (until it) was finally unstoppable. So, in 2014 we agreed he would look after the approval and funding, while I would take care of the sales pitch and statue.” 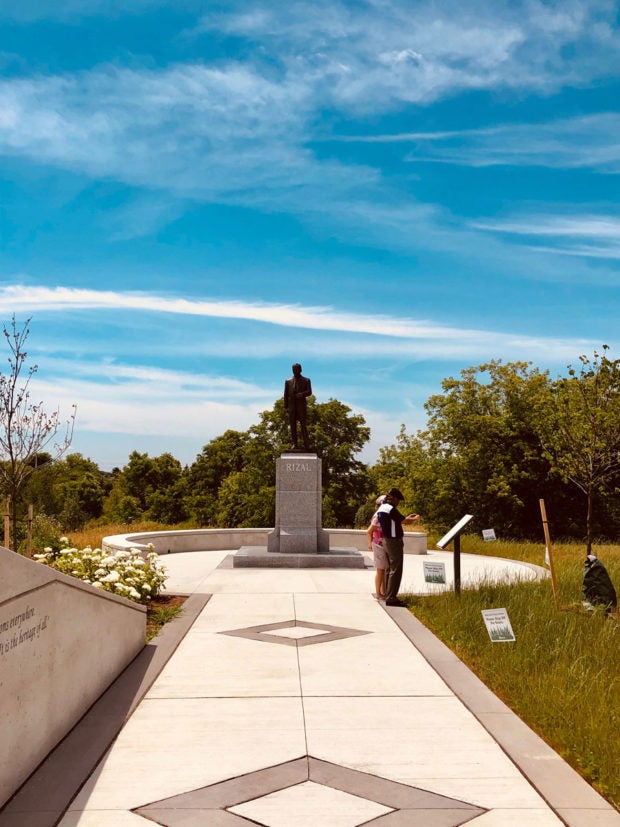 At its unveiling, the Rizal monument was turned over to the city of Markham on June 12, 2019. INQUIRER/Marisa Roque

As fate would have it, Markham Mayor Frank Scarpitti, on a trade mission in Manila, was astounded to see a Rizal monument in every community; then the grand monument at Rizal Park, and how much the people loved Rizal. “He came back with a big plan, he said he would not want anything less than a life size statue in a fabulous park that will be prominent and topnotch in Canada,” Mogado points out.

“This meant doubling up the cost, and sculpting a new life size version.  At the Philippine Independence Day program in 2016 Mayor Scarpitti made the surprise announcement that by (2017) we will have our Rizal monument in Boxgrove Community Park in Markham. It will be the Filipino Canadian community’s gift to Canada for its 150th anniversary celebrations [2017] and the newest addition to Markham’s public art collection,” relates Mogado.

Ground-breaking for the monument was held in 2017, but the unveiling had to wait till 2019.

“Given the confluence of favorable events (the monument) was an easy pitch to Markham officials. Rizal was a hot item by his reputation of being honored with statues already in every community in the Philippines and with just under 100 in various other countries. The three that Canada has [in Montreal, Winnipeg and Toronto] are bust statues and would pale in comparison to Markham’s,” explains Mogado.

Asked why Rizal was chosen to represent the Filipino Canadian community in the Canadian setting, Mogado offers the following reasons: “Through his writings (and) advocating for peaceful reforms, Rizal inspired the revolution ending Spain’s colonial stranglehold in the Philippines.” Mogado muses–“In the Canadian context (Rizal’s) ideal of a society where democracy, equality, brotherhood of man, respect and dignity for the individual are norms, conforms to Canadian values and support the policy of multiculturalism, (such) values (are) exemplified in Markham’s communities, living harmoniously together amidst their diversity.”

“(Rizal) is a good symbol worth emulating. Mayor Scarpitti remarked that Luneta Gardens and the Rizal Monument may well evolve to be Canada’s ‘diversity park’…,” shares Mogado.

Mogi Mogado, originally from Pamplona, Cagayan, was valedictorian in elementary and high school, and topped the UP entrance exams for Cagayan Valley in 1961.  He earned a BA in Public Administration from the University of the Philippines in 1965, completed up to second year studies at UP College of Law, then moved to Toronto in 1973.

Mogado did not have training in the fine arts, but is self-taught.  He paints, sketches, and sculpts.  The quality of his art is such that “…they (Markham officials) are happy they have a ‘great sculptor’ in their midst (as Mogi and his family have been Markham residents since 1980.)  They were impressed by my…works…including a bust of former Markham Mayor Don Cousens, and by my being a past president of the Philippine Artists Group of Canada,” he adds.

Mogi is married to Marlene, a now-retired three-term trustee for the York Catholic District School Board for Markham.  Their only daughter,  Linelle, is a human rights and labor lawyer based in Los Angeles working for Service Employees International Union, California’s largest union.

MOST READ
entertainment LOOK: Janine Gutierrez flaunts bikini body in Palawan
newsinfo Duterte pardons outstanding punishments of PMA cadets
newsinfo ACT-CIS still leads party list race getting over 5% of votes; 1-Rider, Tingog next
entertainment WATCH: Bea Alonzo fulfills dream of owning apartment in Europe
newsinfo ‘Vote-buying’ spree drives mobile phone sales
newsinfo Romualdez: No more politics, time to work for the Filipino
opinion A Marcos government and the pink movement
DID YOU KNOW?
The 12 Best Lat Exercises for Muscle Growth
Countdown to summer: tips for learning how to surf
User Guide: How to Track a Lost iPhone
The Best Filipino Food to Try When Visiting the Philippines
Water Filter Pitcher: The secret to having clean water at home
Top 15 Most Beautiful Flowers in the World