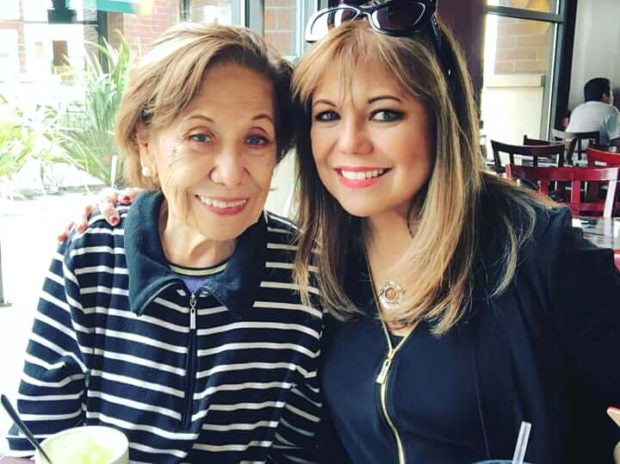 SAN FRANCISCO — Whenever former classmates get together many decades after their college graduation, they turn to Rose Ysip Capistrano-Rokicki to lead grace before and after a meal, and a prayer of gratitude and godspeed before they part.

Rokicki picked up the devotion from her mother Lily Villanueva Ysip, whose life revolved around family and church.  Profound faith was only one of the many values Rose inherited from her mother, who founded Dayspring Foundation, which helps underfunded pastors from the Northern Mountain Provinces of Benguet through the Southern tribes of Zambales and Cotabato  areas.

Art appreciation is another.  After over 30 years in the corporate arena, Capistrano – Rokicki (Ro-kit-ski) has embraced a new medium of expression. 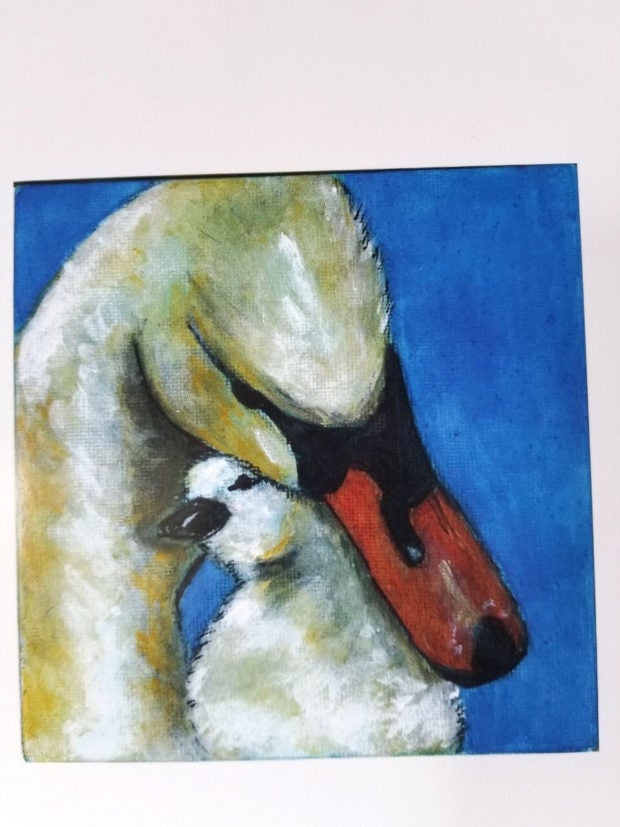 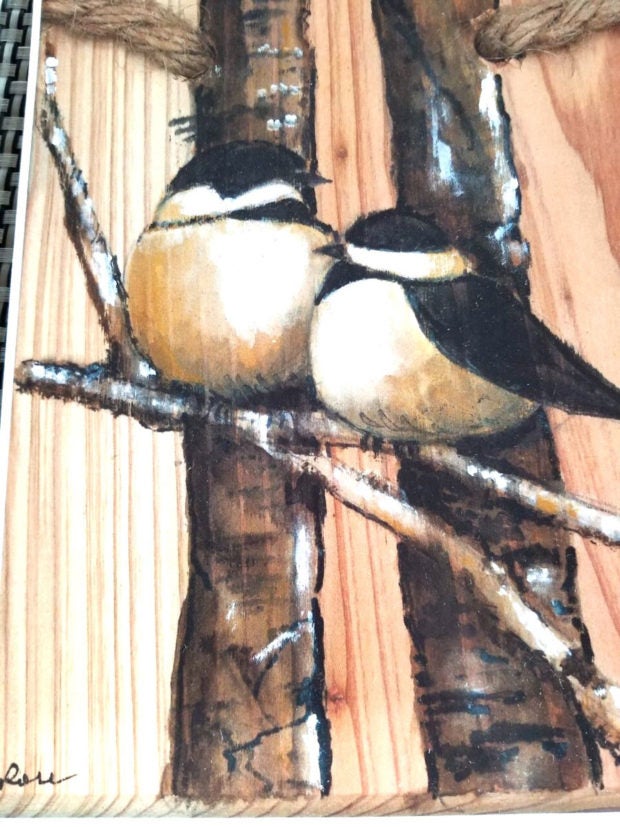 In her grief, Rose Ysip Capistrano-Rokicki found refuge is art and painted a collection that reflects her deep faith to be exhibited at the Franklin Library in Elk Grove, Northern Califonia. CONTRIBUTED

On September 28, images of mother and child, tropical blossoms, majestic stone arches and ethereal landscapes seared in her mind and replicated by her hand will star in an exhibit at the Franklin Library in the Elk Grove suburb of Sacramento.  Her collection showcases what Rokicki defines as “healing art” for it cured the ache she thought she would have to endure the rest of her life.

The show solidifies Capistrano-Rocicki’s identity as an artist and her mother’s daughter.

“My mother was a woman of faith.  She was gracious, soft-spoken and full of wisdom.  She cared about the unfortunate,” Rose highlights the qualities she remembers most about the woman in whose steps she follows.

The fourth of Lily and Bonifacio Ysip’s 11 children, Rose looked up to her mother as the paragon of womanhood.  Called “Mommy Lily” for her maternal bearing, Mrs. Ysip raised her big brood with the help of trusted household crew that enabled her to serve the church and share her blessings with strangers. 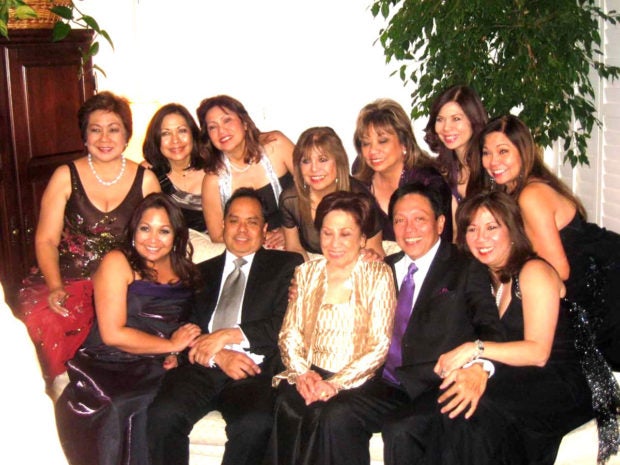 “I remember one time when she allowed that our driveway gates be opened to welcome several blind, crippled and indigent people who said they had heard voices of praise and worship from a distance which led them to our home.  A prayer meeting was held at our home that evening,” Capistrano-Rokicki recalls one of her mother’s many acts of kindness.

Mommy Lily balanced duty with self-care.  She enjoyed a round or two of golf as much she fancied painting nature, her favorite subject.  Occasionally she would travel with her husband who was a special envoy to Washington DC in charge of the anti-smuggling campaign of the Marcos administration.

Capistrano-Rokicki describes her father as “a man of integrity and faith” whom she dearly loved and respected.

“God was the center of our home,” she says, remembering Jesuit priests and Belgian nuns among frequent guests at their residence in Blue Ridge, Quezon City.  Her spiritual discernment occurred naturally, having attended Catholic schools that required morning prayer along with service and compassion. 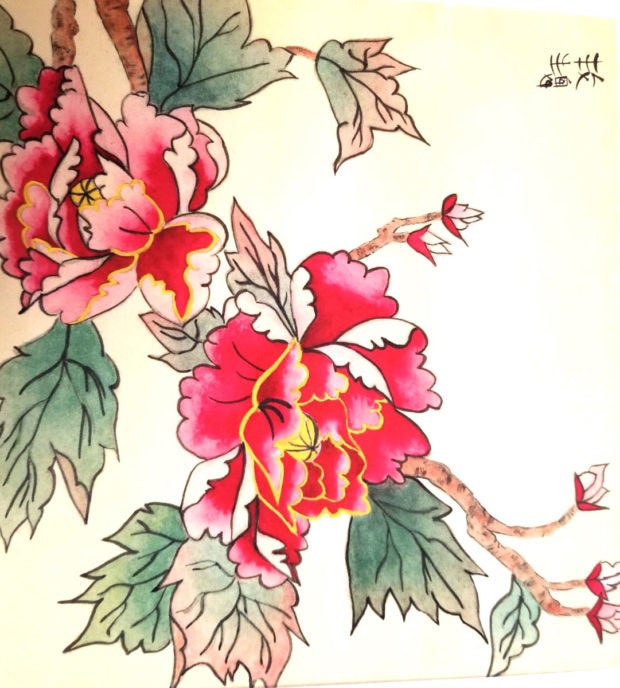 Mommy Lily’s innate talent showed in her paintings of her favorite subject – flowers, like these amaryllis blossoms. CONTRIBUTED

“During my college years, I knew that there was something more than memorizing lessons from my Catechism and Theology subjects,” she told INQUIRER.NET.  “Even after my several visits with a team that traveled to Tala leprosarium in a remote area in the Philippines, the experience still left me empty. Being faced with people afflicted with this disease and helping raise funds to improve their water system somehow left me with questions.”

That inquisitiveness took the back seat to teen distractions and other interests, like Chinese brush painting lessons that she did not realize would one day be a lifeline.  Plus, a career on an upward trajectory.

Armed with her Business Administration degree from Maryknoll College, Rose worked in banking in Manila for a few years before heading to the United States in 1980 to join her siblings who by then were living in the San Francisco Bay Area. She moved on to Chicago where a hotel job beckoned, and there she built a career that peaked with her appointment to corporate sales manager for Wyndham Suites Hotel.

She has the grace and elegance of her mother, balanced by traits she developed growing up with 8 sisters and 2 brothers that contributed to her professional success.

“Coming from a large family taught me to speak up loud and be heard among 10 different personalities daily. Competition existed among the siblings and it taught me to accept my strengths and weaknesses,” she said, adding that being a part of “the Eleven” also taught her to “respect, forgive and love each sibling.”

Those values buoyed her when her first marriage ended, turning her ex into a friend and co-parent to their son and daughter.  She did not close herself to commitment and found love again in Michael Rokicki, a colleague with whom she had more in common than she allowed herself to know earlier.  They decided to retire recently and return to California where winter is kinder.

Last year was tumultuous for Capistrano-Rokicki when her mother, a vibrant 96 and her spiritual guide, died from a stroke, the same malady that took her father more than 30 years prior. Rose Rokicki never imagined while studying Chinese brush painting over 40 years ago that her paintings would be exhibited in the United States.  Meili de Hua is her signature in Chinese. CONTRIBUTED

Mommy Lily’s absence left her children bereft.  Rose called the health decline and eventual demise of her mother a time of “difficulty and sorrow” that called her closer to her faith.  She found refuge in her husband, daughter Lia of Chicago and son Paolo, a quality engineer and fellow resident of the Bay Area.

In her grief Rose turned to a set of paints and brush that Paolo had gifted her for Christmas.  Painting salved her heartache. Alone in her loft, dabbing brush to acrylic to form images while listening to Christian music transported her to different worlds where her subjects came to life.  She internalized the affection between figures born on her canvas: a Hmong mother and child, a swan and her cygnet, peony buds among full blossoms, inanimate objects caressed by sunshine – an ode to the greatness from beyond.

“Every sorrow and grief is someone’s hope and comfort when we put our trust in God,” she said of her “journey” toward healing.  Picking up a brush and transforming a blank canvas into a celebration of color is as close she gets to touching her beloved mother.

Those images will be in full view at the September library show and then in a feature produced by Jeanne de Laney  called Art of the Matter, a clinical documentary on Access Sacramento Channel 17 and 18 .

Every work is a tribute to her mother and, being a born-again Christian, manifestation, she says of her “acceptance of Jesus Christ as my personal Savior.”