Apollo 11 astronaut Michael Collins returned Tuesday to the exact spot where he flew with Neil Armstrong and Buzz Aldrin to celebrate the 50 Year Moon Landing Anniversary.

Collins had the spotlight to himself this time — Armstrong has been gone for seven years and Aldrin canceled. Collins said he wished his two moonwalking colleagues could have shared the moment at Kennedy Space Center’s Launch Complex 39A, the departure point for humanity’s first moon landing. 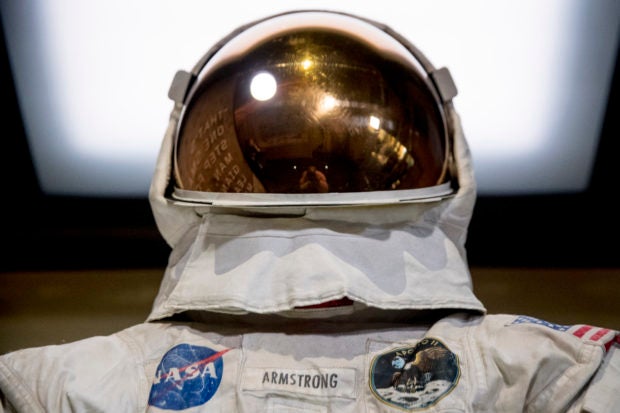 “Wonderful feeling to be back,” the 88-year-old command module pilot said on NASA TV. “There’s a difference this time. I want to turn and ask Neil a question and maybe tell Buzz Aldrin something, and of course, I’m here by myself.”

At NASA’s invitation, Collins marked the precise moment — 9:32 a.m. on July 16, 1969 — that the Saturn V rocket blasted off. He was seated at the base of the pad alongside Kennedy’s director, Robert Cabana, a former space shuttle commander.

Collins recalled the tension surrounding the crew that day.

“Apollo 11 … was serious business. We, crew, felt the weight of the world on our shoulders. We knew that everyone would be looking at us, friend or foe, and we wanted to do the best we possibly could,” he said. 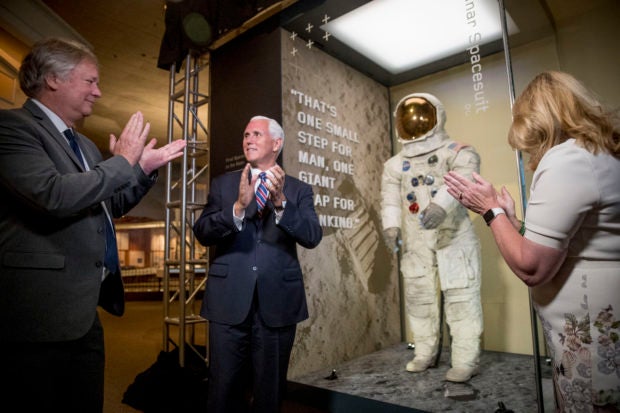 Collins remained in lunar orbit, tending to Columbia, the mother ship, while Armstrong and Aldrin landed in the Eagle on July 20, 1969, and spent 2 ½ hours walking the gray, dusty lunar surface.

A reunion Tuesday at the Kennedy firing room by past and present launch controllers — and Collins’ return to the pad, now leased to SpaceX — kicked off a week of celebrations marking each day of Apollo 11’s eight-day voyage. 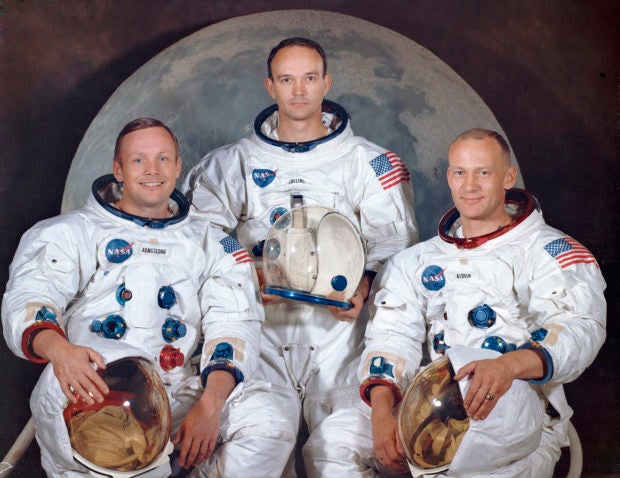 This March 30, 1969 photo made available by NASA shows the crew of the Apollo 11, from left, Neil Armstrong, commander; Michael Collins, module pilot; Edwin E. “Buzz” Aldrin, lunar module pilot. Apollo 11 was the first manned mission to the surface of the moon. (NASA via AP)

In Huntsville, Alabama, where the Saturn V was developed, some 4,900 model rockets lifted off simultaneously, commemorating the moment the Apollo 11 crew blasted off for the moon. More than 1,000 youngsters attending Space Camp counted down … “5, 4, 3, 2, 1!” — and cheered as the red, white and blue rockets created a gray cloud, at least for a few moments, in the sky.

The U.S. Space and Rocket Center was shooting for an altitude of at least 100 feet (30 meters) in order to set a new Guinness Book of World Records. Apollo 15 astronaut Al Worden helped with the mass launching. Also present: all three children of German-born rocket genius Wernher von Braun, who masterminded the Saturn V. 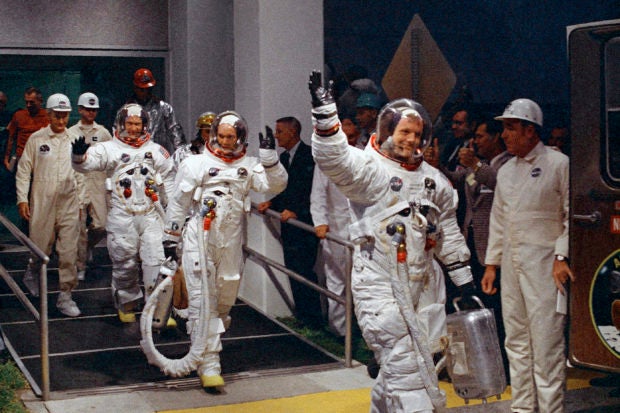 FILE – In this July 16, 1969 file photo, from right, Neil Armstrong, Michael Collins and Buzz Aldrin walk to the van that will take the crew to the launchpad at Kennedy Space Center on Merritt Island, Florida. (AP Photo/File)

“This was a blast. This was an absolute blast,” said spectator Scott Hayek of Ellicott City, Maryland. “And, you know, what a tribute – and, a visceral tribute – to see the rockets going off.”

Another spectator, Karin Wise, of Jonesboro, Georgia, was 19 during Apollo 11 and recalled being glued to TV coverage.

“So, to bring my grandchildren here for the 50 anniversary was so special,” she said. “I hope they’re around for the 100th anniversary.”

At the Smithsonian’s Air and Space Museum in Washington, the spacesuit that Armstrong wore went back on display in mint condition, complete with lunar dust left on the suit’s knees, thighs and elbows. On hand for the unveiling were Vice President Mike Pence, NASA Administrator Jim Bridenstine and Armstrong’s older son, Rick. Armstrong died in 2012.

A fundraising campaign took just five days to raise the $500,000 needed for the restoration. It was taken off display 13 years ago because it was deteriorating, said museum curator Cathleen Lewis. It took four years to rehab it. 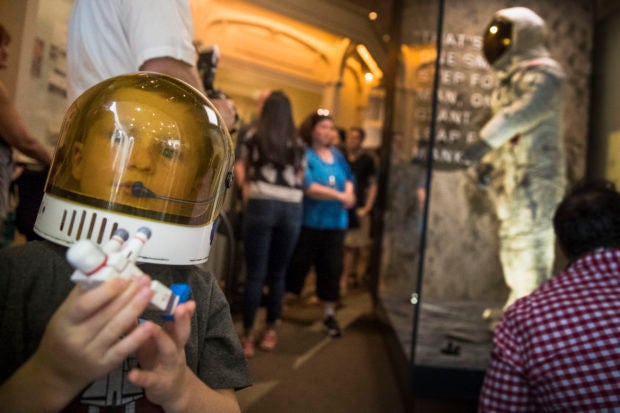 Jack Heely, 5, of Alexandria, Va., wears a toy space helmet as he arrives as one of the first visitors to view Neil Armstrong’s Apollo 11 spacesuit, background, after it is unveiled at the Smithsonian’s National Air and Space Museum on the National Mall in Washington, Tuesday, July 16, 2019. (AP Photo/Andrew Harnik)

Calling Armstrong a hero, Pence said: “the American people express their gratitude by preserving this symbol of courage.”

Back at Kennedy, NASA televised the original launch video of Apollo 11, timed down to the second. Then Cabana turned his conversation with Collins to NASA’s next moonshot program, Artemis, named after the twin sister of Greek mythology’s Apollo. It seeks to put the first woman and next man on the lunar surface — the moon’s south pole — by 2024. President John F. Kennedy’s challenge to put a man on the moon by the end of 1969 took eight years to achieve.

Collins said he likes the name Artemis and, even more, likes the concept behind Artemis.

“But I don’t want to go back to the moon,” Collins told Cabana. “I want to go direct to Mars. I call it the JFK Mars Express.” 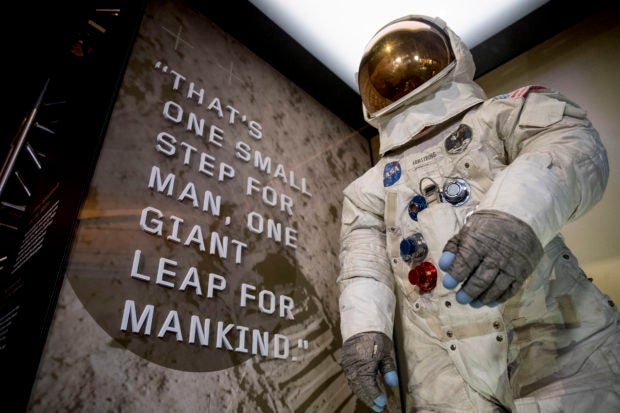 Collins noted that the moon-first crowd has merit to its argument and he pointed out Armstrong himself was among those who believed returning to the moon “would assist us mightily in our attempt to go to Mars.”

About 100 of the original 500 launch controllers and managers on July 16, 1969, reunited in the firing room on Tuesday morning. The crowd also included members of NASA’s next moon management team, including Charlie Blackwell-Thompson, launch director for the still-in-development Space Launch System moon rocket. The SLS will surpass the Saturn V, the world’s most powerful rocket to fly to date.

Blackwell-Thompson said she got goosebumps listening to the replay of the Apollo 11 countdown. Hearing Collins’ “personal account of what that was like was absolutely amazing.” 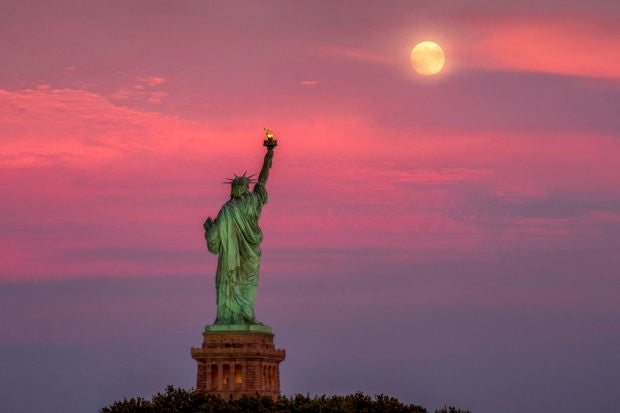 The full moon rises behind the Statue of Liberty at sunset in New York City, Monday, July 15, 2019, on the night before the 50th anniversary of the Apollo 11 moon launch. (AP Photo/J. David Ake)

The lone female launch controller for Apollo 11, JoAnn Morgan, enjoyed seeing the much updated- firing room. One thing was notably missing, though: stacks of paper. “We could have walked to the moon on the paper,” Morgan said.

Collins was reunited later Tuesday with two other Apollo astronauts at an evening gala at Kennedy, including Apollo 16 moonwalker Charlie Duke, who was the capsule communicator in Mission Control for the Apollo 11 moon landing. Only four of the 12 moonwalkers from 1969 through 1972 are still alive: Aldrin, Duke, Apollo 15’s David Scott, and Apollo 17’s Harrison Schmitt.

Huntsville’s rocket center also had a special anniversary dinner Tuesday night, with some retired Apollo and Skylab astronauts and rocket scientists. Aldrin was set to attend but was traveling Tuesday and likely wouldn’t make it on time, a center official said.

NASA spokesman Bob Jacobs said Aldrin bowed out of the Florida launch pad visit, citing his intense schedule of appearances. Aldrin and Collins may reunite in Washington on Friday or Saturday, the 50th anniversary of Apollo 11’s moon landing.

LATEST
Locked up: No masks, sanitizer as virus spreads behind bars
US hotspots grow as virus cases surpass 620,000 globally
John Turturro on his ‘Plot Against America’ and ‘The Batman’
Theater actor charges ‘close encounter with predator’ to experience
McCoy bares devastating effect of failed romance with Elisse
MOST READ
usa Fil-Ams braving frontlines against coronavirus
usa PH-born Filipina is state of Washington’s top adviser on COVID-19
usa Priests as COVID-19 frontliners
usa A day in the life, in the Age of COVID-19, Part 1
usa The power of lying
usa How we’re are coping with the pandemic across the globe
usa Loss of smell, taste, might signal pandemic virus infection