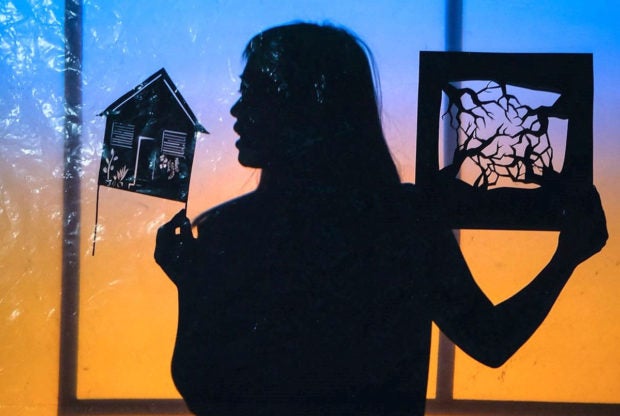 SAN FRANCISCO — The spotlight illuminates Filipino domestic workers based in the U.S. in the 45-minute production “Sigaw: A Shadowplay.”

“Sigaw” follows the journey of Marissa from a young girl in a Philippine province to being a domestic worker in the United States. She confronts a life of hard labor, oppression, isolation and abuse—finding comfort only in the children she’s helping to raise.

Staged by Bindlestiff Studio, the play is written and directed by the organization’s artistic director Aureen Almario.

Her impetus for creating “Sigaw” was the life of Eudocia Tomas Pulido, who had been written about by Pulitzer Prize winning journalist Alex Tizon in The Atlantic magazine in 2017.

Tizon had described Pulido as a woman who lived with his family for 56 years, raised him and his siblings for no pay and was “a slave in my family’s household.”

“We are part of a group called Brownout Shadow Collective,” says Almario. “We were trained by previous Bindlestiff Studio artistic director Lorna Velasco, who was trained by Larry Reed of Shadowlight Productions.”

The puppets will be mainly made of paper and transparency sheets. “We are also using glass, mirror and other props for special effects.”

Almario’s interest in shadow puppetry stems all the way back to her college days at San Francisco State University.

“I was taking an Asian American Community Arts Workshop under Allyson Tintiangco-Cubales, who had partnered with several Bindlestiff artists.” Among other workshops, Almario took shadow puppetry under Velasco and even became a shadow actor in Velasco’s shadow play “Lakbay.”

And through the show, she met the late Don Salubayba. The visual artist and cofounder of Manila-based shadow puppetry group Anino Collective had been in San Francisco on an artist residency.

“While I learned the Shadowlight style from Lorna, Don showed me the Anino style of shadow puppetry.” Puppeteers and puppet designers of “Sigaw: A Shadowplay” hold up their puppets. PACIANO TRIUNFO

Almario went on to work on other shadow plays such as “The Movement,” “Engkanto,” “Series of Seriesed Events.” In 2015, she joined Lorna Velasco in the cast of the touring production of the shadow play “Feathers of Fire.”

When Almario began writing “Sigaw,” she grappled with her own personal experiences with domestic workers.

“I grew up with yayas when I lived in the Philippines until I was 10 years old. The practice of having katulongs is so deeply embedded in Filipino culture. As a person who has also worked in the childcare industry, it’s always been a topic that is personal for me.”

“I was particularly interested in deconstructing the notion that ‘Filipinas are innately nurturing and caring.

“I wondered where the lines are drawn between love and labor, especially when they are so intimately connected. Particularly in situations where you have a yaya or nanny raise you up until your adulthood, which was the case with Alex Tizon.”

She also observed that mass media was providing audiences a one-sided viewpoint of domestic workers. “With Alex Tizon and the critically acclaimed film ‘Roma,’ both narratives are told from men’s perspectives—men who were raised by their live-in domestic workers.”

“There’s definitely a class and even racial divide; the indigenous and poor women alleviate the more privileged class women from child-rearing and domestic work.

“I was interested in them as a human being with hopes and dreams, not just a story that about the exploitative nature of domestic work—What was their childhood like? How was it for them to cope with the shift in their role when the children become adults, and their purpose has changed. How did they advocate for themselves?”

She adds, “I was also especially concerned about the topic of mental health as these women are separated from their families and are isolated.”

“The story is fictional,” says Almario of her shadow play. Nevertheless, “Marissa is a composite character of the narratives, articles and interviews I’ve compiled of current domestic workers today to understand their complex and varied experiences.”