Why San Francisco is a sanctuary city

Why San Francisco is a sanctuary city 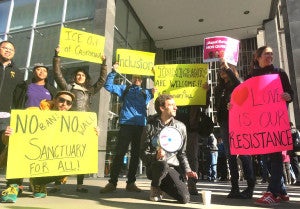 Many of our Filipino students, like others from Central and South America, Europe, Africa and Asia, are out of status or “undocumented aliens” (TNTs) but our job at City College is not to police their immigration status but to educate them and provide them with the knowledge and skills to get a job and provide a decent living for themselves and their families.

We have undocumented students who are dreamers, so named for the acronym of the bill (Development, Relief and Education of Alien Minors Act) that would have granted them permanent residence if it had passed Congress. It passed the House on December 8, 2010 by a vote of 216-198 and the Senate by a vote of 52-44 but Republicans required the senate bill to garner 60 votes to pass without a Republican filibuster.

Pres. Obama signed an executive order in 2012 called the Deferred Action on Childhood Arrivals (DACA) granting dreamers the right to obtain work permits for two year periods. The order has not yet been revoked by  Pres. Trump so over 900,000  applicants (including Filipino TNTs) have been able to still go to school and work legally.

San Francisco was perhaps the first in the U.S. to become a sanctuary city when it passed the “City and County of Refuge” Ordinance in 1989 prohibiting City employees from using City funds or resources to assist Immigration and Customs Enforcement (ICE) in the enforcement of federal immigration law.

In 2013, San Francisco passed the “Due Process for All” Ordinance prohibiting its law enforcement officers from cooperating with ICE detainer requests, sometimes referred to as “ICE holds”, or from inquiring about a person’s immigration status when applying for City benefits, services or opportunities.

San Francisco passed our Sanctuary Ordinance “to promote public trust and cooperation” and to “help keep our communities safe by making sure that all residents, regardless of immigration status, feel comfortable calling the Police and Fire Departments during emergencies and cooperating with City agencies during public safety situations.” 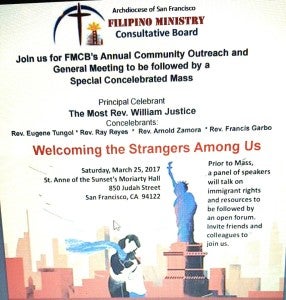 The importance of this ordinance was supported by the recent report of the chief of police of Los Angeles that there was a 25% drop in reports of rape and domestic violence among Latinos in his city since the beginning of 2017. This is a worrisome statistic in a city that is populated by an estimated one million undocumented immigrants since the drop can only be attributed to President Donald Trump’s aggressive enforcement of deportation against those out of status or without documentation.

“Imagine a young woman—imagine your daughter, sister, mother, your friend—not reporting a sexual assault because they are afraid that their family will be torn apart,” Police Chief Charlie Beck said in a press conference with Los Angeles Mayor Eric Garcetti.

“We have entire communities of people feeling like it’s no longer safe or feasible for them to report crime,” said Jacquie Marroquin, director of programs for the California Partnership to End Domestic Violence.

“Domestic violence, sexual violence, abuse exist in the shadows,” Marroquin added. “When folks don’t feel like they can come forward and bring these issues into the light, it forces them to remain in harmful situations.”

This concern compelled Los Angeles to join San Francisco and now about 39 cities and 364 counties throughout the U.S. which have adopted sanctuary policies.

Rodel Rodis speaking at “Welcoming the Stranger” immigration forum sponsored by the Filipino Ministry of the San Francisco Archdiocese.EDNA CASTEEL

In court filings, Herrera argued that Pres. Trump was attempting to “bully” cities and counties by threatening to withhold funds for programs that provide meals and medical care for seniors and low-income families. He said the city stands to lose $1.2 billion in federal funds, mostly for entitlement programs for the poor.

“These entitlement programs are not the president’s to take away from those in need, and San Francisco is not one to back down from a bully,” Herrera said.

Herrera’s motion asked the court to bar Trump from withholding funds and to rule that San Francisco’s sanctuary policies comply with federal law.

While San Francisco may be divided on many issues, it is united on this one.

Migrants must be welcomed with dignity

The acknowledged leader of San Francisco’s conservatives is Catholic Archbishop Salvatore Cordileone who is a national leader in the Pro-Life Movement protesting abortion. But when Trump announced his anti-sanctuary executive order in January, Cordileone declared that he is troubled by the actions Trump has taken on immigration and declared that the Catholic Church will ensure that immigrants “know their rights” and will be “protected.” 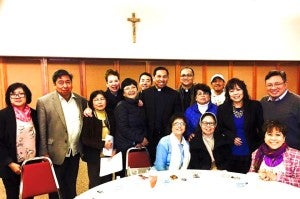 In its website, the San Francisco Catholic archdiocese expressed its belief that “migrants must be welcomed with dignity and respect – as if we were greeting Christ himself.  Migrants leave their home countries for a variety of reasons, with many escaping life-threatening war zones and extreme poverty.  In the United States, and throughout the world, the Church devotes both pastoral and material assistance to “welcome the stranger.”

On March 25, 2017, I spoke at a “Welcoming the Strangers Among Us” immigration forum sponsored by the Filipino Ministry of the San Francisco Archdiocese which was held to educate the Filipino community about how we can help “illegal immigrants”. I explained the rights of people confronted by immigration agents to ask for a search warrant and to assert their right to remain silent and to seek the services of an immigration attorney.

The immigration forum was held at the St. Anne of the Sunset Church in San Francisco hosted by Archbishop William Justice and Filipino priests led by Vicar for the Filipino community Fr. Eugene Tongol along with Fr. Ray Reyes, Fr. Arnold Zamora, and Fr. Francis Garbo.

Other speakers included Cecile Ascalon, Executive Director of the Pilipino Senior Resource Center, and Lorena Melgarejo, Coordinator of the Parish Organizing & Leadership Development of the Archdiocese of San Francisco. The common message was this: “We are one human family whatever our national, racial, ethnic, economic, and ideological differences. We are our brothers’ and sisters’ keepers, wherever they may be.”

“Welcoming the Stranger” immigration forum was held at the St. Anne of the Sunset Church in San Francisco hosted by Archbishop William Justice and Filipino priests led by Vicar for the Filipino community Fr. Eugene Tongol along with Fr. Ray Reyes, Fr. Arnold Zamora, and Fr. Francis Garbo. INQUIRER/Rodel Rodis

On April 25, 2017, Federal Judge William Orrick issued an order temporarily blocking President Trump’s efforts to starve localities of federal funds when they limit their cooperation with immigration enforcement. He wrote that Trump had overstepped his powers by tying billions of dollars in federal funding to immigration enforcement. Only Congress could place such conditions on spending, Judge Orrick wrote.

At the “welcoming the stranger” concelebrated mass on March 25, the priests explained the biblical reference of the title of the program. In Matthew 25:42, the Bible talks of Judgment Day when God judges those who did not follow His command:

Pres. Trump should be reminded of these words: “I was a stranger and you did not invite me in.” God might add “In fact, you deported me.”