LOS ANGELES — A new website was launched this week as a part of an initiative to combat and prevent exploitation, abuse and trafficking of Filipino migrant workers who hold temporary work visas in the United States. 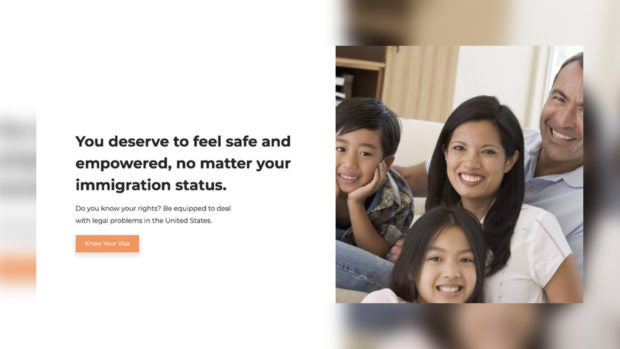 The legal and civil rights nonprofit organization Asian Americans Advancing Justice-Los Angeles (Advancing Justice-LA) launched “Ang Karapatan Mo Sa America (Your Rights in America),” an online resource in English and Tagalog that lists rights as well as helpful tips based on the visa provider and/or the specific visa currently held.

“What we have seen in our work is that a disproportionate number of our human trafficking clients are Filipino, and too often they would come to us with help for applying for visas, specifically a T visa, and would often come back to us many years later after they’ve left their human trafficking situation, and so that makes it difficult,” Christopher Lapinig, the Filipino American staff attorney for Advancing Justice-LA who created the Karapatan Mo initiative, told the Asian Journal.

Lapinig said that the sooner that workers know their rights and “establish a foundation of knowledge” of what trafficking and worker exploitation is, the sooner they can identify whether they’re being exploited and can seek legal action.

“As more time lapses, it makes it more difficult to look for other forms of legal action that they could take like suing their employer or trafficker, so part of the rationale for us was to help people understand their rights and recognize that their rights are being violated sooner rather than later so they could leave their problematic situation and find legal assistance more quickly,” Lapinig noted.

A majority of immigrants who hold a T visa — a special visa for human trafficking victims and their families — are Filipinos who have been brought from the Philippines by recruiters often with the promise of good pay and a pathway to citizenship.

Lapinig also noted that the website is also designed for Filipinos who haven’t left from the Philippines yet but may be targets of human trafficking “so they can identify potential problems with their recruitment situations so they can avoid getting trafficked in the first place.”

Although a vast majority of Filipino trafficking victims are domestic workers, hotel and hospitality workers, teachers or caregivers, anyone in any industry could be recruited and duped into a job that isn’t at all like they were promised.

Through the Karapatan Mo website (www.karapatanmo.com), workers can submit a “completely confidential” message to request legal counsel free of charge from Advancing Justice-LA.

Often, workers who find themselves in trafficking situations are afraid to report or seek advice for fear of their immigration status being revealed or retaliation from their employers.

Lapinig also noted that Karapatan Mo seeks to combat human trafficking by empowering workers rather than preventing them from seeking employment in the United States at all.

Earlier this year, the Trump administration placed a temporary ban on H-2A and H-2B visas for workers from the Philippines because, according to victim reports to the Department of Homeland Security, Filipino migrant workers were particularly susceptible to human trafficking and abuse.

“The ban on Filipinos participating in H-2 programs seems like a perverse way to respond to that information because Filipino workers have been effectively doing what they should be doing which is stepping out of the shadows and reporting the crimes that have been committed against them,” Lapinig said. “Data shows that Filipinos are coming out and reporting human trafficking, so to penalize an entire country and population of people for doing exactly what the law sets out to do is wrong.”