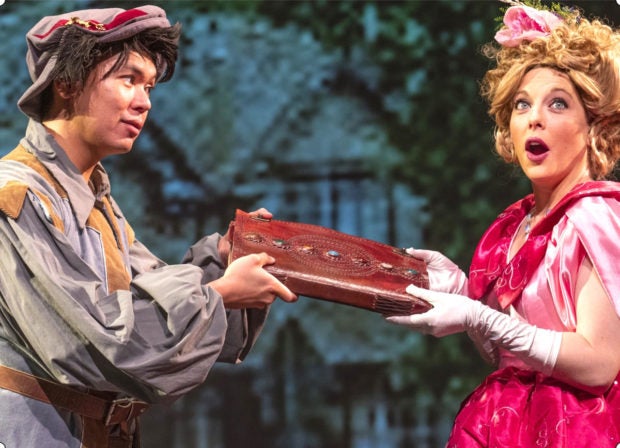 A new character in this updated version by Douglas Carter Beane of the classic musical, Jean-Michel is a passionate peasant rebel who is in love with Gabrielle, one of Cinderella’s stepsisters.

Jean-Michel and Gabrielle oppose the kingdom’s oppressive laws—which have been approved by the orphan prince as he has been misled by the villainous prime minister—which inspires the couple to start a revolution.

This production will have a full orchestra. Music Director is Daniel Feyer, with choreography by Lee Ann Payne.

Unlike Richard Rodgers and Oscar Hammerstein II’s other musicals, “Cinderella” was not originally written for the stage. It was created for television broadcast and featured Julie Andrews in the lead role.

In the 1997 television adaptation of the musical, Fil-Am actor Paolo Montalban played the prince. He then reprised the role in the 2000-01 national tour of the musical’s stage adaptation.

Sharing the stage with Martinez in Foothill’s production is fellow Fil-Am actor Juan Castro, who is playing the prime minister’s crony Lord Pinkleton. As he was growing up, he played a number of instruments in school bands and ensembles, eventually writing lyrics and composing music for his ska and punk band in high school.

He credits a teacher at San Jose State University with bringing him into the fold of theater.

“Janie Scott was my professor in one of my classes during my first year. She introduced me to Musical Theater. She had me audition for the musical theater company Company One and cast me.

“At that point, I hadn’t really done much other than perform in high school band. I immediately changed my major to Musical Theater and became a ‘theater kid.’

Martinez says the feels lucky to be working with Foothill Music Theater once again.

“My first show with them was ‘Side Show’ in 2017. It has been wonderful coming back. I have always been a big fan of how director Milissa Carey works. It’s always a blessing to get to work with one of best.”

He finds the addition of the Jean-Michel character to the classic Cinderella story relevant to current events.

“What this character adds is really emblematic of what is currently going on in our real world. Jean-Michel is an underdog relentlessly fighting a social class system. Who doesn’t love an underdog? Especially one who—spoiler alert—wins.”