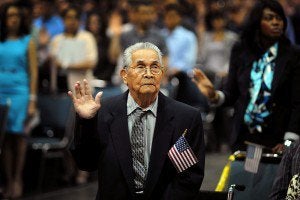 A Filipino centenarian being sworn as a US citizen. INQUIRER FILE

CHICAGO — Worldwide there were nearly half a million centenarians in 2015, according to the Pew Research Center. The most number of centenarians comes from the United States.

“We see centenarians every couple of months. We have seen a noticeable number of those aged mid-90s to 100 within the last couple of years,” said Devin Bezy, an associate at Haben Funeral Home & Crematory in Chicago.

Alternately, Simkins Funeral Home in Morton Grove, Illinois, has had only a couple of centenarian wakes within the last two years, with the recent one being 104, according to owner Richard Simkins.

A Pew Research report said that the population of ages 80 and older have grown rapidly since 1990. The US centenarian population has grown 65.8 percent over the past three decades, according to U.S. News and World Report.  Women are more likely to live to be centenarians –with an estimate of 61.9 percent compared with only 20.7 percent for men, the report said.

So far, 11 Filipino centenarians living and dead (in the Philippines and elsewhere) have been recorded, according to Wikipedia. Among them are Whang-od Oggay, 100, a tattoo artist; Manuel Rodriguez Sr., 105, a printmaker; Jessie Lichauco, 105, wife of the late diplomat Marcial P. Lichauco who helped secure Philippine independence from the US; and Helena Benitez, 102, administrator of the Philippine Women’s University.

In September, President Rodrigo Duterte signed into law the Centenarians Act of 2016 or (RA) No. 10868, granting additional benefits and privileges for Filipino centenarians.

Recently, the Philippine Embassy and the Commission on Filipinos Overseas (CFO) sent out a memo to Filipino centenarians living abroad, informing them to claim a monetary award of P100,000 cash (equivalent to $2,000). To avail of it, they must reach out to their consular jurisdictions and fill out an application.

Factors that contribute to an individual’s longevity are lifestyle, gender, genetics, health care, hygiene, diet and nutrition, exercise and crime rates, according to the Gerontology Research Group, a global research organization that verifies and tracks super-centenarians, people aged 110 years or over.