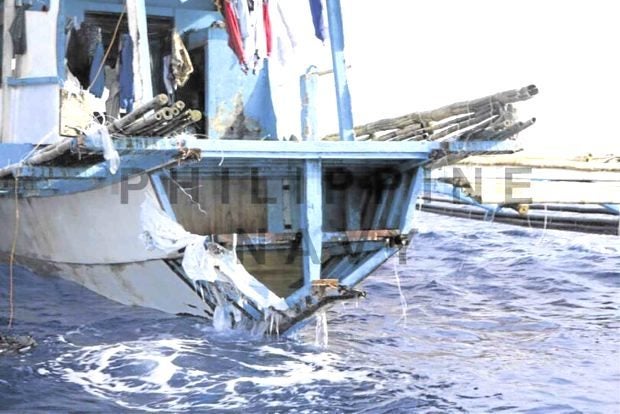 NEW YORK—On the night of June 9, a fishing boat—the Gem-Ver I, owned and operated by Filipinos—was operating in the waters off Spratly Islands, well within the coastal waters claimed by the Republic of the Philippines, and a three-day sail from Mindoro. Inexplicably, even though the waters were hardly crowded, the Gem-Ver I was rammed by a steel-hulled Chinese trawler, knocking out its radio and causing it to sink.

The Chinese then took off, not bothering to rescue the Filipinos, all 22 of them. Fortunately, a Vietnamese fishing vessel, reached by two crew members who rowed over for help, came by and took them in, giving them coffee and hot noodle soup. Had the Filipinos died, that would have been a clear-cut case of a massacre.

The Chinese admit to the ramming of the Philippine fishing boat, but claim it was an accident. If the ramming was unintentional, why then did they not rescue the Filipinos?

This affair comes as no surprise, driving home the point, if it was yet not clear enough, of China’s belligerence towards the other Asian nations that lay claim to the waters of the South China, and in the case of the Philippines, West Philippine Sea.

Since 2013, under Xi Jinping, Beijing has steadily militarized the disputed waters, building airstrips, garrisoning soldiers, and deploying cruise missiles in the Spratlys. Using a dubious, even laughable, so-called “nine-dash line” to justify its claim, China has essentially dared such countries as Indonesia, Vietnam, the Philippines, Taiwan, Brunei, and Malaysia to stop its sea grab. Mind you, the major dispute is not amongst any of the latter states, but between them and the once-sleeping colossus.

The prize is a vast ocean that has an abundance of fish and yet-to-be-tapped mineral resources, including billions of potential barrels of crude oil and trillions of cubic feet of natural gas. According to Wikipedia, “An estimated US$3,37 trillion worth of global trade passes through the South China Sea annually, which accounts for a third of the global maritime trade. 80 percent of China´s energy imports and 39.5 percent of China´s total trade passes through the South China Sea.”

In a legal victory for Manila, in its suit filed by the Noynoy Aquino administration before the UN Convention on the Law of the Sea (UNCLOS), the tribunal found, in July of 2016, that the People’s Republic of China had no basis for its maritime claims, where the Republic of the Philippines was concerned. Beijing has since ignored the tribunal’s ruling, which was to be expected.

Instead of using this legal victory as a solid bargaining chip and consolidating region-wide opposition to the unprecedented sea grab, since his assumption to the presidency in 2016, Duterte has in fact acquiesced to Beijing’s aggressive moves not just in the West Philippine Sea but even its incursions into Philippine coastal waters off the country’s Pacific coast. Thus, his reaction to the maritime incident of June 9 was, sadly, no surprise. He downplayed it, saying that no one died.

Critics have said his reaction has been one of appeasement, as has been true in earlier instances—so at odds with his loud-mouth persona and more importantly, his duty to preserve and uphold the Constitution, in this case, of the republic’s territorial integrity. (There are of course even more pressing charges of his betrayal of the Constitution, with regard to human rights and civil liberties.)

The crisis engendered here is a real one, unlike the drug war, really a manufactured one but one that as is so evident by now targets only the underclass—those without political standing and thus with no political clout—whose corpses continue to pile up.

One gets the sense, however, that the two crises, one real, one fake, are related. It is no secret that the main source of illicit drugs in the archipelago is China. Is it simply a coincidence then that the city of Davao, Duterte’s original fiefdom, seems to be a major port of entry for these drugs? Do the powers that be in Beijing have something on the president and his family that explains his reticence, similar to the way that the Russian government seems to inspire in Trump not just amity but even subservience?- Copyright L.H. Francia 2019