‘Tito Al’s’ bid for success got cracking with chicharron Tito Al with the author inside his warehouse stocked with boxes of chicharron. MANILA MAIL

Someone enters the door at a party, in a restaurant. Chances are, Tito Al knows him or her. This guy knows everybody, knows your kids’ names, even your mother-in-law’s name. He genuinely likes people. He’s not faking it.

He’s focused on others, not himself. That’s one of the secrets of his success in the food business. Of course, he’s determined to succeed.

“In grade school, my teachers taught us that the way to succeed in the future is to consider going into fields providing three basic human needs: food, shelter and clothing,” recalls Tito Al. “This was planted in my mind. So, I decided to go into food business.”

He landed a job as a factory helper, then shifted to sales for two American companies. Later, he started his own business.

“I found out early on that my experience in the Philippines as a senior Philippine constabulary officer, and as regional manager for Dole Philippines, did not count when I applied for a high position,” Tito Al points out.

“So, during my breaks working at a factory, I would scour newspaper ads for sales jobs. I applied at Nibbles, Inc., a potato chip and pretzel company in New York, as a route salesman in Washington DC. I got hired because no one wanted to work in that area due to rampant crimes. My military background helped. My strategy was to deliver to the stores together with a group of delivery route persons.”

It didn’t take long for Tito Al to become the top route salesman. The company promoted him to sales supervisor handling eight route salesmen. After eight months, he became regional manager, a reward for being the top team in sales performance.

“My experience in the military, Dole, and my sales and marketing college background finally paid off,” he says. “The field experience I gained in America gave me the confidence to resign and start a business.” 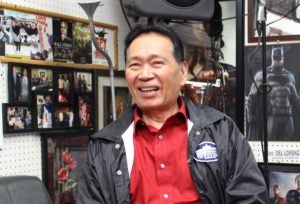 So, he left Nibbles and opened “Tito Al’s Chicharrones.” He had convinced the company to add the pork rind to its line of products. With Nibbles as the supplier, he started making chicharron deliveries, along with other Philippine food products, to five Filipino and Asian stores in the Washington DC metro area in 1985. Today, his clientele has grown to 500 stores, including military commissaries.

“I started the business with my son,” he says proudly. “My old company rewarded me with a starting capital of $15,000, which I used to buy a delivery truck. The company advised me to return if things didn’t work out. I did not borrow from anybody or get a bank loan. Instead, I rolled my starting cash to establish a good credit reputation. So most big importers trusted me with a 30-day credit terms.”

Among his bestselling products that bear his name are chicharron, bottled ingredients for halo-halo, bagoong, coconut juice, gata, dried noodles, and longanisa. His company has exclusive distribution rights to the top ice cream brands in Manila, Magnolia and Selecta, and a wide range of dry and frozen food products, sauces and noodles. 2A Marketing has expanded to import-export, manufacturing, sales and distribution of his “Tito Al” products.

Tito Al owns several fleets of delivery trucks to supply stores from New Jersey to Florida. He has 15 full-time employees, all of whom get their salaries two weeks in advance. What Tito Al learned in running a successful business he also shares with his staff — honesty, hard work, and discipline.

Tito Al’s dream is to sell more Philippine products in the U.S. and U.S. military commissaries all over the world. He believes this helps the Philippine economy and the country’s agricultural workers. His major competitors are business owners from China, Vietnam, Korea, and Japan.

Despite his success, Tito Al remains the same humble guy. He has generously given back to the community, supporting several projects and advocacies of Fil Am organizations in the metro DC area.  He has sponsored several Philippine Embassy events, and coordinated the dialogue between lawmakers and community to address issues that affect them. He generously sponsored the annual Asian Festival where the Philippine Village was the number one attraction.

And he loves to entertain. For over a decade now, Tito Al has hosted a group called the Tuesday Club. Guests would go to the warehouse after work on Tuesdays, sing karaoke, indulge in fine wine, a gourmet dinner and Tito Al’s products. Regular members are friends from the Philippine Embassy’s Defense and Police Attachés’ offices, journalists, Judge Dave Valderrama, and visiting Philippine military officers, elected officials, cabinet members and other dignitaries.

Tito Al immigrated with his family to the U.S. in 1979, joining his in-laws who had a flourishing medical practice in Gettysburg, Pennsylvania. His wife, Alpha, had a good job as a nurse at the Makati Medical Center when they decided to start a new life in the U.S. They have two children. Grace and her husband Doug Dougherty have two sons, Luke and Joshua. The only son John, still single, is managing the 2A Marketing.

“I hope my story inspires others who want to be successful in business,” Tito Al says. “Anyone can achieve their dream if they back it up with hard work, focus, passion for their job, genuine appreciation for others, flexibility and honesty.”