Mercy comes for the archbishop 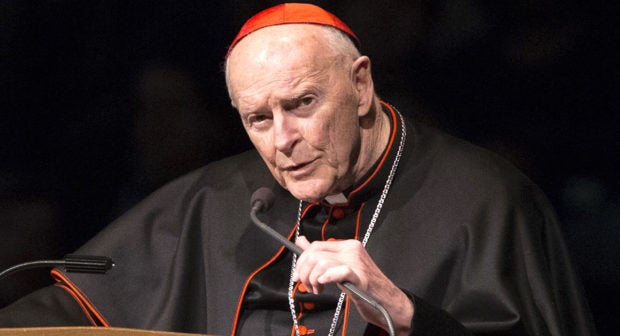 Imagine the day-to-day routine of the 89-year-old Theodore Edgar McCarrick, former Archbishop of Washington, DC. He committed sexual abuses, and that scandal, along with other controversies, was one big reason why the Catholic Church’s credibility went south and plunged so low.

For his wicked acts, he received the extreme canonical punishment. He was removed from office and defrocked. Found guilty, he fell from grace and was publicly condemned. And justice has been served.

Now comes Christian compassion, which is the human application of the Divine Mercy. Since September 2018, he has lived with the Capuchin Franciscans in their friary in rural Victoria, Kansas.

The friars are relearning the way of Jesus, who never scolded a sinner on bended knees. We have heard how the world has called the guilty like McCarrick — human waste, low life, wretched cockroach, a scumbag — and has judged him by the names of all insignificant insects that live in the sewage.

Now, in poor health and under a supervision, the weak McCarrick “follows the everyday life and routine of a friar… He lives in the same type of room as the friars, joins in the community prayers and the celebration of the Mass, and participates in community meals and interactions” (Fr. Joseph M. Elder, O.F.M. Cap).

In that community, scolding is absent. Only compassion is present! The picture of Jesus immediately calls to mind, particularly the image of Jesus telling the woman caught in adultery: “Neither I condemn you.” In that instance, one could right away savor the freshness of the Gospel!

Yes, they believe in both justice and mercy, but it was not easy for Bishop Gerald Vincke of Salina, Kansas, and the Capuchins to accommodate the ex-Cardinal. They know their decision will be hurtful to many people.

They had to reconcile their own feelings of anger and resentment toward McCarrick. For Bishop Vincke, “this purification of the Church… is painful, but much needed. We need the eyes of faith as we suffer through this.”

“Original freshness of the Gospel”

Given the situation, they needed to “recover the original freshness of the Good News” (Pope Francis, Evangelii Gaudium, 11). The Gospel, like the mighty sun after a storm, is indeed full of narratives conveying Christian hope and compassion.

Recall the stories of the prodigal son and the rich man Zaccheus. Recall how 0ur dear Lord reached out and forgave Matthew the tax collector, St. Mary of Magdala, and all those who failed him, well, Peter, the leader of the band, and how Jesus said He came to search for the lost sheep and not the self-righteous (Matthew 9:12-13).

Where else would they turn to in order to read and interpret the signs of the times but the Gospel of Jesus? In so doing, against all odds, what Bishop Vincke and the Capuchins did was deliver the Good News of God’s mercy to all wicked sinners, a powerful message of God’s hope to the hopeless.