North Korea: Trump Is the First US President to Enter North Korea

North Korea: Trump Is the First US President to Enter North Korea

In the sort of made-for-television, down-to-the-wire diplomacy relished by the former reality television host, Trump walked a few paces across the Demilitarized Zone on Sunday to greet North Korean leader Kim Jong Un, a day after the US leader proposed a meeting over Twitter. Trump, the first sitting US president to enter North Korea, said it was an “honor” to step across the 66-year-old military divide, while Pyongyang’s state media lauded the day as “amazing.”

In practical terms, Trump said that he and Kim agreed to start working-level talks on a denuclearization deal, ending a standstill in place since the two leaders’ second summit, in Hanoi in late February, ended without an agreement.

Secretary of State Mike Pompeo told reporters as he flew back that the talks will start “probably around the middle of the month.”

US officials say they want to lay more groundwork before another full-fledged summit, although they acknowledge that mid-level North Korean officials have little room to negotiate on Kim’s cherished nuclear program.

The New York Times, which did not identify its sources, said the Trump administration was considering an accord that would freeze but not dismantle North Korea’s nuclear program, effectively accepting it as a nuclear state and acknowledging that it will not budge further.

Such a deal would be at odds with the “final, fully verified denuclearization of North Korea” that Pompeo has insisted upon — and far less than the nuclear deal former president Barack Obama reached with Iran, from which Trump pulled out, calling it “terrible.” 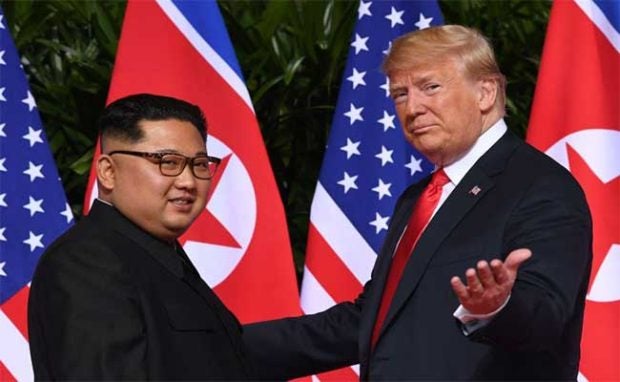 John Bolton, Trump’s national security adviser, denied the report and said that he and his staff had never heard of the idea of settling for a nuclear freeze.

“This was a reprehensible attempt by someone to box in the President. There should be consequences,” Bolton tweeted.

But critics said that Trump was already spending precious diplomatic capital by meeting Kim on his own terms and inviting him to the White House.

Rights group say that the North Korean regime holds tens of thousands of political prisoners in labor camps, with many locked up for even minor acts seen as disrespecting Kim.

“Our President shouldn’t be squandering American influence on photo-ops and exchanging love letters with a ruthless dictator,” said Senator Elizabeth Warren, referring to correspondence including a birthday card over which Trump voiced delight.

“Instead, we should be dealing with North Korea through principled diplomacy that promotes US security, defends our allies, and upholds human rights,” Warren tweeted.

“This is not a photo-op. Our security and our values are at stake,” Harris said.

Republican lawmakers praised Trump as showing leadership — but had earlier hailed him for not sealing an agreement with Kim in Hanoi.

Conspicuously absent from the Demilitarized Zone rendezvous was Bolton, an arch-hawk who mused before re-entering government about launching attacks on both North Korea and Iran.

As Trump was shaking hands with Kim, Bolton went to Mongolia, where pictures showed him meeting President Khaltmaa Battulga next to a Buddhist mandala painting.

Richard Haass, the president of the Council on Foreign Relations who served under president George W. Bush, said Bolton’s absence and subsequent comments indicated a “significant split” in the Trump administration on a final deal with North Korea.

In Hanoi, Pompeo and Bolton encouraged Trump not to accept Kim’s demands for an easing of sanctions without more progress on denuclearization.

US, South Korea to ‘Discontinue’ Major Military Exercise: US Official

But US officials say that there are steps that the United States can take short of sanctions relief as diplomacy proceeds.

Such measures include sending humanitarian aid for impoverished North Korea and establishing a limited diplomatic presence in the two countries’ capitals.