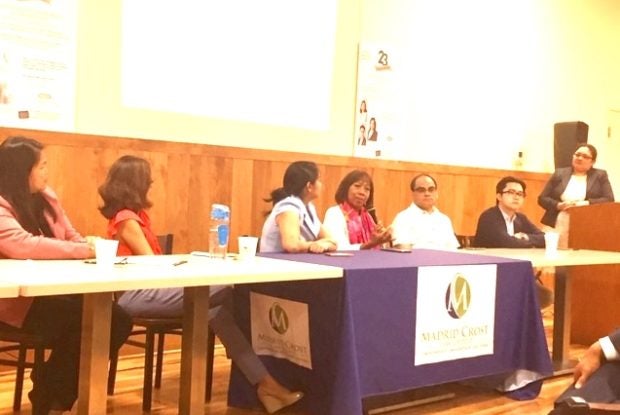 CHICAGO—Days before President Donald Trump’s scheduled order to Immigration and Customs Enforcement (ICE) to round up thousands of immigrants for deportation, city officials joined activists and advocates to inform immigrant residents of their rights and how to defy raiders who don’t a have specific court order for deportation.

At the Seafood City community hall in this city’s north side on early morning of June 22, a group of Filipino American lawyers led by Carmen Madrid-Crost went over a detailed process on how to avoid arbitrary arrest by the ICE team.

“You are not obliged to let immigration officials to enter your homes without a valid court order,” explained Karla dela Rosa, a practicing immigration lawyer.

“While fear can be paralyzing, this can be neutralized by knowing exactly what to do when confronted—their badges are not enough to get you intimidated,” another of the guest attorneys emphasized at the informational meeting.

Lawrence Benito, Filipino American executive director of the Illinois Coalition for Immigrant and Refugee Rights, said the group doesn’t want to create alarm or panic, but ICIRR is taking seriously Trump’s announcement  of ICE raids in Chicago and other sanctuary cities.

Benito said that his group has reached out to officials on the local, county and state levels to ask law enforcement to not cooperate with federal agents, particularly because of various immigration sanctuary laws that have passed in the state.

“We believe there is no way that they can pull off a large raid of this magnitude without cooperation with local law enforcement,” Benito said June 21.

Newly elected Chicago Mayor Lori Lightfoot announced that she gave instructions to Chicago Police Department not to share data of Chicagoans with ICE.

Notwithstanding Trump’s June 22 announcement that he is allowing a two-week delay before ICE fully implements his order to arrest undocumented immigrants with deportation order from the courts, a concerted effort to protect the rights of local immigrant populations proceeded with zeal and continuity.

“At the request of Democrats, I have delayed the Illegal Immigration Removal Process (Deportation) for two weeks to see if the Democrats and Republicans can get together and work out a solution to the Asylum and Loophole problems at the Southern Border,” Trump wrote on Twitter. “If not, deportations start!”

Lawmakers are mulling whether to give $4.6 billion in emergency funding to help border agencies struggling to manage a growing number of migrants crossing the border. The measure passed committee on a 30-1 vote. The bipartisan vote likely means that the Senate will take the lead in writing the legislation, which needs to pass into law before the House and Senate leave for vacation this week.

But Chicago Aldermen Carlos Ramirez-Rosa and Rossana Rodriguez continued to passed out “Know Your Rights” cards at train stations where vulnerable immigrants usually use. “We believe one immigrant taken from the community is too many,” Rodriguez said.

The Illinois Coalition for Immigrant and Refugee Rights set up a 24-hour hotline people can call to seek legal help or social services if a relative is arrested, Benito said.

“We have a rapid-response team ready to help families and individuals who are impacted,” Benito added.

The Lincoln United Methodist Church in the heart of Chicago held a meeting after June 23 Sunday’s service, and is helping families create an emergency plan in case their relatives are arrested.

But Trump’s order is not without support even among Filipino Americans. At a Chicago church with a predominantly Filipino immigrant congregation, a prominent member expressed approval of the President’s order of deportation. “This is the right thing to do…these people are a burden to us, taxpayers,” she said.

But a member of the Alliance of Filipinos for Immigrant Rights and Empowerment (AFIRE) responded, “That is very sad and ironic coming from an immigrant. There is really a great need to educate and to make others understand the value of immigrants in this country.”