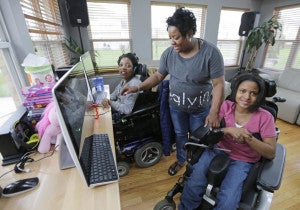 Low wages are among the causes of the severe shortage of home health care workers. ASSOCIATED PRESS

Acute shortages of home health aides and nursing assistants are cropping up in California and across the country, threatening care for people with serious disabilities and vulnerable older adults.

In Minnesota and Wisconsin, nursing homes have denied admission to thousands of patients over the past year because they lack essential staff, according to local long-term care associations.

In New York, patients living in rural areas have been injured, soiled themselves and gone without meals because paid caregivers aren’t available, according to testimony provided to the state Assembly’s health committee in February.

In Illinois, the independence of people with severe developmental disabilities is being compromised, as agencies experience staff shortages of up to 30 percent, according to a court monitor overseeing a federal consent decree.

The emerging crisis is driven by low wages — around $10 an hour, mostly funded by state Medicaid programs — and a shrinking pool of workers willing to perform this physically and emotionally demanding work: helping people get in and out of bed, go to the bathroom, shower, eat, participate in activities, and often dealing with challenging behaviors.

It portends even worse difficulties to come, as America’s senior citizen population swells to 88 million people in 2050, up from 48 million currently, and requires more assistance with chronic health conditions and disabilities, experts warn.

“If we don’t turn this around, things are only going to get worse” said Dr. David Gifford, senior vice president of quality and regulatory affairs for the American Health Care Association, which represents nursing homes across the U.S.

“For me, as a parent, the instability of this system is terrifying,” said Cheryl Dougan of Bethlehem, Pennsylvania, whose profoundly disabled son, Renzo, suffered cardiac arrest nearly 19 years ago at age 14 and receives round-the-clock care from paid caregivers.

“The problem is continuing to get worse because of our aging population and our economy,” said Susan Chapman, a professor at the University of California San Francisco school of nursing who researches health workforce issues. “When there are other opportunities in the economy, people don’t want to do this work.”

For years, experts have predicted that demand for services from a rapidly aging population would outstrip the capacity of the “direct care” workforce: personal care aides, home health aides and nursing assistants.

The U.S. Bureau of Labor Statistics estimates an additional 1.1 million workers of this kind will be needed by 2024 — a 26 percent increase over 2014. Yet, the population of potential workers who tend to fill these jobs, overwhelmingly women ages 25 to 64, will increase at a much slower rate.

After the recession of 2008-09, positions in Medicaid-funded home health agencies, nursing homes and community service agencies were relatively easy to fill for several years. But the improving economy has led workers to pursue other higher-paying alternatives, in retail services for example, and turnover rates have soared.

At the same time, wages for nursing assistants, home health aides and personal care aides have stagnated, making recruitment difficult. The average hourly rate nationally is $10.11 — a few cents lower than a decade ago, according to PHI, an organization that studies the direct-care workforce. There is a push on now in a handful of states to raise the minimum to $15 an hour.

The low wages are particularly a problem in Los Angeles and the San Francisco Bay Area, where housing prices are unaffordable for many. In California, the median hourly wage is $10 for personal care aides and $11.65 for certified home health aides. Workers rarely have health benefits and have a limited career ladder, all of which leads to high turnover, UCSF’s Chapman said.

Efforts are underway in California to expand training and provide health benefits, but wages are still a big stumbling block, Chapman said. And if California and other states don’t figure out a way to make the jobs more appealing, people’s “health will deteriorate and families might have to jump in,” Chapman said. “Some people just won’t get care and might end up in institutions.”

Even for-profit franchises that offer services such as light housekeeping and companionship to seniors who pay out-of-pocket are having problems with staffing.

“All the experienced workers are already placed with families. They’re off the market,” said Carrie Bianco, owner of Always Best Care Senior Services, which is based in Torrance, California, with franchises in 30 states.

Finding new employees was so difficult that Bianco started her own 14-week training program for caregivers nine months ago. To attract recruits, she ran ads targeting women who had left the workforce or been close to their grandparents. In exchange for free tuition, graduates must agree to start working for her agency.

Homebridge, a San Francisco-based agency for home care workers, is facing a “terrible crisis” in trying to employ workers in the Bay Area, said executive director Mark Burns. He said Homebridge has lost about 20 percent of its workforce of 500 just in the past 90 days.

“We are expending great efforts to recruit and retain, but ultimately believe the wages and career opportunities of this field have to be transformed in order to attract a new cadre,” he said in an email.

“A lot of franchises have opened and people will approach our workers outside our building or in the lobby and ask if they want to come work for them,” Kulp said.

Hardest to cover in Kulp’s area are people with disabilities or older adults who live at some distance from the city center and need only one to two hours of help a day.  Workers prefer longer shifts and less time traveling between clients, so they gravitate to other opportunities and “these people are not necessarily getting service,” she said.

It isn’t possible to document exactly how common these problems are nationally. Neither states nor the federal government routinely collect information about staff vacancy rates in home care agencies or nursing homes, turnover rates or people going without services.

Some of the best data available come from Wisconsin, where long-term care facilities and agencies serving seniors and people with disabilities have surveyed their members over the past year.

The findings are startling. One of seven caregiving positions in Wisconsin nursing homes and group homes remained unfilled, one survey discovered; 70 percent of administrators reported a lack of qualified job applicants. As a result, 18 percent of long-term facilities in Wisconsin have had to limit resident admissions, declining care for more than 5,300 vulnerable residents.

“The words ‘unprecedented’ and ‘desperate’ come to mind,” said John Sauer, president and chief executive of LeadingAge Wisconsin, which represents not-for-profit long-term care institutions. “In my 28 years in the business, this is the most challenging workforce situation I’ve seen.”

Sauer and others blame inadequate payments from Medicaid — which funds about two-thirds of nursing homes’ business — for the bind. In rural areas, especially, operators are at the breaking point.

“We are very seriously considering closing our nursing facility so it doesn’t drive the whole corporation out of business,” said Greg Loeser, chief executive of Iola Living Assistance, which offers skilled nursing, assisted living and independent living services in a rural area about 70 miles west of Green Bay.

Like other short-staffed operators, he’s had to ask employees to work overtime and use agency staff, increasing labor costs substantially. A nearby state veterans home, the largest in Wisconsin, pays higher wages, making it hard for him to find employees. Last year, Iola’s losses on Medicaid-funded residents skyrocketed to $631,000 — an “unsustainable amount,” Loeser said. 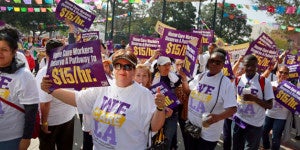 Home health care workers rally for better wages at Olvera Street, Tuesday, April 14, 2015, in Los Angeles. The union representing the workers says that despite performing the crucial task of caring for the elderly and people with disabilities at home, many of those workers in LA County live in poverty. ASSOCIATED PRESS

Wisconsin Gov. Scott Walker has proposed a 2 percent Medicaid increase for long-term care facilities and personal care agencies for each of the next two years, but that won’t be enough to make a substantial difference, Loeser and other experts say.

The situation is equally grim for Wisconsin agencies that send personal care workers into people’s homes. According to a separate survey in 2016, 85 percent of agencies said they didn’t have enough staff to cover all shifts, and 43 percent reported not filling shifts at least seven times a month.

Barbara Vedder, 67, of Madison, paralyzed from her chest down since a spinal cord injury in 1981, has witnessed the impact firsthand. Currently, she qualifies for 8.75 hours of help a day, while her husband tends to her in the evening.

“It’s getting much, much, much more difficult to find willing, capable people to help me,” she said. “It’s a revolving door: People come for a couple of months, maybe, then they find a better job or they get pregnant or they move out of state. It’s an endless state of not knowing what’s going to happen next — will somebody be around to help me tomorrow? Next month?”

When caregivers don’t show up or shifts are cut back or canceled, “I don’t get proper cleaning around my catheter or in my groin area,” Vedder continued. “I’ll skip a meal or wait later several hours to take a pill. I won’t get my range-of-motion exercises, or my wheelchair cushion might slip out of place and I’ll start getting sore. Basically, I start losing my health.”

Debra Ramacher and her husband have been unable to find paid caregivers since June 2015 for daughter Maya, 20, and son Michael, 19, both of whom have cerebral palsy, epilepsy and other significant disabilities. The family lives in New Richmond in western Wisconsin, about 45 minutes from the Minneapolis-St. Paul metropolitan area.

“At least three agencies told me they’ve stopped trying to hire personal care aides. They can’t find anybody and it costs them money to advertise,” said Ramacher, executive director of Wisconsin Family Ties, an organization for families with children with emotional, behavioral and mental disorders.

“It’s incredibly stressful on all of us, living with this kind of uncertainty,” she said.

Every few months, Ramacher tries to find caregivers on her own by putting ads up on Craigslist, in local newspapers and on job boards.

“We get a few bites,” she said. “Most recently, two people came and interviewed. One never got back to us; the other got a better job that paid more.”

In the meantime, she and her husband are being paid by Medicaid to look after Maya and Michael.

“We don’t want to be the caregivers; we want to have our own life,” Ramacher said. “But we don’t have any option.”

Senior Correspondent Anna Gorman contributed to this report. This story was produced by Kaiser Health News, which publishes California Healthline, an editorially independent service of the California Health Care Foundation.