On the President’s (Dis)Orders

On the President’s (Dis)Orders 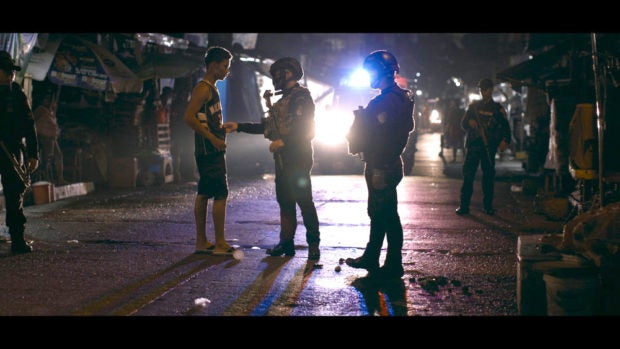 A scene from Olivier Sarbil and James Jones’ documentary “On the President’s Orders,” on the extrajudicial killings stemming from the government’s “war on drugs” in the Philippines.

NEW YORK— It’s a sunny day, an ordinary day, a busy day, people going about their lives, jeepneys, cars, and motorbikes moving along a main thoroughfare in Caloocan City, part of greater Metropolitan Manila.  On one side of the road motorized tricycles and their drivers wait for passengers. At the head of the queue a man sits, arms crossed, his young son restless in the cab. This is how he, along with the other drivers, supports his family: ferrying passengers to nearby destinations.

Two men on a motorcycle approach from the rear, and slow down briefly when they are abreast of the young father. The man riding tandem pulls out a gun and at pointblank range shoots the unsuspecting driver in the jaw, pauses, then fires again, this time hitting the victim in the chest. The assassins zoom away.

The victim staggers, approaches the drivers behind him, who are in shock, still processing what they have just witnessed. He collapses on the street. A crowd quickly gathers. Two of the drivers pick him up and put him in the cab of a tricycle and rush him to the hospital.  But it is too late: the man is dead, another casualty in President Rodrigo Duterte’s brutal war on drugs. 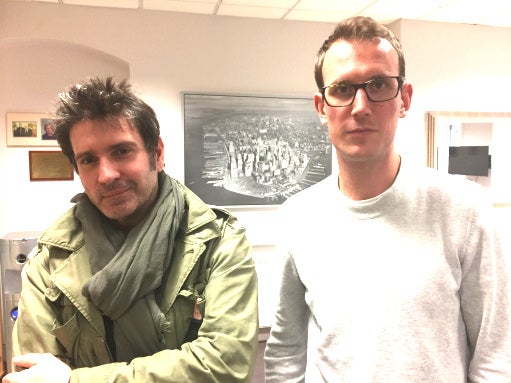 Olivier Sarbil and James Jones’ documentary on extrajudicial killings in the Philippines was part of the recently concluded Human Rights Watch Film Festival at Lincoln Center in New York. DOCSONSCREEN

Caught on a security camera, this slaying in broad daylight is the most horrifying scene in On the President’s Orders, a powerful and disturbing documentary on the human cost of this senseless war, based on a crisis manufactured by a warped mind. By Olivier Sarbil and James Jones, the film was part of the recently concluded Human Rights Watch Film Festival at Lincoln Center. It has yet to be screened in Manila.

Sarbil and Jones were embedded with the Caloocan police for four months, time enough for the duo to be the proverbial fly on the wall, with remarkable access to the police as they went on patrol in Caloocan’s slums, with lists of suspected drug users. No one wants to be on that list; to the cops, a user is as good as a pusher, whose extermination is devoutly to be wished.

The slums are thus viewed as hostile territory, and so the death-mask-wearing cops act as an invading force, intimidating and brutalizing the very people they are supposed to protect, civil rights be damned. Despite the reasonable rhetoric spouted by the church-going Caloocan police chief Jemar Modequillo—one scene has him bearing a cross during a Holy Week procession—these acts of state-sponsored violence give the lie to the gestures towards a common humanity the political establishment is so rehearsed in.

Speaking to Frontline, an independent news program for public television, Jones said, “Olivier and I just showed up to the Caloocan main police station and after 15 minutes we were sat in [the chief of police’s] office. Pretty much immediately he agreed to give us access. Quite quickly it became clear we could just wander around the police station and kind of talk to everyone. From then on, it was just a matter of me and Olivier winning the trust of the individual officers so they would talk to us honestly, take us on operations, and give us a proper insight into the work they were doing in the drug war.”

There are portraits too of those who live in the slums, such as Axel, a photogenic tattooed teenager and head of a neighborhood gang that is more disaffected than gangsterish, and for whom meaningful, sustainable employment would be a way out but is nowhere in sight. We find out later in the film that Axel is the son of the murdered tricycle driver, that he was with his dying father in that tricycle cab, imploring him to stay with him and not give up the ghost. He recounts all this in a seemingly dispassionate way, but underneath one senses a fierce resentment and hatred for those who treat him and his peers as “animals.”

One of the more fascinating characters is the owner of the local funeral parlor. He doesn’t occupy much filmic space but he starts to hold our attention as the grim realities accumulate. Laconic, with his porkpie hat, he is the embodiment of the Grim Reaper, summoned to ferry the dead to the next life, the neighborhood Charon. His pet dog might be Cerberus but he’s too friendly to be that.

Carlos Conde, of the Asia Division of Human rights Watch, has described the documentary as “an unflinching exploration of President Duterte’s brutal ‘drug war’ and its devastating impact on thousands of mostly poor Filipinos.”

Sarbil and Olivier are wise enough not to make their work overtly judgmental. Not that there is any need. For the facts presented here speak volumes, about the abhorrent injustices that the poor suffer, about their dead-end lives, about their dreams that die early on in the face of a society, and a hypocritical, morally bankrupt government, that doesn’t give a damn.