How Simbang Gabi got started in San Francisco archdiocese

How Simbang Gabi got started in San Francisco archdiocese 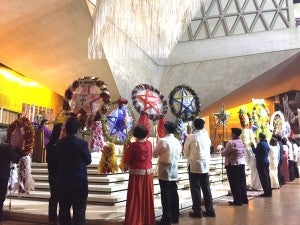 A Simbang Gabi Commissioning Mass, was held this year on Dec. 6 atat the Cathedral of St. Mary of the Assumption, with Auxiliary Bishop William Justice as the Main Celebrant. CONTRIBUTED/Edgar Estonino

SAN FRANCISCO — The dancing hues and sparks from the fire in our rustic clay stove mesmerized me. Mother asked me, a child of maybe five then, to watch the fire, to make certain it remains stable, does not die out and is contained. I focused on my watch, ready to call for her if needed. I later rejoiced that the fire remained stable, ready for the pot in which our meal was to be cooked.

This image reminds me of the focus and effort that brought our centuries-old tradition, Simbang Gabi, to the liturgical life in the Archdiocese of San Francisco.

I came to this country in 1984 on a job transfer, leaving behind a family of nine siblings, a promising financial career in the Lopez group of companies and a life well entrenched in my parish as a lay leader. The Church is my second home. With a missionary spirit that urged me to bring my faith tradition to this adoptive home, I sought ways to be actively involved in the parish. Conscious of my “accent” then, I joined the choir, for music does not show any. It was my entry point to parish involvement. 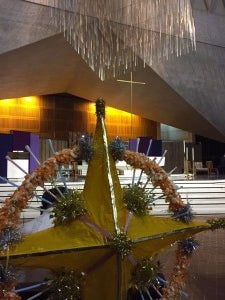 Then I learned that there were parishes with Simbang Gabi, held not in the main church, but in the halls or chapels. Most pastors then were non-Filipinos who probably saw the gathering as a social event. Held in the early morning hours, it almost seemed like an underground activity. I thought there must be ways to bring this tradition from the shadows and in to the mainstream.

So I wrote about it to the diocesan paper, and there began my collecting “tinder and firewood” to build a fire to showcase a beloved faith tradition.

Established in 1953, the Archdiocese of San Francisco gathered early immigrants – Irish, French, German, Italian and Portuguese. There is no known devotional cultural practice or tradition from them that has influenced the liturgical life in the Archdiocese as much as Simbang Gabi.

Approximately 45 of the 90 parishes–from San Mateo, San Francisco and Marin counties, which make up the Archdiocese of San Francisco–celebrate Simbang Gabi, either singly or jointly with other parishes. There are now 16 Filipino pastors, with Rev. Raymund Reyes holding the highest position as the Vicar for Clergy. 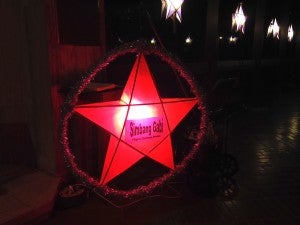 At St. Stephen parish near San Francisco State University, Simbang Gabi began in 1996, celebrated at 6 a.m. with 8 neighboring parishes. On this 20th year, Archbishop Salvatore Cordileone will be the celebrant on opening day, Dec. 16, with the Auxiliary Bishop William Justice closing on Dec. 24.

A Simbang Gabi Commissioning Mass, which includes a rite by which Filipinos are sent forth to bring the light of Christ to our communities, will be held this year on Dec. 6 at 7:30 p.m. at the Cathedral of St. Mary of the Assumption, with Auxiliary Bishop William Justice as the Main Celebrant.

In 2008, then-Archbishop George H. Niederauer initiated a Simbang Gabi Commissioning Mass at the Cathedral and it has been held annually ever since. Pope Benedict XVI himself sent a letter in 2008 stating his “prayerful support and apostolic blessing to all Filipinos on the occasion of Simbang Gabi …in San Francisco…”

My vision is for Simbang Gabi to remain a major event in the liturgical life of the Archdiocese of San Francisco for many more centuries, as it has in our ancestral homeland.

Nellie Hizon is a paralegal with Dentons US LLC, member of ALLICE Kumares and Kumpares, and former Vice Chair of the S.F. Archdiocesan Pastoral Council.