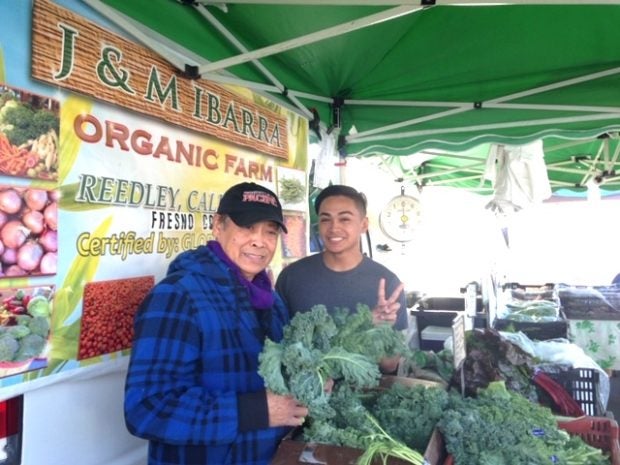 DALY CITY, California — It’s the crack of dawn, a chilly start to what promises to be another sizzling early summer day at home in San Jose, California.  But United States-born Ron Cruz is up and ready:  He layers up and lugs a jacket too, knowing where he’s headed today.

While the valleys and plains of inland San Francisco Bay Area swelter in the year’s first heat wave, the coast gets a gift of that familiar fog, sparing denizens from misery and sunstroke.  And that’s ideal for Cruz, a twentysomething whose Saturday mornings are blocked off throughout the year to buddy up with his father, Roger Cruz, here at the in Daly City.

Market regulars look for Cruz father and son at their booth often sandwiched between one offering egg and balut, and the other spread with clumps of leafy vines often discarded in western cookery but treasured by Asian chefs.

Standing behind the tarp identifying theirs as J&M Ibarra Organic Farm, Roger and Ron know their customers by name if not by face, alerting them on the bounty of the day.

Tomatoes are absent from the bins on first week of June, when the orbs are still green and without fragance.  Come toward the end of the month, recommends Roger — endearingly called “Manong” by longtime shoppers — when tomatoes are sweetest and rightfully deserve the botany classification as “fruits,” being ripened ovaries with seeds.

The scent of rich soil will soon fade as seasonal basil and dill dominate the perennial rosemary, parsley, scallions, coriander.  Carrots in colors of the rainbow catch the eye, as do the large heads of lettuce and bunches of chard and kale with their roots intact. 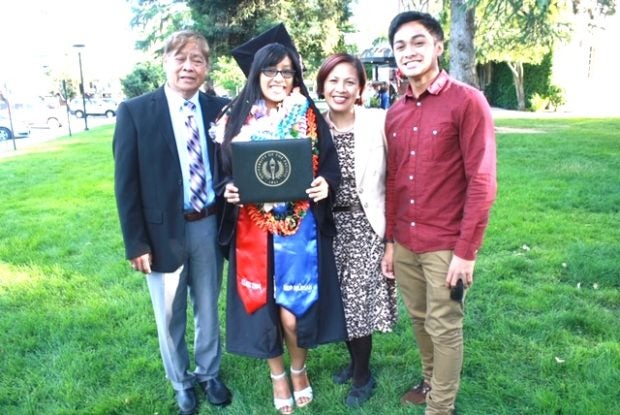 The graduation of their children, Leah and Ron, is a major milestone in Ron and Leonora Cruz’s journey as a family of proud organic farmers.  CONTRIBUTED

“Hi guys,” a smiling Ron greets a contemporary who’s ogling the verdant display but seems to have no agenda other than to escort his grandmother on her weekend hunt.  “We have a lot of mint,” he volunteers, perhaps envisioning a few mojitos after sundown?

“Maybe, maybe not; we’ll see,” he says, still smiling at the kibitzer looking for fennel.

What’s a young guy doing here when the schoolyear just ended? He gets small talk.  Shouldn’t he be elsewhere playing digital a game with virtual opponents or taking in a rom-com with a date?

“Not on Saturday, Auntie,” he responds, referring to every Filipina obviously born long before him by the common term of respect in his ancestral homeland. “I work with my dad Saturdays.”

Roger’s eye darts at his son, and the identical smile appears on his face upon hearing the voluntary declaration of filial duty.

Like his sister, Leah, a music therapist with a degree from the University of Stockton who coordinated fund raisers for survivors of Typhoon Haiyan in the Philippines and actively participated with the Kilusang Pilipino and Little Manila Foundation, he values his heritage, hence his involvement in the Filipino Youth Coalition of San Jose.

Ron’s heart is set on attending San Jose State University and earning a major in Business Finance and Accounting.   He says he hopes to someday be a CEO of a company.  But first he is mastering the art of the sell, getting a deep understanding of the demand for fresh, ethical, organic and local as opposed to detached, cruel and manufactured.  He lets the produce star in an attractive presentation.  He answers every question, never pushes, and always closes a sale with the magic words of gratitude.

The younger Cruz keeps watch over the cash box, while Cruz pater works the diverse crowd. More than one consumer will launch into Tagalog or Ilocano, the Philippine language of his childhood, in a bid for a discount.  But Manong Roger takes pride in his produce, pledging its virginity from fertilizers or pesticides, and so take plenty of human attention to grow healthily: Isn’t it worth another dollar per pound to enjoy arugula free from carcinogens?  And that’s why they are one of if not the only organic produce vendors in this market.

The shopper happily takes 3 bags for $5.

Nothing but water and loving hands touch their edibles grown closer than within 100 miles from their home, as defines “local.”

For produce to be certified “organic,” provenance must abide by strict requirements.  Produce should be grown only with allowed substances, for example, and minus “excluded methods such as genetic engineering, ionizing radiation or sewage sludge.”  Farming is overseen by an authorized certifying agent of the USDA National Organic Program.

Anyone who makes the mistake of questioning the authenticity of his produce earns a quick retort from both Cruzes.  Don’t accuse him to false advertising.

Once in a while, a customer will look at the signage and refer to Roger as “Mr. Ibarra.” Cruz takes no offense and will correct the misimpression.  The farm is named after the family, he may say while weighing fresh shelled peas.

Occasionally his wife Leonora Cruz helps out.  She would be the one to explain the connection between her husband and the farm’s name.

“Dad’s sister married a man who owned 200 acres of agricultural land,” the real estate broker reveals her term of endearment for her life partner.  “When he passed away, the family helped my sister-in-law with the distribution of the harvest.” 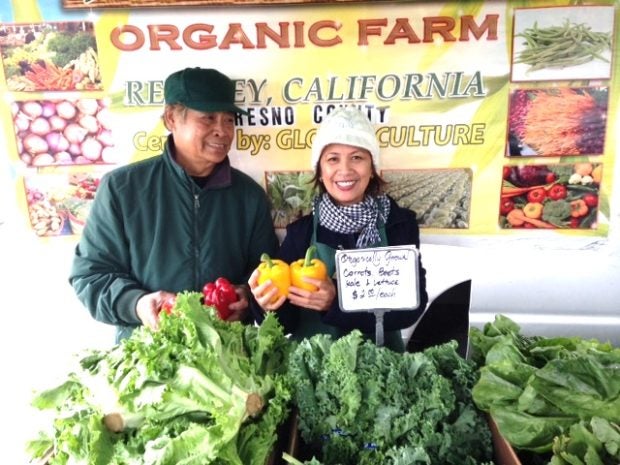 A spectacle unfolds every weekend when first and second generation Ibarra relatives arrive at daybreak in San Jose to collect their precious cargo.

“You should see them move briskly, choosing their vegetables, dividing the lot and hoisting the bins onto vans – all of seven going out to different Farmers’ Markets,” Leonora Cruz says in amusement.

Rain or shine, Roger and Ron park their white chariot in the same spot in the parking lot of the mall and are all set up long before the market opens 9 a.m.  Except this past winter’s end when the entire family flew to the Philippines for a month-long vacation.

As summer comes to full flower, Roger and Ron tighten the partnership that makes theirs a year-round Father-and-Son’s Day.