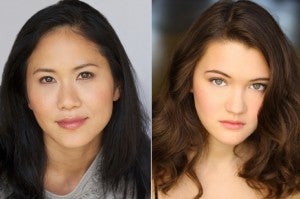 LOS ANGELES — Actors Deedee Magno-Hall and Isa Camille Briones will play mother and daughter, respectively, in East West Players’ staging of the musical “Next to Normal.”

With music by Tom Kitt and libretto by Brian Yorkey, this Tony Award and Pulitzer Prize winning musical is about how Diana’s mental health conditions affect her spouse Dan and daughter Natalie.

Magno-Hall takes the role of Diana and will act alongside her real-life husband Clifton (who is of partial Filipino descent), who plays Dan. Both just recently concluded the national tour of another Kitt-Yorkey musical, “If/Then,” starring Idina Menzel.

Isa Briones is making her East West Players (EWP) debut with the role of Natalie. Her surname may sound familiar to theater aficionados. Her father, Jon Jon, is currently playing in a little musical on Broadway titled “Miss Saigon” as the Engineer.

He says, “I’m very proud of my daughter and have always been. She’s a wonderful, insanely talented, kind-hearted person and I’m very excited that she’s making her EWP debut. They do great work.”

“I know it’s important to her that she connects with her Asian roots and be recognized in the Asian theater community,” he adds.

Unfortunately, he won’t be able to catch his daughter’s show due to schedule conflicts. “But I’ll be cheering her on, as well as my other friends in the show, from here in New York City. If it’s extended there may be a possibility of my going.”

When she first found out about the auditions, Isa signed up right away even if she’d just previously played the same role for Pico Playhouse Theatre. 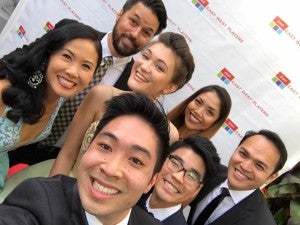 While she was excited to land the role, Briones got even more “ecstatic when I realized that Deedee and Clifton would be playing Diana and Dan!”

“I’ve known them since I was little, and I consider them my auntie and uncle so getting to work with them for the first time is a dream come true.”

Briones, whose mother Megan and brother Teo are also actors, says it’s surreal to work with her “auntie” for the first time.

“We’ve only just started rehearsals but so far it’s been really amazing. We’ve been doing some intense work so far, really digging deep into the play itself and the characters.”

“Diana and Natalie’s relationship is so beautiful despite the pain and the hardships. It’s really just about a daughter needing her mother.

“I can’t wait to explore those basic yet powerful emotions with Deedee. She’s such a talented and inspiring woman. Getting to play opposite her in such an emotional and intimate piece is going to be a great artistic journey.”

“I’ve known Isa since she was about two years old, and I’ve watched her grow into an intelligent, talented and beautiful young woman, inside and out. I’m such a proud auntie, and I am thrilled to be playing her mother in this show!”

She’s excited to play Diana. “I live for roles that are complex and far from (or close to) my reality. There is so much to play with and dive into as an actor. It’s part of the love of playing pretend.

“Our wonderful director, Nancy Keystone, has provided us with plenty of research about the medical condition of Diana’s character.”

She’s also done her own research, interviewing friends and family that have dealt with mental illness and memory loss.

“That has been helpful in trying to understand in some ways, but of course not completely, the severity of the disease. All I can do is try my best to use what I know and hopefully bring some truth to the character.”

Both Magno-Hall and Briones point out the universality of the musical’s characters and their circumstances. “It can be the story about any family, anywhere in the world, regardless of race,” says Magno-Hall. 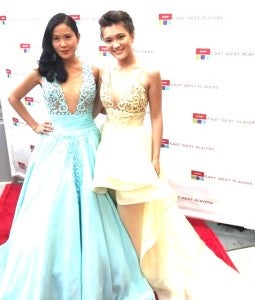 “I’m so happy that EWP exists, giving many actors and artists of color an opportunity to play roles they would not usually be considered for. I do hope the entertainment industry in general continues to take more chances with colorblind casting. My friend, Pearl Sun, an actor of Asian descent, played the role of Diana on the national tour, which I thought was pretty cool.”

Briones says that EWP allows audiences to gain “a different perspective and understanding from an Asian American point of view.”

“Talking about mental illness specifically in the Asian American community is extremely important, too, as it is not talked about enough on a social level and in the home. It is often prevalent in the Asian culture that such things be kept behind closed doors which may prevent people from getting the help they need.”

Tickets and details at Eastwestplayers.org.