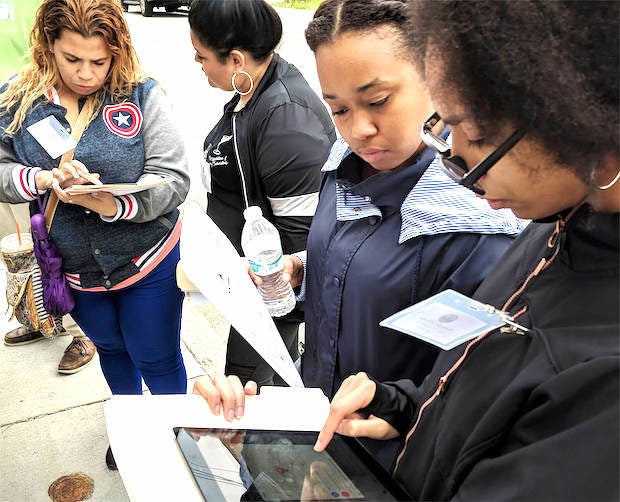 The Census Bureau said it expects to hire about a half-million people nationwide to help in its all-important counting of everybody living in the United States, something the government has done every 10 years since 1790.

That half-million hiring target is a sizable decrease from the last census, in 2010, when the bureau was more dependent on shoe leather than silicon to get the work done. Instead of the 635,000 people hired in 2010 to knock on doors to fill out questionnaires with people who hadn’t gotten theirs to the mailbox, in 2020, for the first time, the government is counting on people filling out their forms online.

The half-million Census Bureau jobs are open to any U.S. citizen who can pass a background check, is at least 18 and possesses a Social Security number. In California, census officials project they will fill or already have filled about 12,800 positions.

“It’s a relatively fluid number, just a projection,” said Celeste Jimenez, assistant regional census manager based in Los Angeles. That’s because for “enumerators,” the biggest category of census workers, the number of people hired will depend on how many people didn’t complete their census questionnaires promptly next year, leading the Census Bureau to hire people who know their communities and languages and can go out into the field and come back with completed questionnaires from the non-responders.

This year, the Census Bureau is focused on setting up and staffing offices across the country and checking and updating the list of addresses used to send people reminders and instructions on filling out the 2020 Census questionnaire online when it is released in mid-March.

In California, where there will be 30 census offices up and down the state, the administrative jobs ꟷ mostly already filled or due to fill soon (https://census.gov/about/regions/los-angeles/jobs/california.html)  ꟷ are expected to last all the way through till the census gathering is completed next summer, at a pay scale ranging from $18 to $51 per hour, depending on the assignment and the location.

The next wave of hiring, for “listers” who will do the address verification work this year, is under way. Those jobs pay from $16.50 to $33 per hour and are expected to last only for a couple of months, including paid training.

To apply for these positions, go to https://2020census.gov/en/jobs.html. Yolanda Lazcano, recruiting coordinator for the “Los Angeles Region” ꟷ which covers the entire West Coast from California to Alaska, plus Hawaii, Idaho and Nevada ꟷ is hoping to recruit 11,000 applicants for approximately 3,500 lister positions in California.

Next year, after mailings are sent out with instructions on the legally required process of filling out the census questionnaires, the biggest wave of hiring will begin: for “field staff” or “enumerators” to do the “non-response follow-up” work that in large part consists of knocking on doors at addresses where residents didn’t file completed questionnaires.

These positions also will be filled through the Census Bureau website: https://2020census.gov/en/jobs.html.

The Census Bureau hopes that having people file their questionnaires online will yield billions of dollars in savings on the shoe leather it’s always needed to get those questionnaires completed. It expects at least half of the country’s more than 300 million people to take the online option.

Nonetheless, Lazcano expects that each of California’s 30 census offices will need about 300 enumerators.

In the past, with questionnaires submitted through snail mail, the cost per person of gathering census data had grown to $92 in 2010, from just $16 in 1970, as measured in constant dollars.

The ability to bridge language barriers will be invaluable, and in fact is a requirement for some of the managerial positions the Census Bureau still has open in California, such as this one for a Spanish speaker in Bakersfield (https://census.gov/about/census-careers/opportunities/positions/region-field/cfm/LARO-CFM-CA22.html) or this one for a Chinese-language speaker in the Contra Costa County city of Concord: (https://census.gov/about/census-careers/opportunities/positions/region-field/cfm/LARO-CFM-CA47.html). (The application period for those two positions closes June 14.)

The Census Bureau is touting its jobs as ideal for people just starting their working life who need to establish a record of reliability, for people who can use the frequently evening or weekend hours to supplement jobs they already have, or for retirees who would like to re-enter the workforce in a limited way.

As for the background checks, Lazcano said that hiring will be on a case by case basis, so having a felony conviction, for instance, isn’t necessarily a disqualifier.

Lazcano said bilingual census staff will be needed wherever 5% or more of a community is believed to primarily use another language.

Payday comes every week and people using their cars will be reimbursed. Although the jobs are in most cases temporary, the work occasionally can lead to a career.

The state of California also is devoting millions of dollars to help ensure that the 2020 Census includes everyone in the state. As of early June, there are just a few state of California jobs related to the census, listed here (https://census.ca.gov/job-opportunities/). But the state will not be hiring enumerators or listers. That’s the federal Census Bureau’s responsibility.

MOST READ
usa Renaming of California school after beloved Fil-Am teacher stirs controversy
usa Ye admits he “sees good things about Hitler.”
usa Kanye West reveals he caught Chris Paul with Kim Kardashian
usa Tenuto 2: The Only Male Vibrator Designed For Him With Her In Mind
usa 10 Signs Your Partner Is Emotionally Unavailable
usa Why Am I So Emotional? 10 Reasons Why and How to Handle It
usa Fil-Am leaders ask new top Dem House leader Rep. Jeffries to help Amerasians in PH
DID YOU KNOW?
25 Best Deals for the Holidays - Gift Guide 2022
Best Crystals for Protection Against Negative Energy
25 Best Holiday Deals: Top Brands to Shop This Holiday Season
Best Barbie Dollhouses 2022
Best Anime Mouse Pad 2022
5 Ways to Hack the Holidays with the Best Cash Back App
4 of the Best Holiday Gifts for Coffee Lovers